As we chug on towards more NJPW G1 Climax 25 action, I keep feeling bad that I have nothing to say about these tags. I try, I really do, but they’re so nondescript and formulaic I tune out immediately.

Hiroshi Tanahashi & Katsuyori Shibata have had a heated rivalry in the past year, and tonight they’ll continue that in their G1 match. They’ve had some absolutely brilliant matches in the past…will tonight be more of the same?

This was every six man you’ve seen on the tour. These are so formulaic at this point you even know who’s pinning who on every show. It wasn’t bad, just seen it enough. It’s not a knock on anyone, because actually I like everyone here, it’s just…so dull. Liger and Dorada had some good stuff while they were in. Kojima and Nagata went at it since they’re facing each other soon. Finlay and Taguchi were the ones left in the ring as they exchanged some good nearfalls, but you know the drill at this point – Taguchi pinned Finlay with the dodon. **1/2

This felt like night and day compared to the opener. Elgin really adds to these matches; not only is he adapting well in New Japan, he’s NEW. Thus, these constant tag matches at least feel fresh. Elgin and Anderson had a lot of interaction, and they had good chemistry with one another. White continues to show fire as a young lion babyface. Cody Hall…is continuing to improve. Anderson and White had some good interactions as well. White fell to the Stun Gun. ***

The usual tag match with Nakamura and Honma having some interactions. The end had Yoshi-Hashi and Captain New Japan doing their usual stuff when Yoshi-Hashi cuts him off and pins him with the Loose Explosion. Wish I could say more, but can’t for the life of me. **1/2

As you’d expect, Takahashi and Okada were the focus, though Gedo and Tama Tonga had good chemistry together as well toward the end. Tonga pinned Gedo with the Waistlock DDT. Yujiro took out Okada why whipping him into the guardrail immediately after the match. **1/2

Fale got the heat on Ibushi early by throwing him onto chairs on the outside then throwing an entire barricade on his prone body. Ibushi made a comeback with a huge moonsault that took out Fale on the floor. Fale made the comeback with a big lariat and the grenade for a near fall. He went for the Bad Luck Fall but Ibushi tried to counter into a hurricanrana. He failed, as Fale positioned him back for the Bad Luck Fall and pinned him. **1/2

Not that much of a match competitively, but it was fine for what it was. Naito was on offense for a lot of it, shoving the referee down twice along the way. There were several moments where Yano had control, which involved undoing the turnbuckle and Naito missing a splash, but this was very much Naito’s match. He low blowed Yano twice then pinned him with the Destino. **1/2

This was a good match, it wasn’t completely action oriented but they told a story and psychologically this was one of the better matches of the night. Mostly just back and forth early. A.J. started to work on Tenzan’s leg, though strangely not the one that bandaged up. He had in the Calf Killer at one point but Tenzan grabbed the ropes quickly. After working on him a bit, Tenzan mounted his comeback and went for the Anaconda Buster but A.J. escaped and dropkicked him. Tenzan tries for a moonsault but the leg is too injured as he collapses to the floor. Tenzan knees him low after a lionsault attempt and goes for the Anaconda Vise but A.J. gets to his feet as they go to the corner. Tenzan is distracted for a bit by talking to the referee which allows A.J. to hook Tenzan’s leg and applies the Calf Killer for the submission. ***1/4

Fine match, but nothing special — there was a lot of brawling on the outside and into the crowd with stairs and guardrails in play. Gallows hit the Gallows Pole at one point but Makabe kicked out. He went for it again but Makabe hit a lariat, a samoan drop then pinned him with the King Kong Knee Drop. Better than I thought it would be going in, but then again I didn’t think much about it until the bell rang. **1/2

Did you have any doubt that Tanahashi and Shibata would have an excellent match? This match immediately felt like more special than anything else on the card.

They started off with some mat wrestling. Both worked on each other’s legs, applying various submissions. The bulk of the match was intense back and forth contest, complete with stiff shots and some excellent moves. Tanahashi went for a charge to the corner but ducked as Shibata tried to hop over him, only for Shibata to foot stomp him on the face, which I’m sure wasn’t fun to take.

Tanahashi hit the High Fly Flow, then went for another but Shibata dodged the second one and put him in the sleeper. Shibata missed the penalty kick as Tanahashi went for a bridging pin and barely got two. Shibata tried to counter into a rear naked choke but Tanahashi floated over him and pins his shoulders on the mat for the surprise win. The finish seemed surprising at first but I’m sure this sets up a future match between the two. Easily the match of the night and one of the best in the tournament thus far. ****1/2

Final Thoughts: Night 13 of NJPW’s G1 Cilmax 25 was a one match show but man did that one match deliver. The card itself wasn’t bad but it just felt there until the main event. AJ/Tenzan is worth a look if you’re interested but just about everything else you can skip. 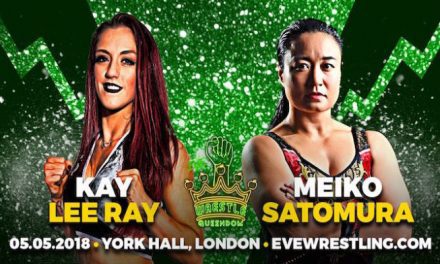