After two weeks of squash matches and holding patterns, the August 5 edition of NXT has actual matches and (almost) everyone gets an entrance and an announcement, AND there’s no Dana Brooke. That should be all you need to know to put this just under the G1 on your watch list this week.

Our first match is a doozy and, somewhat unsurprisingly, the Charlotte exit tour continues. Bayley’s win over Charlotte after Charlotte’s win last week puts Bayley at the top of the purely-NXT women’s competitors and in line for a title shot, hopefully at the Brooklyn Takeover.

This HAD the makings of a great TV match, but WWE did it again — they broke up a match on their own network to add a commercial. Once again, there’s no reason to interrupt a match that you produce on your network for a commercial. Play the commercials, I’m all for them, but put them between matches. This is a hill worth dying on.

The second half of this match, though, made up for the commercial break. For the first time in weeks and weeks, NXT’s weekly show had a match that COULD’VE been on a Takeover special. This match had all the near falls, big spots and submissions you expect from an NXT women’s main event.

We’ve known Bayley was the next woman in line for the title since the other three women were called up, but this still felt like a big win for Bayley. Let’s see her carry the division, at least it won’t be the Eva Marie Era.

Part of Kevin Owens’ interview with Michael Cole is recapped and includes some great Owens character work from Owens going after Regal’s character (the character of his character, to be specific), and calls the legitimacy of NXT’s commissioner into question. Owens even invokes the Montreal Screwjob and says, in order to make sure there’s no funny business, Owens vs. Balor II should be a ladder match. Owens walks out on the interview when Cole asks if he can beat The Demon. Nice one, Cole.

Bull Dempsey is not impressed with his montage from last week, which is too bad, because I definitely was.  Bull gave a valiant effort, but looked to be in trouble when a 225 lb bench press landed on his chest. To be continued…

Another garbage squash. The Corbin reboot is confusing. He never really stopped squashing people, but it seems like we’re starting over with him all the same.

Once again, it took me longer to write this than it did for Corbin to win. Full Sail is sick of this malarkey, apparently this is how you build heels in NXT.

Bayley asks for a title shot from Commissioner Regal who says she has to beat Becky Lynch next week to earn the title shot. How’s that for foreshadowing?

Solow doesn’t get an entrance, which doesn’t bode well for him, and he’s apparently an IRL item with Bayley, so he’s a shoo-in to be NXT’s biggest heel. Breeze makes short work of Solow and we probably won’t see him for awhile.

Commissioner Regal comes out after the match (lots of Regal this week, NICE!) and announces Breeze’s opponent for the Brooklyn Takeover who, if you’ve been living under a rock, is JUSHIN THUNDER LIGER! 1998 is stoked. Still, Liger has never wrestled in the WWE and the montage that followed Regal’s announcement was a classic WWE promo vid. Such hype.

Apollo Crews is almost here. You may know him as Uhaa Nation, but Crews is coming to Takeover in Brooklyn. No match announced, but he’ll be there. As an aside, Apollo Crews is one of the best names WWE has given an indy guy. Very hype.

Back in Regal’s office (more Regal!), he offers the Vaudvillains a tag title match at Takeover, but suggests they find a way to “curtail” Alexa Bliss. Cryptic.

Bull Dempsey is back to getting BULL-FIT! He was able to push the 225 lbs off his chest and his fitness was coming along nicely with the help of the wannabes in the performance center until he got to the tire flip. With the support of his pals in the weight room, however, Dempsey flipped the tire and reigned triumphant. If only fitness took less than one minute…

These two could’ve been headlining TNA in 2007, but I’m not mad about it being on NXT in 2015 for some reason.

This match started suitably physically, but guess what? THEY INTERRUPTED THE MATCH FOR A G-D COMMERCIAL. Don’t do it, WWE. Don’t do it.

The minute-long break broke up the whole pacing of the match, and they must’ve cut a lot because both Joe and Rhyno are essentially spent by the time the match is back. Joe picks up the win with the Muscle Buster after a pretty good back and forth for a TV match. The next couple of weeks will be interesting if only to see what Joe gets for Takeover and to see if Joe can truly hit his stride in NXT.

Final Thoughts: This was NXT’s first borderline must-watch episode in the Alex Wendland/Eva Marie Era. Tonight’s NXT was actually one of the best in a long, long time with Charlotte/Bayley as the highlight followed closely by Joe/Rhyno, the BULL-FIT promos, plenty of Commissioner Regal and exactly zero Dana Brooke. 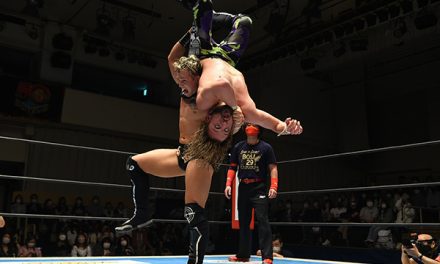