AXS TV and New Japan Pro Wrestling returned Friday night with more from the 2014 G1 and the line up was a good one. The show, from August 3, 2014 in Osaka, featured two outstanding matches: Katsuyori Shibata versus Tomoaki Honma and Shinsuke Nakamura going against Hiroshi Tanahashi. At the time, we raved about these matches ( and the entire show ) here but could this broadcast make what was great even better?

First, lets start our review with some great news. On Wednesday, AXS-TV and Japan’s TV-Asahi announced that a third season of New Japan’s World Pro Wrestling Returns will air on the network from August 14th through December 11th along with plans to extend the run into 2016. It is a clear sign that AXS-TV values the partnership and that New Japan Pro Wrestling continues to grow in popularity in North America on AXS-TV. With an average of 200,000 viewers per week, for matches that are in some cases a year old, it could very well suggest that New Japan is the biggest success story in North America this year. Trailing only the WWE and right on the heels of TNA ( who’s future is shaky at best ) in terms of most watched weekly wrestling programs, fans of New Japan Pro Wrestling could argue that NJPW is the number two promotion in the United States. Let’s not even factor the gate and ratings bump New Japan gives for promotions like Ring of Honor or Global.

This run on AXS-TV largely has to do with three factors – the in ring product has been on an incredible up-swing in the past four years, the outstanding broadcasting team of Mauro Ranallo and Josh Barnett makes the product easy to digest, and maybe the most important factor, it is being broadcasted in HD over cable television without signing up or subscribing to any other service. Every one of these matches shown on AXS-TV is available on New Japan’s streaming service New Japan World. The matches are complete and are not clipped. Yet, as the numbers suggest, most fans would rather press one button and watch on their television as opposed to having to jump through hoops to sign up, clear charges with a their bank or credit card, stream content to their media player, and then finally watch. This “one button” factor cannot be dismissed and AXS-TV has the inside track despite the network’s limited reach with some cable and satellite providers.

Ok, enough of this jibber-jabber. We have a show to review!

The show kicks off with Ranallo and Frank Shamrock ( filling in for Josh Barnett ) welcoming us and introducing Katsuyori Shibata and Tomoaki Honma to ringside. Wins, losses, and G1 standings are all discussed and Ranallo helps to get everyone up to speed. It’s a quick run down and it has to be as the match is edited down to about five minutes. Five minutes of non-stop, balls-to-the-wall, full court press, go-go-go action. You aren’t going to see anyone grabbing a hold here. Ranallo and Shamrock had to be double fisting the energy drinks to keep up and of course they kept up. I just picture Ranallo in a sound booth ankle-deep in empty Red Bull cans and Starbucks cups.

Oddly, the best part was that Ranallo knew when to let the action speak for itself and he didn’t say a peep. He let Shibata’s strikes speak for themselves and those strikes spoke volumes. I’ve said it before but Ranallo is a sports broadcaster in a pro wrestling announcers body. I am thrilled he calls my favorite promotion but sometimes I think the guy should be on a major network calling “traditional sports”. He has outgrown the confines of pro wrestling and I can only think of one other “wrestling guy” that I would say that for. Good God almighty.

Even better given his questionable start, Frank Shamrock crushed it on color commentary. Part fan who couldn’t believe what he was seeing and part fighting expert who has a passion for pro wrestling, Shamrock seemed more relaxed, less forced and provided more insight than in his debut. Call it jitters or mic-rust but Shamrock was a pleasure to listen to here and came off the bench swinging. In fact, by the time this is all said and done, Shamrock might be a better fit for this role than Josh Barnett. How’s that for a hot take? After the match, everyone’s favorite loser, Tomoaki Honma, had some words with the media.

“I can do this. I can keep going. I may not be the champion but I will make sure that people know I fought at this G1 Climax 24.”

This was a great, great segment and had me jumping out of my couch…and I’ve seen this match twice!

Back from a well deserved commercial break and what better way to kill an upbeat pace than with Yujiro Takahashi? Yeah, he isn’t my favorite ( is he really anyone’s favorite?) but this match versus Kazuchika Okada was passible given that it was heavily clipped and it did feature Okada. You could almost hear Ranallo’s energy level drain calling Takahashi’s offense just holding on until Okada made his comeback to get the win. Nothing terrible here but nothing to go out of your way to see. This is why God created fast forward buttons. Stop when you see the short gentleman in a Rainmaker head wrap. He had a lot to say.

“No matter how sneaky you are you are never going to be a match for the Rainmaker. If you want to compete with the Rainmaker come again after you’ve assembled a team.”

After the television break, we returned in studio with Hiroshi Tanahashi as he discussed his physical condition going into this match. If you remember back to last year, the rumor mill churned with reports that Tanahashi did some serious damage to his neck during last years G1. So bad in fact an emergency hospital visit was required.

“I think it was July 28th that I lost the Fale match and I hurt my neck. It was a state of emergency. I went to the emergency room and got X-rays. Nothing was wrong with the X-rays, but my neck still makes sounds. That was my situation in August’s second half of the match. So when I look back I was surprised I could carry on. The ‘New Three Musketeers which is Nakamura, Shibata and I…we were all placed in the same block and showed the audience our chemistry. New Japan impressed me by matching us. We were a trio ten years ago. This match brought back many different memories.”

Upon taking on Nakamura for the second time in the G1, Hiroshi had some thoughts that could possibly predict the future when it comes to the G1 Climax in 2015.

“They are wrestlers that I am excited to fight every time. The moment we face each other the fans totally get us. So when I look back on last year, I’d love to see more of it. We can gain something every time we do this. Not finishing it is the worst. It’s better not to do it if you’re not going to finish it. It wasn’t enough last year. That’s how much they mean to me.”

What more can be said about two wrestlers at the top of their game, in one of the most important events for the promotion, in a big match, in a big spot, with the best wrestling announcer in the business? Of course this was great but what added that extra layer was in fact very simple. The fact that it was simple – no shaking camera shots , no phony excitement, no silliness, nothing added that wasn’t necessary. The match started slow and built and built and built until you found yourself swept away with it. Renallo and Shamrock just hitched their boat to the the match and rode the ebbs and flows in the most natural way possible. They didn’t beat you over the head, they didn’t try to sell you a bill of goods that you didn’t need. When the energy was needed, they were there with the call. They gave what the match needed at the exact time it was needed. The announcing was natural, subtle, and full of life and energy but only when the match called for it. Renallo gives you exactly what you need to get the most out of the match and its like listening to your favorite song. This is an award winning performance set onto another level after Nakamura somehow ends up on his feat after Hiroshi’s attempt at a Dragon Screw leg whip and Shinsuke knocks Tanahashi into next week with a Boma Ye. Add a surprise Japanese Leg Roll Clutch (made famous by Karl Gotch) finish by Hiroshi and you have yourself a tremendous match.

After the match, Nakamura gives is take on dropping this epic battle against his long time foe.

“My first match I lost against Shibata. In the second half here in Osaka, of all odds, I lost against Tanahashi. I’m being nice, you know. This is emotional but luckily this is G1. I’m still in the game. My fight with Tanahashi and Shibata will never end as long as I don’t give up.”

The Ace, on the other hand, is a bit more upbeat during his in studio interview.

“After I hurt my neck I changed my fighting style. I didn’t intend on it at first but the idea came to me. A Japanese Leg Roll Clutch. I realized this later but that day was Karl Gotch’s death anniversary. The God of pro wrestling had given me power.“

Final Thoughts: What a fantastic show and one that ranks near the top for this season on AXS-TV. From top to bottom, it was one of those shows that flew by, grabbed you by the shirt, and hooked you in for the ride. An hour felt like fifteen minutes and it was almost disappointing it wasn’t a two hour show. If ever that “five more minutes” chant was more fitting, it was here on this broadcast. It was a joy to watch and the show might never see the “delete” button on my DVR. If only my Monday nights could be as good as my Friday nights. 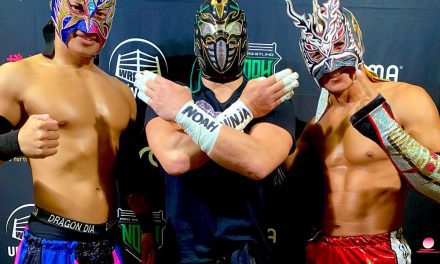