The first three 2015 New Japan Pro Wrestling G1 Climax shows could best be described as a mixed bag, with the tournament now rolling into Kagawa for Night 4.

Night 4, featuring the second set of B Block match-ups, was headlined by the IWGP Heavyweight Champion going against the popular Tomoaki Honma.

Night 1 featured two Match of the Year contenders supported by a very underwhelming undercard. Night 2 was a largely average show from top to bottom, while Night 3‘s matches received the most balanced reviews  of the first three offerings even if the high points couldn’t match the heights of Day 1’s spectacular Hiroshi Tanahashi vs Kota Ibushi and AJ Styles vs Katsuyori Shibata matches.

On paper, Day 4’s line up looked to be another show that could end up anywhere on the spectrum. The B Block isn’t as top heavy as the A Block, but it does run deeper with competent, veteran workers like Satoshi Kojima, Yuji Nagata, and Karl Anderson who are far less likely to lay eggs than the bottom feeder and gimmicky types who populate the lower end of the A Block. Only Yujiro brings the eye rolls in Block B, which means you’re always going to get at least four match ups that have a reasonable chance to be good. With that said, Kagawa didn’t receive the most stacked of B Block lineups. Aside from Kazuchika Okada vs Tomoaki Honma, which was a virtual lock to be very good at worst, each of the other four matches had questionable prospects coming in. Shinsuke Nakamura & Yuji Nagata didn’t exactly blow peoples doors off against each other at New Beginning in Sendai. Hirooki Goto & Karl Anderson were both coming off less than inspiring showings on Day 2. Yujiro vs anybody (in this case Tomohiro Ishii) is a risky proposition, and while Michael Elgin had looked great in his first two matches of the tour, including a killer singles match vs Okada, his match with Satoshi Kojima had just as much chance of flopping due to potential chemistry/familiarity issues as it had to be the sleeper match of the night.

The solid undercards on the shows have been overlooked, in part because many fans watching the shows on delay have skipped right to the tournament matches and haven’t bothered to watch. The pattern has been to pair the following nights G1 opponents off on the opposite sides of tag matches in order to build some heat and create a little juice. The key match-ups to watch here were Styles/Ibushi and Tanahashi/Naito working against each other respectively to set up the huge A Block show in Hiroshima on Sunday.

Gallows pinned CNJ with the Gallows Pole. A few nights earlier Hall, Gallows, & Fale made for a surprisingly decent trio, so with Tonga being an upgrade for Fale I thought maybe this could be good. Simple match layout, with Bullet Club jumping the faces in the aisle during their entrance leading to Tiger Mask as the babyface in peril. Liger took the hot tag and cleaned house with palm strikes, but moments later when things broke down CNJ ended up isolated with Gallows and that was that. I’m almost positive the face side made a total of two tags. As bare bones & simplistic of a match you will ever see. *1/2

YOSHI-HASHI scored a rare fall here, pinning Finlay following a Swanton Bomb. Since YH wins are so rare (we even got to hear his theme!) I’m not even sure if his version of the Swanton has a special name, so I’m going to go ahead and take liberties and dub the move “The Loose Explosion”. Please help me make this into a thing (looking at you, rogue Wikipedia editors). This was a better bout than the opener, helped tremendously by the charisma of Gedo & Yano (Yano has been money on this entire tour). Tenzan’s knee looks like it can give way at any second (then again, Tenzan’s body has looked this way for roughly a decade or so), so it was an absolute miracle he was able to have a match the caliber of which he had against Tanahashi. **1/4

This was a teaser for the big Styles vs Ibushi match taking place on Sunday, and both guys worked harder here than they could have gotten away with. Fale pinning White was inevitable, but in this case he used the Grenade instead of the usual Bad Luck Fall. I was glad White didn’t kick out. Little things like that are smart, because I think more of this roster (and more wrestlers in general) should occasionally win with a secondary finisher or setup in order to keep those moves strong, and a tag match like this is the perfect spot to do it. **3/4

This was pretty average, so this ended up not being the strongest night for the undercard tags after I spent an entire paragraph putting over how they’ve been sneaky good and overlooked. Taguchi took care of business against Komatsu to win it for his side, in a bout where nobody seemed interested in taking things to a second gear. Pass. **

Ishii put Yujiro away with the brainbuster, but the problem with this match was the same issue with Yujiro’s loss to Goto a few nights earlier. There is no need for the endless Yujiro control periods in these matches, both because he’s doing it against guys much higher in the pecking order than he is, and also because he’s terrible at it and it’s never compelling or interesting. Yujiro was never great, but he’s somehow managed to regress since that period around 2012 when he was at least passable and sometimes good. Technically he wasn’t bad here, as sometimes he ranges from sloppy to flat out dangerous, but these dominating match layouts don’t help because they do not play to his strengths (whatever those might actually be). Ishii was fine, with his usually tremendous selling and ability to connect with the fans. **3/4

Mike Elgin is certainly silencing doubters with his early performances in this tournament, with another very good showing here against the veteran Kojima. Another borderline **** effort, with tremendous pacing, clever psychology touches, and good drama down the stretch. Even the most ardent Elgin critics are having a hard time finding flaws in his work to this point, because a lot of his supposed flaws (working too fast, “getting his shit in”, selling) haven’t been prevalent at all. Elgin has not only been a pleasant surprise, he’s been one of the standout performers of the entire tournament. The finish here was great, with Elgin coming off the top turnbuckle but eating a Kojima lariat on the way down. Fun match. ***3/4

As good as Elgin has been in the early going, Goto has been just as disappointing. Perhaps we can give him a pass, as his first opponent was Yujiro, and Yujiro is Yujiro, and it appears they may be teasing a big run with Anderson, as he’s now pulled off two big upsets in a row. This was basically complete domination, with Anderson controlling 90% of the match, and hitting a Gun Stun out of nowhere when Goto finally started to get rolling on what everyone figured would be his big match ending comeback run. The finish drew gasps from the crowd as the fans seemed genuinely stunned that Goto not only lost, but lost in the manner in which he did. In a vacuum this was not a great match or anything, but I can give them a pass for not doing the traditional G1 mini epic style if this is indeed part of a larger Anderson story, and I could see others digging the match structure more than I did. ***

This blew away their match in Sendai earlier this year. Very slow start, which has me concerned about Nakamura since this is three major matches in a row where he has come off uninterested until the business end of the match, but they did manage to finish very strong. Both guys kicked out of their opponents respective finishes, which is not something overdone in New Japan (well, it is sort of overdone with the Bome Ye to be fair), so they had me buying in to several near falls. Nakamura ultimately didn’t even end up winning this with a Bome Ye, he won with a side kick to the face. The problem with Nak lately, and this has been with three different opponents (Goto, Anderson, Nagata) so I do think it’s fair point the finger at him, is that the early to mid portions of his matches have been uninspired and largely do not tell any kind of story. I’m not a hardcore psychology fetishist, but Nak’s early match malaise has been palpable lately. He could use a few blow away matches on the back end of this tournament. ***1/4

In stark contrast to the previous match, this was compelling all the way through. Compare Okada’s focused neck work to set up the Rainmaker to whatever it was Nak & Nagata were doing before their closing stretch. Listen to the crowd reactions to Honma as the underdog compared to the reactions Nagata received, and keep in mind that deep down nobody thinks Honma is ever going to win, especially against Okada, while there was a realistic chance Nagata could have beaten Nak. Kayfabe wise this looked to be a paint-by-numbers strategy win for Okada, working the neck, cutting off Honma at every pass, delivering a Rainmaker, and getting out of Kagawa with an easy two points, but then the absolutely sick Honma headbutt counter of the Rainmaker happened and all hell broke loose. From there the story changed from Okada barely breaking a sweat to fighting for his life, before eventually surviving the onslaught and securing the points.

Okada has taken some huge steps this year in terms of his overall match psychology and has firmly established a claim for best wrestler in the world. The Wrestle Kingdom match vs Tanahashi was a storytelling masterpiece on par with any match in the history of wrestling. His feud with Fale was something completely different from what he had ever been asked to do previously, and he delivered big time not only in the feud ending singles match, but also in the set up and the under the radar house show tags. His work on the first two nights of this tour making the completely unknown Michael Elgin look like a million bucks, and subsequently getting Elgin over in the span of two matches, is something that isn’t being talked about enough. Another thing not being talked about enough is Okada as a very serious Wrestler of the Year candidate. He’s currently on the best run of his already outstanding career. ****1/4 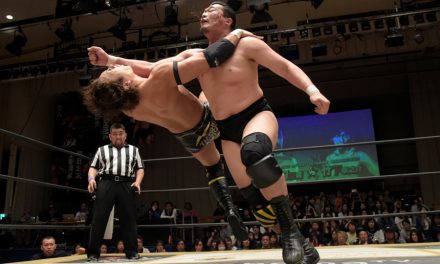