Single cam, thank you ma’am. New Japan Pro Wrestling continues on with Night 2 of G1 Climax 25 with a hard camera presentation from Shizuoka. Featuring no commentary and that one single camera, the event felt like an unwanted add-on. The Smackdown to Raw. The Thunder to Nitro. The Impact to Everything. While the results will play a part in the final G1 standings, you can almost be okay forgetting what happened here. Or at least, that’s what it felt like watching this show, all the way through, despite the surprise in the main event.

Komatsu acted as the competent one of the team in this tag team opener, with Jay White always getting advantaged by the veterans. In what would be a theme for much of the undercard, and maybe part of it was the presentation with the single camera making it feel like a glorified house show, it was really basic with few bright spots. The crowd was a bit reserved, coming alive when Liger locked White into a surfboard, then again when the two young lions had simultaneous submissions on the vets. The story was clear, Komatsu is ready for matches with the wisest of competitors, while White has a ways to go. It is Komatsu’s thirst that was evident here, as well, right from the get go. He’s ready. Big shock. Tiger Mask pinned White after a Liger Bomb to get the win in just over eight minutes. **1/2

The bright spot here: Kota Ibushi. Fantastic flying from the Night 1 main eventer made even Bad Luck Fale being in the ring tolerable. Not only that, but it eased my reservations going into tomorrow’s Gallows vs. Ibushi tournament match, as well as the eventual Ibushi vs. Fale match. Yeah, I’ll say it, I’m a bit hyped for it now, too! Other than Ibushi, there wasn’t much to gawk at, as the match went just shy of six minutes. It was for the best. Makabe pinned Cody Hall after the King Kong Knee Drop in a bout where sweat was nowhere to be found. **

When Yano wasn’t in the ring, we had action, albeit your basic fare. When Yano was in the ring, it was comedy. From being scared to wrestle Tonga, to never getting out his catchphrase, Yano couldn’t catch a break. Until the end, that is, when he schoolboyed Tonga up for the win. Going eight minutes, the match gives Yano momentum going into tomorrow’s battle with AJ Styles. Before this tournament began, I thought there was no way Yano could possibly defeat AJ. How silly of me for thinking this, of course, and even moreso after what was to come later. Surprises in this tournament happen. After all, Yano beat Tanahashi earlier this year in the New Japan Cup and Yano hasn’t ever let us hear the end of it. **1/4

Billed as a six man tag, this was effectively a regular tag match. Tetsuya Naito and Katsuyori Shibata did barely anything at all, with Shibata selling his injured arm and Naito continuing to be disinterested in wrestling. The main event of the non-main events, if you will, this six man tag was supposed to be the preparation for tomorrow’s big G1 matches between Tanahashi & Tenzan and Naito & Shibata. Somehow, though, by the end, it may have been more of a promotion for a Junior Heavyweight championship contender. This was the only one of the three undercard tags, featuring G1 contenders, where a G1 entrant didn’t get the pinfall. Nope, rather, it was Taguchi getting the win here over Mascara Dorada via the hip attack to set up a possible Jr Heavyweight title shot later on. I know, everyone is so amped (GFW, don’t send me any legal letters) to see Taguchi back in the title hunt. While not a great match, it was interesting. Dorada was fun everytime he was in. Naito, of course, was disinterested in competing. He casually strolled around ringside for a good portion of the match, sometimes acting like he’d get involved before backing away again. It was the best of the undercard, thanks to Tanahashi and Dorada. **3/4

Especially after their interactions in the Night 1 tag match, this was a highly anticipated matchup by many, and it kicked off our G1 action for today. Guess how it opened? Yep, a slugfest, great guess! So, one of the great things (of which they are not many) about these single camera shows with no commentary is the fact you can sometimes hear interesting crowd reactions. During this one, all I could hear was a kid sitting closeby continually screaming “Ishii!! Ishii!!!” It was one part adorable, and two parts adorable, with an extra part of adorable. The match, which was never not a slug fest, ended when Ishii stopped Kojima with a brainbuster for the pinfall. Afterwards, Ishii wiped his sweat off on Kojima, almost shading him for making him break a sweat in this opening tournament match. How dare Kojima put it to Ishii!? Ishii gets the first points awarded tonight, in what was likely a surprised to very few. This evened up their head to head record, as well, at 3-3. ***

One year ago today, Goto defeated Yujiro in the G1 Climax. He’d celebrate that anniversary by beating Yujiro again via Shouten kai, in even less of a surprise than the previous match. Before hand, if you were to tell me that Yujiro’s match would last as long as Okada vs Elgin, I would have feared that this match would go too long and not the Okada bout going too short. Well, both kind of happened. This one seemingly went on forever, and it may be due to my bias of feeling that Yujiro is completely useless. Like, completely. At least, in the ring. After seeing Tama Tonga earlier and Yujiro now, I can see why so many people were calling out that it should have been Tama in the G1 this year rather than Yujiro. We get what we get, though, and tonight we got Goto having to sell for Yujiro for a third of what was almost a sleep inducing match. **

This was painful to watch on screen. Not because of anything in the match, but because for the first minute the entrance lights were still on. On this single camera shoot, those lights created great glare and flare, making it nearly impossible to see what was happening in the ring. Once those lights turned off, though, the crowd turned on. When the G1 Climax intro video played for the live crowd before the first match of the night, the audience sat silently viewing it. Then, Tomoaki Honma was shown, and this crowd erupted. Well, erupted as much as this crowd was going to. They were excited to see Honma, excited to see a possible win, excited to see a 2015 Honma run… but they never got it. Instead, Yuji Nagata defeated Honma in a fun match that felt like the first important match of the night, really. After a backdrop driver failed to put Honma away, a second bridging driver did the trick as Nagata pinned Honma to gain 2 points. Like most Honma matches, it was his constant attempts at Kokeshis, and lack of focus, that drove away the win. ***1/4

Michael Elgin could have gotten the win here, it was possible going in. What better way to build intrigue in Elgin, and his future tournament matches, than to put him over the champion in a singles bout in the first match? Plus, we’ve seen G1 surprises before. Okada could have been on a high after winning the title that he wasn’t fully focused on this tournament. There were ways to do it. Not that I am advocating for it, it was just possible. Well, now, it is impossible, as Okada got the win with the Rainmaker in a really fun match. Elgin showed off his power, making him a force to be reckoned with in future tournament matches. A top rope falcon arrow couldn’t put Okada away, nor could a buckle bomb. Elgin tried everything, but it wasn’t enough to beat the champion. I’d recommend watching this match, especially if you’re an Elgin doubter. He belongs with these guys if he keeps putting on performances like this. ***3/4

Yep, you read that right. The first real surprise of the tournament happened in Nakamura’s first tournament match. Gedo has a weird fascination sometimes with Karl Anderson, but I never expected Nakamura to lose his first match to him. In a main event, no less.

Shizuoka was a weird crowd tonight. Maybe they always are, but we don’t get to see a lot of them on NJPWWorld in big events so it can be tough to tell. It was obvious the things they liked the best were Honma and Okada. Nakamura, you’d think, would be a big hit. Tonight, and I’m not sure why, they just didn’t get too into him. Or rather, they didn’t get into the match.

I can’t blame them. Anderson didn’t put on a main event performance, and this wasn’t the usual NJPW main event you’d see in a G1 tournament or other big show. I could have just as easily seen this match as the first bout after intermission, and I wouldn’t have been shocked at the placement.

In the end, Karl Anderson hit a stun gun on Nakamura to get the pinfall as kids everywhere in the building screamed for Nak to get up. He didn’t, and now it is a long road ahead to the potential Wrestle Kingdom main event. ***

That’s a wrap: I didn’t think we’d see a NJPW G1 show that could be described as completely skippable, but this may have been close. The Okada vs Elgin match is worthy of going out to see, but the rest was bland, and the presentation as a single camera shoot doesn’t help that notion. Luckily for us all, looking at future cards, I think we got the worst show of the tour out of the way early. 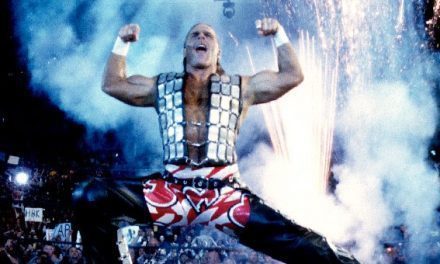