The last edition of Lucha Underground before Ultima Lucha can be summed up as such: Lots of medallions given out, Pentagon gets the answer he wants from Vampiro and Konnan is basically dead. Just your normal day in the park for Lucha Underground.

This week, we start off in Dario’s office with Big Ryck. He explains to Ryck that even though he hasn’t seen eye to eye with him, he gave him the big money for a reason and wants him out of Daivari’s shadow. Dario has one medallion left and plans to reveal the power of the medallions tonight and asks Ryck if money or power is more important. Ryck says why not both? Good answer big man. Dario gives him the medallion AND money. He looks back at Dario with his eyepatch and says “I’m glad we finally see eye to eye.” Get it? Damn it that was funny in such a dumb way.

Both of these guys are taken out of their respective feuds to have an opener here. Johnny comes out to an immense amount of heat, he’s killing it as a heel. This match absolutely rocked. This could have crawled into upper 3 star, early 4 star territory if it didn’t end abruptly via Crew interference. These two absolutely stiffed each other with hard shots and kicks and had awesome counters to each other’s moves. This was easily the best Texano performance I’ve seen and Mundo was the absolute perfect opponent for him due to the amount of heat he has and his obvious athletic ability. Very very good opener. ***1/2

Mundo and The Crew stomp out Texano after the fact and then El Patron comes in to clear out The Crew. Texano joins in on the ass whooping to clear the ring, but he and Alberto are left alone in the ring with some tension due to their very rocky history.

Hernandez is in Cueto’s office. Cueto cracks open a Miller Lite for Hernandez (Brother Dario clearly could use the sponsorship money) and informs him that Ultima Lucha will now be two weeks long, starting next episode! Hernandez/Drago will be on next week, but Dario says this isn’t just any match. He knows how much the fans hate Hernandez (who chimes in to say the feeling is mutual) so he will be letting the fans surround the ring with leather belts. That’s right, leather belts. This sicko is giving the fans the right to smack Drago and Hernandez with belts like evil lumberjacks if they leave the ring and Dario calls it “The Fans’ Backlash.” This could either be complete genius or completely terrible. Dario loves it when Hernandez tells him he’ll leave fans bloody if they try to hit him. What a lunatic.

Yes the rematch! This one has gotta be a lot more decisive after Mack getting the one up on Cage with a rollup in their first encounter. Well, clearly don’t listen to my logic because that’s EXACTLY how this one ended, in under a minute nonetheless. Mack got the fluky pin once again and Cage erupted on him post match. NR

A Sunset Flip and the match is over! The Mack 2, Cage 0! #LuchaUnderground pic.twitter.com/gqAQE9FO7Z

They brawled throughout the temple while security attempted to separate them as only security on wrestling shows can fail to do. Dario comes out to announce that Willie Mack and Cage will be in a falls count anywhere match for Ultima Lucha Week 1 next week since they want to kill each other so bad. More good stuff to add to Ultima Lucha; I kind of like this decision to make it two weeks which allows for more people on the program to blow off those final season ending feuds. Because god knows if we’ll even get a season 2 at this point. Dario now intends to tell us what these medallions all mean. Dario ends up revealing this god awful machination of a belt called The Gift Of The Gods which is an awful looking belt with a bunch of rectangles on it with slots for all seven medallions. Yikes. This is one of those things that had to sound/look better on paper. This thing is just abysmal looking in my opinion. Very mixed reaction from the crowd as well. Whoever holds this horrendous looking thing gets a Lucha Underground Championship match any time they want. But there’s a catch. There will be no “cash this in whenever you want” (SHOTS FIRED AT A CERTAIN SPORTS ENTERTAINMENT ENTITY) you must run it by Dario to get your match a week in advance. Dario is the embodiment of any shady promoter. He also says that if you are to wait too long with the Gift OfThe Gods, then you must defend it against other competitors. Once the belt is used to gain a title match, the medallions are reset and must be regained by other people once again. This is a really neat concept.

Dario goes on to say that at Ultima Lucha, the belt will be decided in a seven way match with all the holders of the medallions and calls all the holders out to the ring. Jack Evans, Aerostar, King Cuerno, Bengala, Sexy Star, and Big Ryck (Who obtained one by doing nothing but talking to Dario Cueto earlier tonight) make their way to the ring and all put their medallions in the belt to claim their spot. There’s just one issue. We need #7. Fenix won the first medallion but Mil Muertes destroyed him so Dario will be having a battle royal for the last medallion. In the battle royal, once it’s down to the final two competitors you must win by pin or submission. So appropriately, out comes Fenix back from the dead to a huge ovation. Dario places Fenix in the battle royal to win back what is rightfully his.

Battle Royal for the 7th Medallion

Competitors in this are Fenix obviously, Killshot, Argenis, Daivari, Vinny Massaro, Mascarita Sagrada, Famous B, Super Fly, Marty The Moth, and Ricky Mandel. Famous B did a superkick to Mandel, a crotch chop to Argenis followed by a Pedigree and a big leg drop. What a mark. Hilarious moment as Mascarita monkey flipped SuperFly off the apron and eliminated himself as well in the process. Famous B had a really solid showing in the battle royal portion of this (besides the cringeworthy WWE moves early on) and lasted to the final 4. Marty the Moth gets the huge opportunity once again as he is in the final 2 with Fenix and we start up the actual match part of this. Marty pulls something brilliant as he teased an outside dive but feigned it only to flip the crowd the bird. Fenix on the other hand was more than happy to hit Marty with a tope of his own. Back in the ring, Marty appeared to go for the tilt a whirl back breaker, but Fenix turned it into a small package pin of sorts to get the shifty win over Marty. Fenix is going to Ultima Lucha. **1/4

We now get to hear… from known mute Prince Puma!? First, though, we get the run down of the card for Ultima Lucha:

Puma is introduced by Melissa Santos. He gets ready to speak but here comes Mil Muertes in a suit with Catrina in tow. Mil is somehow even more frightening in a business suit. Guess we don’t get to hear Puma after all as he puts the mic down and takes his jacket off. The Disciples jump Puma before anything can go down. Puma cleared them out and hit a tope to outside to dispatch the Disciples. Mil hits the ring and the fight is on. Puma just lays into Mil and actually hits the 630, but stares down Catrina before doing so in an awesome moment. This was a great babyface response to what happened to him and Konnan last week.

Final Thoughts: Another very good episode of LU, and we have finally arrived at Ultima Lucha, now a week earlier than expected! The card as I posted earlier looks top and down really exciting and they made a wise decision to spread this out to over two weeks. Texano/Mundo was a shockingly fun and quality opening contest that set the mood for this episode. The leather strap fan lumberjack match is yet another zany idea this show has created and hell, even if it sucks it’s a really neat outside the box idea. Gift of the Gods is an awesome concept carried out by a just as terrible looking title belt. Who knows if we’ll ever get to see the true potential of it besides this one match seeing as the show has a very murky future going forth. Having Fenix win the medallion back in the main event starts his road to redemption and it was the right move to make. This was a well done episode that set what needed to be set for Ultima Lucha in a prompt and calculated manner. 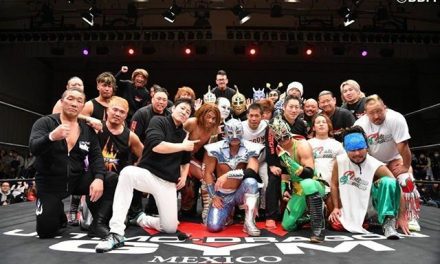 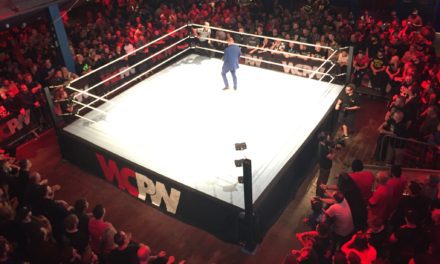