Hope you had a chance to enjoy Rich Kraetsch and myself periscoping throughout the evening during WWE Battleground. You can still see the archives. Hit my Twitter @spiffie6123 for the various links. The merits of shower sex vs. hot tub sex were discussed.

This week there were some shoot life things that forced me into having a very limited window of time to deal with RAW. So the experiment this week is that I watched the show totally live. Other than what I was writing when the show went off the air this is live to tape, cameras running during the commercial breaks, and when Tough Enough came on the air, I closed everything down for the night. To that end, I’m thinking of doing a recurring post on the Voices of Wrestling forums each weekend to serve as a longer-form lead-in to Raw. I know this week is pretty bare bones, and I hope to make it up to those of you who are kind enough to read every week. So if there’s anything, literally ANYTHING you would like to see next week, or on the forums, or on Periscope, or Twitter, let me know.

This week I’m as live as RAW itself!

Opening recap of the Undertaker stuff didn’t really tip their hand as to how they’re going to spin this. Crowd of course popped huge at the gong to open the show. Byron Saxton really hammers home how old Taker is by talking about watching him as a kid.

Please let the “raging inferno” reference be a sign that they will be fighting in a fire match.

So the reason for the feud is Undertaker, the undead monster, has hurt feelings. A sad Undertaker sneak attacks Brock and saves Seth Rollins. HHH is smiling and happy about all of this. I feel the swerve coming around the bend. This is all way too simple so far.

Ric Flair is overjoyed at Charlotte’s success. The better she does, the more cash Ric can hit her up for.

I like the way that they’re justifying the Naomi/Sasha group being off on their own. Why would they want to be Paige’s second banana? Or be victims of the Bella clique? This is about as close to normal human motivation as we’re likely to see in WWE characters, so let’s appreciate it.

Oh Charlotte, that was not pretty looking. She hung in mid air seemingly, just waiting for the Bellas to move before she flung herself to the floor.

I hope next week we actually get to see Becky Lynch wrestle on RAW. Preferably vs. Sasha.

Oh god, even the ref seems to be messing things up. This is a bit cringey.

And of course jealousy about Total Divas begins to be brought up by the announcers. They just can’t help themselves can they?

Titus O’Neil is the best wrestler in the world right now. I want him versus 20 guys and they just keep jumping on him and he keeps throwing them away and then lines them all up and super shoulderblocks the first in line. The last guy goes flying into orbit and waves at New Horizons as he speeds off towards Alpha Centauri. The guy in the front is hit so hard his atoms begin to split and he has ends up with total existence failure.

There have been a LOT of apron spots in the last 24 hours.

Paul Heyman’s here! They told him not to be here! HHH and Steph are as dismayed by this as Moss finding Richmond is out of his room.

I really would love to listen in on R-Truth, Cesaro and Heath Slater’s conversation. I hope they make towns together.

I guess it doesn’t take much to turn Lesnar heel. A crazy death machine who likes to bully everyone around him. Seems like that’s where Heyman is going.

God bless the one single security guy who was trying to hold Lesnar back. That’s a man with a very strong sense of belief in himself.

Curtis Axel has a bit of “Wild” Bill Irwin happening these days.

Undertaker best watch himself around Titus. He will murder that old dead ass.

Notice that Brock Lesnar is the problem in the eyes of the Authority.

And now after the break Brock is getting zip tied by the “cops.” But Undertaker is the face in this feud so far. SummerSlam is going to be a 392 car pile up of clusterfuckery. Can we get Goldberg as special ref? Winner: Titus O’Neil for not losing his temper and murdering the Undertaker.

Seth Rollins, the afterthought. It’s not his fault. He’s playing the role he’s been given as well as it can possibly be played. This is the first time that they’ve really acknowledged that Seth Rollins, part of the Authority, was the person saved by the Undertaker appearing last night.

We may no longer be acknowledging that Erick Rowan is a master vintner and classical guitar virtuoso, but I feel like someone has to point out Luke Harper’s deft touch with arts and crafts. Look at what he did with that shirt. The darts are such a great effect. I want Harper to open up a small shop in a vacation town, the type where there’s lots of B&Bs and people walk around in the summer looking at art they won’t buy. And in that town Harper would sell handmade clothing. He would do custom work at your request, but there would be plenty of already made pieces for purchase. And the local kids would take about that crazy Mr. Harper who likes to make scary faces at them before giving them fruit pops to help cool them down from the summer heat. He would have a flirtation with the woman who runs the olive oil and vinegar shop two doors down. It would be a lovely thing, Harper’s Handmades.

This crowd is being far nicer to Roman than St. Louis was. It wasn’t even that they liked Wyatt that much, but they were just plain salty towards Roman.

Poor Byron. He looked so forlorn standing there.

Tomorrow on Uproxx: “Luke Harper using the Anaconda Vice as a dig at C.M. Punk?”

Biggest pop of the match was Ambrose running over to help Roman. After all the jobbing and crap they’ve done with Dean he’s still over and the crowds would still buy him as champ.

The Shield vs. Wyatts tag match is a lesser version of those amazing six man matches, but it still just has an electricity to it when those four are fighting at once. Yet at the same time I feel sad. Winner: Erick Rowan. His lot can only improve when he returns one day if the Wyatt Family is a thing again.

Seth Rollins Told You So

So Rollins is the guy reminding everyone how much they hate him and all the awesome things Lesnar did to him. But Lesnar is the guy getting arrested for attacking the Undertaker when Undertaker was getting set to murder his one friend in the world. After the Undertaker interfered because he had a case of broken feels so he cost Lesnar a chance to win the title from the hated Seth Rollins. I really want to believe this whole thing is leading somewhere amazing, where all the threads will come together like it was Survivor Series 98.

I agree with Seth. I am a stickler for a decision to be official. Can’t blame him for wanting to have that said in front of the OH FUCK ME WITH A RUSTY SPOON THIS IS THE WORST THING IN THE WORLD.

I’m going to tell you right now, I won’t be able to keep watching through a John Cena WWE World title reign. I just can’t do it. Maybe they’ll let me take a hiatus from writing about this show.

I do not like any of this. This is just pure WWE. Book a new guy as a weak champ, then let John Cena make fun of him for being a weak champ. Because god forbid John Cena not be the bestest guy in the world.

This either leads to John Cena beating Seth Rollins, or it comes to nothing and it was just a case of John Cena getting to make Rollins look like shit. His reign of terror continues.

BTW, I’m serious. Cena wins the WWE title, I’m out. Loser: My will to live

I’m confused. We already had our divas match for the night. Why are there women on screen again? Is there a gravy bowl involved?

All jokes aside, there are few things that are more useful to the idea of women being presented on screen than presenting them wrestling as another match on the show. Rather than “the women’s match” that fills the 6 minutes or so and then they disappear in a cloud of makeup.

Can anyone confirm if the NXT ring is the same size as the WWE ring?

This match really would be improved without the Bellas out there. Not because of “oh stupid Bellas” or something, but this match really calls out for commentary focused on the match, rather than the role of the Bellas in this whole story. Sasha and Becky need to be the focus right now. Nikki Bella is actually doing a good job of pushing the story forward on commentary despite the tenuous balance between kayfabe and in-universe angle. But they need to give us more reason to care about these new wrestlers than “Becky Lynch has red hair and Sasha is black and sassy and trust us they matter.”

Golden Girls reference has to be a tip of the hat to Sara Del Rey, noted Golden Girls enthusiast.

A crowd not at Full Sail or full of Bullet Club shirts just got excited for a hot tag in a women’s match after ten minutes. We live in strange times.

Absolutely right ending. Paige has a reputation for being talented and skilled. To see her tap clean gives Sasha and her finisher instant credibility. Winners: Sasha Banks and Naomi

How anachronistic does this Lana and Summer Rae shit feel right now? It seems like a rib to put these segments back to back.

Cesaro’s continued nods to Tyson Kidd are just the best.

I didn’t know how much I needed white meat babyface Cesaro in my life until now. And now that I’ve seen it I need ever so much more of it.

We return to a Sheamus chinlock as Michael Cole tells us that this is Raw #1,056. Approximately 439 of those episodes have been comprised of chinlocks.

If only Cesaro could connect with the fans. Then he might get over one day.

I love the fact that absolutely everyone ends up hating Kevin Owens. There should be some people that even the other heels can’t stand, or a face that no one else really likes.

Rusev is now an abandoned power suit fetishist who is only good for generating poetry prompts. His lot in life is to take finishers and look sad and defeated.

I so love babyface Cesaro. He was so the best part of this match. The crowd was absolutely bonkers for him. I hope this is the start of a Daniel Bryan-like rise to the top based on just being so awesome in the ring that the crowd adopts him and demands big things for him. Winners: Cesaro/Randy Orton/John Cena

That’s all folks. Let me know if you prefer the quicker, to the point, live coverage without all the frills. 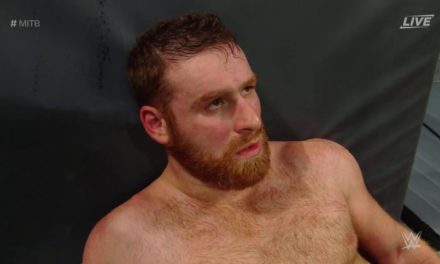