The podcast week in review, brought to you by Game of War (or our Amazon and WWE affiliate links).

Talk n’ Shop #54 (7/11/15): A continuation from last week, with Tama Tonga and Mikey Nichols ostensibly on the show, but the bulk of the broadcast if built around Doc using Periscope (and getting trolled by Trent Berretta in the process) and the gang coming up with the Talk n’ Shop drinking game, which amazingly results in no one’s demise. Don’t try this at home. THUMBS UP

MLW Radio #188 (7/12/15): A minimum of nonsense this week, outside of some quick basketball and movie talk. Court, Konnan, and MSL discuss a ton of wrestling, including Vince McMahon back in Muscle & Fitness, a theory about WWE running John Cena into the ground, the Rusev/Ziggler mess, finding and building talent, and a lot more. Plus, two scoops: Konnan flat out says Lucha Underground will be back for season 2, and the gang reveals TNA might end up on WGN thanks to Billy Corgan (but Court takes credit for the Destination America cancellation story? Really?). THUMBS UP

Piper’s Pit #64 (7/13/15): Lanny Poffo is the guest this week to discuss his brother going into the WWE Hall of Fame, a timely topic. They discuss Lanny’s heartfelt decision to go against his brother’s wishes and how Roddy Piper was indirectly responsible for the whole thing. Lanny and Piper go way back and are clearly having a lot of fun swapping old war stories. Earl is terrible on the show, but he mostly stays out of the way. The subject matter isn’t the most timely, but Lanny is always a fun, self-deprecating guest, and this is one of Piper’s better shows. Piper also addresses the Austin situation, clarifying that it was his choice to leave Podcast One after the whole kerfuffle went down. THUMBS UP

Steve Austin Show #235 (7/14/15): Steve talks to Rob Croxall, the owner and founder of El Segundo Brewing Company. They talk about brewing beer, beer brewing classes, and how to brew your own beer at home. There’s a lot about brewing beer, is what I’m saying. I’m sure some people will be really into this subject but by the end this started sounding like Charlie Brown’s teacher to me. THUMBS DOWN

The Ross Report #74 (7/14/15): Ross chats with ROH star Michael Elgin (or “Mike” as JR repeatedly calls him). They discuss Elgin starting wrestling at 14, the story behind his baseball tryout, the growth of Ring of Honor, Elgin’s training school, working with New Japan, Moose, the G1 tournament, and more. Unfortunately, JR just has to continually hammer home his “everyone has to slow down and sell” spiel, and gets on Ring of Honor for the lights again, even though Kevin Kelly explained why it’s a challenge. Elgin is a decent enough guest, but as always Ross just gets in the way of his own show. <Elgin’s interview starts at 14:57> THUMBS IN THE MIDDLE

WOOOOO ™Nation #11 (7/15/15) Ric and Conrad talks to former Horsemen manager JJ Dillon. They talk about Flair wrestling Charlie Cook for an hour, JJ’s life as a prison guard (Ric is a big fan of prison shows), working with Dusty, drunken shenanigans, the downsides of getting married, the differences in working for WCW and WWE, and a lot more. JJ and Ric have some great stories, which is no surprise, and the only downside is Ric seems to be eating on air for a good chunk of the episode. THUMBS UP

Talk is Jericho #160 (7/15/15): Jericho talks to Randy Blythe of Lamb of God about his new book about the 37 days he spent in a Czech prison for manslaughter charges stemming from an incident at a concert. They get into surprisingly deep detail (so much so I don’t feel the need to read his book) about prison (with a really gross story about the shower), his cellmates, guards, his trial, and more. I could have sworn Blythe was a repeat guest, but he was actually on Taz’s show back in May recounting the same story. Here, he goes into much more detail and this is a really riveting show. <Blythe’s interview starts at 18:09> THUMBS UP

Human Podcast Machine #32 (7/15/15): Another fantasy draft addition, this time of the top 10 strongest wrestlers. Again, the parameters are a little loose (Tenay relies a lot on stats and Taz gives him hell for it) and there is a decent amount of overlap, but also some great discussion. And any podcast that features extended discussions on Nick Busick, the Warlord, and Ted Arcidi is A-OK in my book. Plus everyone dumps on each other in the usual grandiose fashion. THUMBS UP & BEST OF THE WEEK

Bauer & Pollock (7/15/15): Bauer & Pollock offer their last show for a while, given the crazy schedule over the next few weeks. They spend the first chunk of the show previewing the G1, then head on to Wrestler of the Year talk, Battleground, the NXT women’s invasion and the presentation of women in WWE, Tough Enough, the history of developmental, TNA’s marathon taping schedule, the stability of Ring of Honor, chord cutting and its effect on wrestling, and new streaming services from Samurai TV & the NWA. The usual good roundup, but an extended discussion about Ninja Turtles and how they can help TNA indicates a break is a good idea. THUMBS UP

Art of Wrestling #259 (7/16/15): A live outing from Providence after a Beyond Wrestling show. First up is Nick Gage (talking prison and saying “man” about 10,000 times), Rich Palladino (Beyond Wrestling ring announcer, talking ring announcing the Mass Transit show), Team Tremendous (the Team Tremendous gimmick), Steve “The Turtle” Weiner (winning a trophy), and Joey Ryan (working with Chavo Guerrero Sr. on a video shoot). The Turtle segment is really bad and should be avoided at all costs; the rest is a fine listen. THUMBS IN THE MIDDLE

Steve Austin – Unleashed #238 (7/16/15): John Morrison/Johnny Mundo drops by 316 Gimmick Street to talk about being a geology major, acting classes, Lucha Underground, speaking Spanish, the All Night Long match with Prince Puma, psychology, Tough Enough, OVW, throwing Alberto El Patron through a window, leaving the WWE and the possibility for a return, the movie he wrote, and working out. Not a lot about his time in the WWE (outside of a funny story about Mundo not believing Stone Cold was actually calling him), but the interview really covers everything else you would want to hear from him. THUMBS UP

The Jim Cornette Experience #85 (7/16/15): Another lengthy intro sees Jim and Alice talk about Donald Trump, Scott Walker, and a health update on Kenny Bolin (with a hefty audio segment from this week’s Drive-Thru show). After that, Jim Ross joins the show to discuss the upcoming Legends Fanfest and the Mid-Atlantic documentary, and thankfully no current wrestling is discussed. I wasn’t looking forward to this one at all, but it’s not a bad interview. <Ross’ interview starts at 33:36> THUMBS IN THE MIDDLE

Talk is Jericho #161 (7/17/15): Ian Ziering is the guest this week. The first half of the show talks Sharknado 3 and how Ziering found his way into the franchise. They seem to really overinflate the cultural significance of the Sharknado franchise (plus Ziering says if everyone who watched it on TV went to see it in theaters, it would have a 70 million dollar opening weekend, which is laughable). The back half, which delves into 90210, Aaron Spelling, and being on a smash TV show, is much better. Jericho’s audio also sounds lousy for some reason. <Ziering’s interview starts at 15:14> THUMBS IN THE MIDDLE 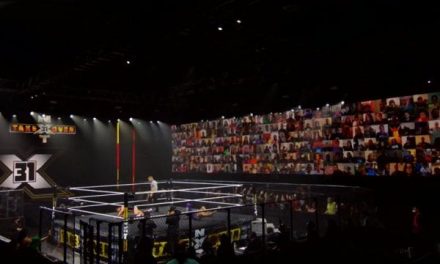