The 2014 G1 Climax continues on AXS-TV with three matches from the July 28, 2014 event in Sendai. Our full review can be found here and with three matches given over four-stars it is a safe statement to say that you should find a way to catch this entire show. Again, clips and edits don’t do justice to many matches featured this summer on AXS-TV and the Shinsuke Nakamura vs. Tomoaki Honma match is one that deserves to be seen in full. Truth be told, I felt that match was better than tonight’s main event: Tetsuya Naito vs. Kazuchika Okada. Oh well…I guess we all will just have to settle. Yes, that was sarcasm. That aside, the big news was that Frank Shamrock would be making his New Japan broadcasting debut filling in for Josh Barnett. Would Shamrock be able to keep up with the ever-amped Mauro Ranallo? Let’s find out, shall we?

As with all of these G1 AXS-TV shows, the opening two matches are all clipped and tonight it was the Tanahashi vs. Fale match that got a major chopping. Around five minutes of the thirteen minute match aired and it was a good way for Frank Shamrock to get comfortable behind the microphone calling professional wrestling. For his first time calling NJPW, it was a passing grade, but not without plenty of room for improvement.

Shamrock sounded as if he was a bit cautious diving into the pool and kept most of his commentary quite simple. Nothing he added was particularly ground breaking and when he did add a comment it was kept at a sentence or two with little for Ranallo to play off of. I thought that was a bit strange given that Shamrock had worked with Ranallo before, but either opening night jitters or the fact that Shamrock wasn’t familiar with the product held him back. Frank kept it simple and didn’t venture too far away from Ranallo’s lead. Again, nothing said was shocking and he certainly didn’t bomb, but there was nothing that particularly stood out.

The highlight was Mauro Ranallo, who went right for the throat as he dropped his first obscure wrestling reference ten seconds into the match. This, I am certain, is a personal best for Mauro and possibly a broadcasting record.

“The Strikeforce tag team is back…and no not former WWF Tag Team Champions Tito Santana and Rick Martel. It is combat sports legend Frank Shamrock filling in for Josh Barnett and I am Mauro Ranallo.”

After Fale picked up his win, the cameras found Hiroshi Tanahashi spread out on the locker room floor trying to collect his thoughts. He might be the best in the business giving these exhausting and spent post match interviews, but tonight he had little to say.

“My luck has changed.”

Back from the commercial break and our second clipped match is quite a good one : Shinsuke Nakamura vs. Tomoaki Honma. In fact, for a clipped match they aired enough to give it two television segments. Unfortunately, Frank Shamrock struggled on color commentary before they even locked-up as he missed the mark on Honma’s wrestling experience.

“Nakamura is really selling his experience and knowing what this ring is about.”

One, not to be nit-picky, but Honma has been around for over 15 years. It’s not like “experience” is an advantage for either guy. Two, I am not really sure what Shamrock is trying to sell us here. What exactly does “knowing what this ring is about” mean? Look, I understand it is a throwaway line but with this segment Frank was having me yearn for Josh Barnett to make his return. From his laughing on commentary to his calling of the obvious, it really sounded like Shamrock was put in an awkward situation. The only comparison I can make is when you get word that you have to give a presentation at school or work and you lost all of your notes. You kind of know what you are talking about but you’re just trying to bullshit your way out of it and power through it. That was the feeling I got during most of Shamrock’s commentary.

The good news was that Ranallo was on fire doing the heavy lifting on play-by-play and helped Honma become the ultimate underdog. Near falls were celebrated and Mauro shined during the closing stages of the match almost begging Honma to pull out a win. Of course, Honma doesn’t but Ranallo won’t allow you to give up hope. For new viewers, this had to be a treat because even I, having seen this match a year ago, still got some goosebumps as the match came to an end. That’s the Announcer of the Year for you.

After the match, Nakamura held court in the post-match presser.

“This is G1. You guys hear me? Even if you are in the best condition, you never know what is waiting at the match. How many did I win after losing my first (match)? You know what? I think I am on a roll.”

While Nakamura claimed his winning streak, it was Honma who stole the award for best interview of the night.

Tetsuya Naito was up next, in studio, as he gave his thoughts on taking on Okada in tonight’s main event.

“I think it was my fifth G1 Climax. I didn’t feel the pressure as the former champion. It felt like a whole new start. I was off to a relaxed start. A.J Styles and Kazuchika Okada were the wrestlers who caught my attention. Many expected it would be Styles or Okada who’d got to the final round from our block. I was irritated to hear that so I felt I must defeat them. That’s why those two wrestlers came to mind. “

Naitio, in an interesting note, gave his feelings on returning to the Sendai Sun Plaza Hall – the location where, in 2012 vs. CMLL’s Rush, he suffered a leg injury that put him on the shelf for a considerable amount of time.

“When I think of Sendai Sun Plaza Hall I think of the 2012 G1 Climax match with Rush. I remember clearly that moment I tore my ligament. That’s basically all that comes into mind. It was a bitter memory so I don’t really like that venue…but in a way that’s how memorable the place is for me. My knee ligament is damaged, so I just have to accept that. Sendai Sun Plaza Hall is a venue I won’t easily forget.”

In the early stages of the match, Ranallo set the table giving the history of Okada and Naitio in the G1 and Shamrock did a solid job adding safe and simple color commentary. He did help explain holds and submissions, again with not too much detail, and added more “fighting perspective” when the time called for it. You could hear him falling back on his MMA broadcasting experience and this was a safety zone he could settle into.

While not one of the greatest G1 matches of all time it certainly was a strong way to finish the show. On paper this match had blow-away potential and I do remember feeling a little short-changed upon watching live for the first time. This contest had match-of-the-year predictions, but I can’t help but feel something was missing and that opinion is strengthened upon watching the match again tonight. It is in no way a bad match – in fact it is very, very good. It is was just missing that extra spark that, unfortunately, Ranallo couldn’t help ignite into a must-see five-star  match. Very good but not great.

After the match, Okada addressed the media in his post-match presser.

“I said I’d win every single match but I am such a loser. Laugh if you want but let me say this. I’ll win all the remaining matches.”

Gedo stepped in to give Okada a little pep talk and to set the record straight with Naito.

“After Rainmaker rules G1, I’ll slowly take care of you. Did you get that? I said slowly. I’ll take my time with you, bastard!”

From there it was Naito, in ring, as he let his feelings known in front of the Sendai crowd.

“Here in Sendai I’ve had a few bad memories in the past…but no matter what you all in Sendai have always been welcoming. Thank you. Thanks for cheering me on today. G1 Climax is not over yet but with my victory today, I alone stand at the top of Block B. This summer I am the main man!”

Looking back, Naito closes the show in studio to give the final word on his match with Kazuchika Okada.

“This was a match in Sendai against Kazuchika Okada. For me this was an important match. I defeated Kazuchika Okada and I told the audience everything I wanted to. I showed those who expected A.J. or Okada to win. I showed them I’m still here. Also, the Sendai audience gave me lots of support. It’s become one of the most memorable matches.”

Final Thoughts: Overall, this was a solid hour of wrestling but not in the upper echelon of AXS-TV broadcasts. Frank Shamrock played it safe and did a decent job filling in for Josh Barnett, Mauro Ranallo continued to deliver his best-in-the-business commentary, and every match was at least good or very good. Should you watch the show? Yes. Is it one of the better shows this season? I’d place it somewhere safely in the middle of the pack. Again, nothing was bad but it lacked the extra juice to put it at the top of my list of the best shows of the year. These are the dangers of having a high bar set for yourself. Sometimes very, very, good just isn’t enough to put you at the top. It is a tough problem to have, isn’t it? 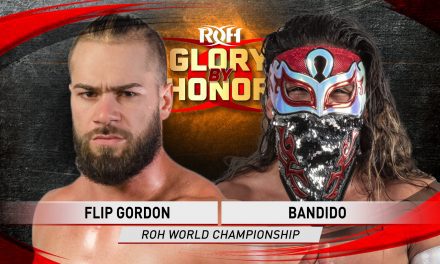 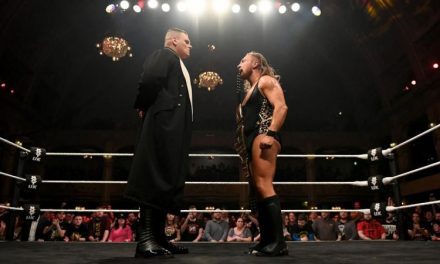