If I was a cleverer man, I would take the title of this article even further and do a full-on parody of John Sebastian’s theme to the 1970s sitcom Welcome Back, Kotter. But since Sean Flynn pretty much stole everyone’s damn thunder in his July 6 WWE Monday Night RAW review (something he does brilliantly every week, I might add) with the collection of poems based on Rusev’s “Don’t waste your precious words hot summer” line, I’ll just let it go.

But the title still rings true: Kazuchika Okada has returned to the top of the New Japan Pro Wrestling mountain after defeating A.J. Styles at last weekend’s NJPW Dominion to win the IWGP Heavyweight Championship.

A dominant Okada is no strange sight to the average New Japan fan. Since February 2012, Okada has held the IWGP Heavyweight Championship three times, won the G1 Climax twice (2012 and 2014), and won the 2013 New Japan Cup. Okada has attained more accolades in three years than many wrestlers attain in their entire careers. Okada as IWGP Champion has become such a natural fit that it is amazing to think that just a short time ago, he was Samoa Joe’s lackie in TNA.

In order for Okada to regain the gold, however, he had to lose it in the first place. Indeed it was A.J. Styles who defeated Okada at Wrestling Dontaku 2014 to end Okada’s second heavyweight title reign and bring the belt to the Bullet Club.

This was the beginning of a year-long angle for Okada that is a very common plotline in storytelling: the redemption arc. The hero is struck down by an antagonistic force, sent to his lowest point, and must then undergo an arduous journey to defeat said antagonistic force and return to where he once was.

Sending the hero to his lowest point is such a handy plot device because it makes the hero’s eventual return and victory much more emotionally satisfying for the audience. The toil and drama of the hero being driven down into the gutter allows for the subsequent feeling of joy and triumph when the hero emerges victorious at the end of the story. This is opposed to if the hero always came out on top and was always dominant, which would make the story seem very stale and boring. The intense conflict of the fall and climb gives way to an intense catharsis.

Okada’s redemption arc was interesting in that his lowest point occurred somewhere in the middle. I find that single story redemption arcs have this point near the beginning, but not with Okada. He was knocked off his perch, no doubt. The man lost his IWGP Championship to Styles via Bullet Club shenanigans and then failed to win it back in a rematch a month later at Back to the Yokohama Arena due to the same reason. It was a heavy blow, but Okada was not at his lowest. Not yet.

Hell, it looked like those two back-to-back losses were going to be the lowest point when Okada won the 2014 G1 Climax. Okada defeated fellow CHAOS stablemate Shinsuke Nakamura in the finals to earn an IWGP Heavyweight Championship title shot at Wrestle Kingdom 9. After the match, he made an impassioned statement, saying that New Japan was his company, the IWGP title was his title, and he would become champion once again. And when Hiroshi Tanahashi beat Styles for the belt at King of Pro-Wrestling in October, it looked like Okada’s redemption arc would come to a close on January 4. He would finally beat Tanahashi at the Tokyo Dome (something he had tried once before, but failed), win back his championship, and reign supreme once again.

Except something else happened: Okada hit his lowest point.

At Wrestle Kingdom, Tanahashi soundly defeated Okada to retain the title. Even Okada’s patented Rainmaker lariat couldn’t help the man as he fell to the “Once in a Century Talent.”

Okada made his way to the back, tears streaming down his face. He had failed again. All that bravado after the G1 finals about being the guy in New Japan and winning back his title at the Dome came up to absolutely nothing in the end. Making things even worse was the fact that the next night at New Year’s Dash, Bad Luck Fale pinned Okada in the center of the ring. The proud “Rainmaker” had become a broken shell of his cocky former self. He was at his lowest.

Still, you have to hit rock bottom if you want to build yourself back up. Redemption was Okada’s ultimate goal; every one of his fans knew that as well. Okada needed to get back on top, he needed to make good on his claims, and he needed to win his IWGP Heavyweight Championship back.

After losing once more to Fale during the New Japan Cup in March, it soon became clear that Okada’s biggest hurdle would be overcoming the 6’4”, 320 lb. Tongan colossus of the Bullet Club. Invasion Attack 2015 would be Okada’s chance to take down the giant. Despite being severely outweighed, Okada finally managed to defeat Fale. The defining moment, though, was after the match. Okada stood tall with one foot firmly placed on Fale’s fallen body, like a triumphant hunter who had just bagged his prize. He was well on his way to reaching glory.

Storytelling logic might dictate that Okada would need to overcome a few more obstacles before finally challenging A.J. Styles (who had won the belt back from Tanahashi earlier in the year) for the IWGP Championship; perhaps taking out some other Bullet Club members, or winning a number one contenders match against another New Japan wrestler. But Okada did not feel like waiting. After Styles defeated Kota Ibushi to retain the IWGP title in the main event of Invasion Attack, Okada blindsided Styles with a Rainmaker, laying him out and making one more statement: He was coming for A.J.’s belt sooner rather than later.

So the match was set: July 5, 2015 at Dominion. A.J. Styles vs. Kazuchika Okada one more time for the IWGP Heavyweight Championship. It was an incredible gamble on Okada’s part; he was quite possibly putting his entire legacy on the line. If Okada lost to Styles for a third time, could he ever win his belt back? Was he really the “Ace of the New Era?” Or was he just a three-year flash-in-the-pan, a guy who couldn’t accept the fact that his time at the top was over and someone else had taken his place? Okada had to win. He had to win.

He won. 26 minutes and 16 seconds of an amazing match ended with Okada turning Styles inside out with the Rainmaker and becoming IWGP Heavyweight Champion for the third time. In six months Kazuchika Okada went from a blubbering mess to a conquering warrior, firmly reestablished in his position as the absolute best that New Japan Pro Wrestling had to offer.

And as great as Okada probably felt that night, I as a fan felt even greater. It was so elating to see Okada finally beat Styles for the belt and redeem himself for the past year’s missteps. That beautiful gold belt around his waist just looks right. Because he was without it for so long, it made me enjoy it so much more when he won it back.

So good on you, Kazuchika Okada. You’ve made it to the top of the mountain once again. The only thing left to do now is sit back, relax… and wait for your first challenger to arise. 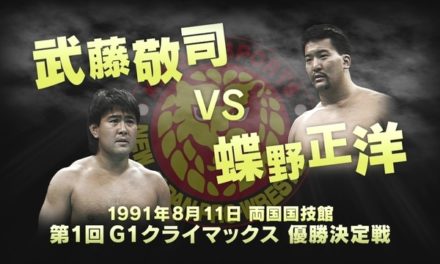