Last week’s show, was not my cup of tea, meaning they can only go up. Here’s hoping this episode is a good bounce back from a dull outing, especially since we are on the closing stretch to this season, with Ultima Lucha airing August 5.

We start with Pentagon Jr. in his Master’s shrine or whatever. He’s kneeling down telling the Master that he wants to sacrifice Vampiro in the ring so bad at Ultima Lucha. Note how well this scene is filmed, with smoke rising up around Pentagon in this dark chamber with the Master being a shadowy figure with an even shadowier voice. Master tells Pentagon not to waste his time with this and look for someone else to sacrifice. Pentagon is too far gone at this point though and demands that he sacrifice IAN HODGKINSON. This brother is using shoot names now! So awesome.

Ah yes, we finally get this match. Felt like this should have happened way sooner when Cage literally shoved Mack out of his trios team spot with Daivari and Ryck.  Thus is the issue when you have so many storylines to cover with only one hour of television. They start beating the tar out of each other immediately, obviously no love loss. I actually typed that and Striker said it right after I typed it which just freaked me out. Please God don’t tell me I share a brain with Matthew Striker.

A fine short opener which highlighted the absolute incredible athletic ability and agility of these very big men. Mack kicking out of the discus lariat was shocking and got a big pop out of me. Mack was able to get the win with a quick rollup, which seemed like a weird finish but it also keeps this feud going with a not so decisive win. Give me more of this! ***

On a scale of 1 – 10 on the richter scale, how would you rate this match? #LuchaUnderground pic.twitter.com/xiwPaslQAu

Catrina’s back. And this time her target is Son of Havoc. She has a message: The Disciples of Death will be after the Trios titles, but tonight death will be coming for him in the form of Mil “F’ing” Muertes. Ivelisse comes into the picture to tell Catrina to back off. She went to hit Catrina and Catrina did her supernatural teleport business and of course Ivelisse ends up on top of Son of Havoc. Angelico walking in to say in the most deadpan way possible, “Please don’t tell me YOU two are getting back together.” This was in “so bad it was great” territory.

Next we have Vampiro’s sit down interview with none other than…Pentagon Jr. Vamp apologizes to the audience and Pentagon for getting involved in  his business when his time has come and gone. But next he asks Pentagon who his master his, Pentagon does not answer. Vampiro asks why Pentagon is so violent; Pentagon says that he believes Vampiro and him were very much alike in that Vamp used to enjoy the pain of others, but now he’s simply a coward. Vampiro absolutely snaps and threatens violence on Pentagon right in the interview and describes that he’s a different family man now. Pentagon challenges Vampiro at Ultima Lucha; Vampiro ducks it and Pentagon is threatening to expose Vampiro for who he really is. There are many interesting subtle hints dropped here about their relationship. This segment was one of the better on screen segments you’ll see on televised wrestling this year due to its realness and intensity.

Mil Muertes vs. Son of Havoc

Notably, Angelico and Ivelisse are actually out here in support of Havoc! They’ve come a long way in their relationship of disarray. This started off very similar to the Mil/Drago match where Mil just tossed Havoc around into the chairs and outside environment. Oddly enough, Havoc got more offense in than Fenix’s last attempt and Drago against Muertes. That’s a little odd but I enjoy Havoc and it was a good underdog hope story.

Havoc was one missed Shooting Star Press away from pulling the upset. On the outside, Catrina tried putting Angelico under her control, and Ivelisse interrupted. Catrina summoned the Disciples to gang attack Angelico and she hit Ivelisse with her trusty rock. Havoc doing his crazy handspring dive to the Disciples on the outside was awesome. Mil caught him with the spear and Flatliner though to add yet another tally to his death count, and yet another lick of death from Catrina. A very fun middle of the show match. ***1/2

Texano is cutting a babyface promo in the ring. A very contradictory promo at that. It was all kinds of odd with Texano saying “I don’t care about anyone, I enjoy breaking people for my amusement, my own family can’t even trust me but I love Mexico and Chavo needs to be beaten at Ultima Lucha for what he’s done to people like Sexy Star and Blue Demon Jr.”

You can clearly see Texano is having some trouble adjusting to this badass anti-hero role when he’s pretty much been a massive rudo for years. So we’re most likely getting Chavo/Texano at Ultima Lucha. After that, The Crew attacks Texano until Blue Demon makes the save. We also get the mention about Chavo’s hamstring injury. But wait, The Crew slides Demon a chair and he nails Texano!? Well that’s a swerve. He just kicks the crap out of Texano, even busting him open. Demon says he IS Mexico and doesn’t need anyone fighting his battles and will be fighting Texano at Ultima Lucha! Guessing Chavo’s injury prevented him from being Texano’s opponent so they pulled this move. Could be interesting.

Whoa whoa whoa, this could be a pretty great main event. A Johnny PUTO chant breaks out, too funny. Mundo and Patron start but Mundo being a wuss heel, immediately tags in Evans. Aerostar eventually tagged in and proved how well him and Evans work together. This match eventually broke down into chaos like most of the multi-man matches on this show (not a complaint, it’s great).

Insane dives from the likes of Aerostar, Drago and Sexy Star. Mundo got chased up the stairs and out of the picture by Alberto but eventually made it back down. Hernandez is much better in these tag type of matches since his strength is a complement to the agility, and not just the focal point of a singles match. This was a greatly paced match, with almost no slowing down and constant action happening from everyone involved, no one faded into the background. Mundo, the cowardly SOB he is, stole a cheap win over Sexy Star by grabbing her tights off a crossbody! Good stuff here to main event tonight’s show. ***3/4

While Striker and Vampiro announce a face to face confrontation with Mil ad Puma next week, Pentagon appears in the crowd and kicks Vampiro in the back of the head and smashes him with a chair! Pentagon says he’s going to destroy this shell of a man and then gets GASOLINE. GASOLINE FOLKS.

Pentagon continues to tell Vampiro he isn’t afraid of him, it’s the other way around. He threatens Vamp’s family that he’ll burn them if he doesn’t accept the challenge within a week. This crazy bastard holds a lighter in his hands while looking at the camera and blows out the flame to end the show. WOW. What a note to end the show on.

Final Thoughts: MUCH better than last week’s show. This is what I want to see. There was a much bigger focal point on good wrestling this week and it showed with that Atomicos main event and even the two undercard matches. The Vampiro/Pentagon stuff was absolutely superb and I can’t wait to see this at Ultima Lucha, regardless of Vampiro’s age. Pentagon comes off as one of the most sadistic heels in wrestling right now and they’ve finally gotten him back on the right track after the Sexy Star mishap. Mil continues to look like an absolute monster for his upcoming title match with Puma. The road to Ultima Lucha is a bright one and more and more is starting to become clear. This episode is a definite watch. 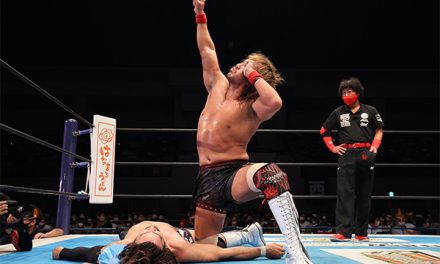 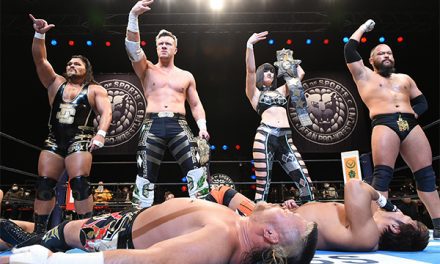