Dominion is New Japan Pro Wrestling’s second biggest show of the year and should mark the conclusion of five long-running feuds that have been the focus of the promotion in 2015. Scores will be settled and much of the storyline slate will be cleared ahead of the G1 Climax, which starts just two weeks after this event. Previous Dominion shows have come from the Osaka Bodymaker Colosseum, but this year, New Japan have gone all out and hope to fill the Osaka Jo-Hall, with twice the capacity of the now-former Bodymaker. The last time New Japan went big at the Yokohama Arena, they failed to draw anything close to a sell-out, but with six championship matches and the conclusions of several big feuds on the card, Dominion will fare better:

Only standing room tickets for 4000 yen will be available on Sunday for the walk up to #njdominion.

The exact same matchup for the Jr. Tag titles as was at Wrestling Dontaku; if you’re going to talk about stagnation of New Japan booking, the Jr. Tag division is where you’ll find it most. That said, it’s a really good matchup and you know exactly what to expect by now; lots of flips, superkicks, flashy moves and no psychology. It’ll be a hot opener for sure, but when I think back to last year’s Dominion and the Bucks/Time Splitters match that opened that show, I’m disappointed at the lack of 2-on-2 Jr. Tag matches so far this year. That match wasn’t just a great spot-fest; it was also an excellent match outside of the ‘movez’. Hopefully we’ll get some more straight 2-on-2 title match in the second half of the year between any combination of these teams, because RPG Vice/Bucks from Invasion Attack was the best Jr. Tag title match from the first half, and I’d love to see more follow on from it.

An otherwise un-intriguing undercard match has been spiced up by Naito’s new dick-heel attitude, as he has disowned the NJPW Army for his new loyalty to CMLL’s Los Ingobernables. This is the perfect move for Naito, who has been lost in the shuffle in 2015, and can now further explore the heel side of his character that he occasionally brings out in matches where the crowd is against him. For the other participants; Honma gets to continue his fight against the Bullet Club B-team, with Fale and Yujiro making up that contingent this time.

This rivalry flared up after Sakuraba forced Shibata to tap out at Invasion Attack, and since then Shibata has been hell-bent on returning the favor. Both men have an MMA background, but Sakuraba’s career was far more successful, so real life plays into Shibata’s storyline jealousy. Sakuraba’s big New Japan singles matches against Nakamura and Suzuki at Wrestle Kingdom were both great, and this one should be in a similar vein. Sakuraba can be very boring when having a worked MMA fight, but those Tokyo Dome matches were very compelling because they were fast-paced and mostly strike-based, keeping the action exciting at all times. As long as this match maintains the latter style, it should be a lot of fun. I expect Shibata to win since he’s in the G1, but neither guy needs to be protected, so the victory could go either way.

KUSHIDA’s journey to the top of the Junior division is almost complete; after his loss against Ricochet in an epic final match at last year’s Best of the Super Juniors and a brief run with the title with no defenses, KUSHIDA finally realized his potential as the future ace of the Junior division by defeating Kyle O’Reilly in a Match of the Year contender to win this year’s BOSJ. The only man in his way now is Kenny Omega, who faces the first big threat to his Junior Heavyweight Championship. Taguchi, Dorada and Shelley were big scalps for Omega, but none were believable threats to topple him. For KUSHIDA though, the time is right to start his push as the Junior ace, so there is a very good chance of a title switch here. Omega’s incident with Ibushi and the Bullet Club at Invasion Attack has him primed for a run as a big star as a heavyweight down the line, so while his Junior title run has been good, it’s not representative of his future role in New Japan. Considering all that, this could be the only Omega/KUSHIDA singles match that will ever happen, and it should be a blast.

I was definitely the high-man for the Makabe/Ishii match from Wrestling HinoKuni; Ishii struggling against a bigger opponent is a fun change of pace from his usual match structure and Makabe managed to match Ishii’s intensity. It was much better than their good-but-too-short match from Wrestle Kingdom, and I’m very much up for Round 3. Ishii can lose again here and not lose any credibility, while Makabe should get at least one defence on the board since the NEVER title has been hot-potatoed as of late. It’s been a fun feud between these two, but it’s time for both to move on to some new opponents.

It’s fair to say that The Kingdom have not had a good start to their New Japan run. The Maria antics are fun in moderation, and the video package showing the most ridiculous moments of this feud was a riot. However, the in-ring action has been poor, and the Japanese crowds aren’t reacting to Karl’s ill-fated attraction to Maria. The worst aspect of this feud is that the Tag Team Championships have become part joke, part afterthought, and the men holding them may as well be the red and green training dummies from the WWE video games. Bennett’s only here because Maria is here, and Taven is only here because Adam Cole was injured. When Meiyu Tag won the titles at Wrestle Kingdom, we all had high hopes for a good, lengthy run. That being replaced by a comedy feud revolving around Maria obviously comes with some disappointment, and while Goto and Shibata have been compelling in 2015, unharmed by their sudden title loss, the New Japan tag division is still in dire straits. Maybe Naito can bring over La Sombra in the autumn, but something needs to happen to make the division exciting again.

Tanahashi finally got one over on the Sublime Master Thief at Wrestling Dontaku, using Yano’s own under-handed tactics against him to pin him, setting up this showdown match. It’s been a big fall for Tanahashi from winning the main event of Wrestle Kingdom to being repeatedly embarrassed by Yano, but here he seeks to put Yano behind him for good ahead of the G1. This feud has not been everyone’s cup of tea, but it has been fairly enjoyable, while also keeping Tana fresh for the G1, where he should put in some great performances across the tournament. In tags, the impact of Yano’s trickery is negated since everyone else in the match also has to get their stuff in before it can end, but Yano’s shtick is much more enjoyable in singles matches where any of his cheap moves could end the match at any time. That means that this match could seriously deliver in excitement; Tanahashi knows Yano’s tricks now and may well resort to them himself, while Yano will go to the well to find a strategy to upset Tana once more. Expect the unexpected in this one. Tanahashi should win to finally gain revenge on Yano, but seeing how he will get there should be fun to watch.

Goto handed Nakamura his first singles loss since the G1 Final at Wrestling Dontaku, and since then has received top billing among the NJPW Army in the 8-man and 10-man tags that he has wrestled since then. Usually Tanahashi would receive that treatment, but Goto holding the IC belt puts him higher on the totem pole; a clear indication of how important the title has become. Goto may never hold the IWGP Heavyweight Championship in his career, but he’s still being treated like a major player with the IC title. His ‘choke artist’ reputation may finally be slipping away. Of course, Nakamura will be hoping to put that reputation back on Goto by regaining ‘his’ championship. This feud has had a simple but very strong build that has showcased Goto very well; Nakamura overlooked him and got pinned twice, showing that Goto is among the New Japan elite, but now he needs to confirm it by putting Nakamura away one more time. Expect plenty of extra intensity from both men in this match to reflect those story developments.

Six months after leaving the Tokyo Dome in tears after his loss, Kazuchika Okada has another chance to win back the IWGP Heavyweight Championship from the man he originally lost it to; AJ Styles. It’s been a good, if predictable, hero-to-zero-to-hero story in 2015 for Okada, who has had to fight through Bad Luck Fale, as well as his own physical and emotional struggles, to earn an opportunity at Styles and the top prize in Japan. Styles has had great success in 2015, but his IWGP title is under great threat here. Styles and Okada fought three times in 2014, and each match was better than the last. Now that AJ is truly a major player in New Japan, this match is likely to be their strongest yet.

This matchup is the same one that drew so poorly at Yokohama Arena last year, but since that show AJ Styles has become a major drawing force for New Japan after selling out Sumo Hall with Ibushi for Invasion Attack. If he and Okada can sell out Osaka-Jo Hall, then Styles has to be in serious consideration for the Tokyo Dome main event. New Japan can go in several different directions for Wrestle Kingdom 10, which makes both this match and the G1 Climax very unpredictable. That’s exactly how we like it though, and that unpredictability makes this match very compelling.

Looking Forward: Most, if not all, of the current feuds will end at Dominion, and the G1 Climax begins just two weeks afterwards. All of New Japan’s shows since Wrestle Kingdom have served to build up Dominion, but the G1 sees the ultimate goal shift to the Tokyo Dome once more. As I see it, five men have a realistic chance of winning the G1; Styles, Okada, Nakamura, Tanahashi and Ibushi. Ibushi only has an outside shot, but all of the other four have a strong claim to main event Wrestle Kingdom 10. From now on, every Heavyweight and IC title match will have implications on the Tokyo Dome main event(s), so the long-term booking of New Japan is about to get very interesting indeed. 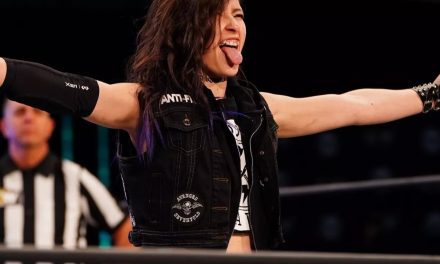 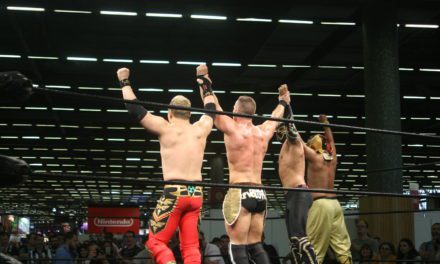