Another double review this week, mainly because last week’s episode was a retrospective episode.

This week’s episode ended up being a studio episode, so I guess we may never get that final episode of Best of British which would have featured The Thrillers vs. The Kingdom.

The first twenty minutes of the episode was essentially a shill for Summer Sizzler. I had it on in the background while I did other things, but there’s nothing really of note here. Summer Sizzler was fantastic though; you should definitely go and pick it up. It’s a legitimate show of the year contender, and it’s not just me saying that it’s getting huge acclaim from everybody who has seen it. You can check out my review of said show here.

The second half of the show this week featured a match from last year’s Uprising: Karl Anderson vs. Dave Mastiff. Here’s what I wrote about it at the time:

These two were scheduled to face off at Summer Sizzler, but Anderson had to pull out of the show and was replaced by Fale. These two big bulls went at it right from the bell. After being outmuscled in the opening exchanges, Anderson started targeting the leg of Big Bad Dave, which allowed him to take a commanding position in the early going until Mastiff managed to counter out of the swivel gun-stun and got the better of a striking exchange. The highlight of the match for me was Mastiff catching Anderson coming off the top rope with a big clothesline, and then following up with a deadlift bridging German, followed by another German suplex into the turnbuckles. That allowed Mastiff to go for his corner cannonball finisher, but Anderson got out the way and then followed up with the swivel gun-stun for a near fall. The finish came later on when Mastiff again was going for his Cannonball, but Anderson caught him running in with a Gun Stun for the three count.

This was fine, but I never really got totally into it apart from the sequence I described above and the finish. For a big man, Mastiff’s strikes always look really weak to me. I’m not generally a big Mastiff fan though, and I know a lot of people are, so some will probably enjoy this a lot. **3/4

Final Thoughts: This episode was entirely skippable, especially if you’ve seen Uprising 2014 already. Many will likely enjoy Mastiff-Anderson more than me, but even so I haven’t seen anybody call it a great match. Give this a skip and if you haven’t yet go watch Summer Sizzler.

This is the first episode of the new batch from the latest cockpit taping. The show kicks off with Marty Scurll interrupting Andy Quildan in the ring and cutting a solid promo on how he feels naked without his title and will be winning it back at Uprising from AJ Styles, and in the meantime is going to be teaching Will Ospreay a lesson for getting involved in Scurll’s business back at Summer Sizzler.

This is Webster’s RPW debut against perennial undercarder the Wild Boar. Webster has been wrestling for around five years and is a regular on the second tier of UK promotions, and now is starting to get booked regularly for the bigger groups like SWE, PROGRESS and now RPW. Webster didn’t really impress me here. While he did some flashy moves overall his offense looked pretty awkward, especially his strikes. On the flip side, despite being used here primarily as somebody to take a fall to the featured debutant, I thought the Wild Boar looked really impressive here. Boar’s offense is by and large fairly basic but what he does do looks really great, almost the exact opposite of Webster from the evidence of this match. Webster picked up the win with a 450 splash.

This is a rematch from a double DQ from a few weeks back, but the feud dates all the way back fifteen weeks ago from the first episode of the show. Prior to the match there was a well put together recap of the feud so far by Quildan. The first match between these two was excellent but had one of the worst finishes I’ve ever seen. This one wasn’t worked at quite the same level, it didn’t build as well as the first one and the pacing wasn’t quite as good, but was still enjoyable. However, while it wasn’t quite as bad as the last one, the finish was still pretty bad, with them brawling to the outside and both getting counted out.

Both guys continued to brawl around the ringside area, before spilling to the back. The camera followed them into the locker room where the whole roster were pulling the two apart. Eventually Bodom’s Revolutionists stablemates managed to drag him away, and the last thing we heard before the show ended was Havoc shouting “You tell him he’s dead”.

These guys having two consecutive matches with bad finishes really is uninspired booking, both times it really deflated the crowd and taken the shine off a good match. This was done to build up to a No DQ match at Uprising, a match I’m very much looking forward to, but there were so many better routes they could have taken. Why they couldn’t have had the two guys trade wins across the two matches and continue to brawl after each of them I don’t know, it would have built up the feud far better and added to the individual matches and shows they were on too.

In 2015 taking a clean pin hurts you far less than a garbage non-finish, especially when you’ve got a hardcore wrestling audience as RPW does. Two good matches build up a match far better than a lazy angle like this, and it might actually help them build some buzz for the youtube show so more people start watching it and are exposed to the build. But what do I know?

Final Thoughts: Unfortunately this was another fairly skippable episode. Luckily sometime over the next few weeks we’ve got Ospreay-Scurll to look forward to, which from all reports was one hell of an encounter. 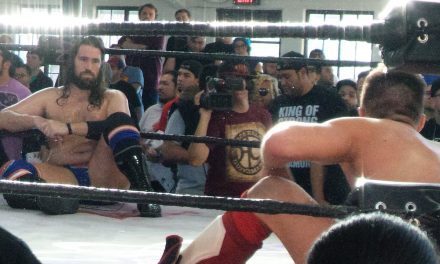