By The Numbers: WWE Money In The Bank Celebrates 10 Years!

Looking back, it’s a miracle for WWE that the match was constructed. Sure, ladder matches have been done before, but usually the prize for such a match was a championship. Now, a ladder match in WWE adds a few more bodies, and the prize of being able to wrestle for a championship later on. It’s WWE’s lottery ticket, usurping the Royal Rumble as the best way to guarantee a championship these days in WWE. Think of all the memorable moments the Money In The Bank matches, and follow up title cash-ins, have brought us! From CM Punk winning his first world championship in WWE, to Rob Van Dam bringing ECW back from the dead with a legitimate champion, to Seth Rollins shocking the world this year at WrestleMania 31, the briefcase has been a special prop in WWE storylines for a decade.

The number of MITB ladder match winners who did not successfully cash in their briefcase for a world title. Aside from Mr. Kennedy, who never cashed in at all, two other WWE Superstars also failed to cash in and win a world title with the briefcase. John Cena, who won the only Money In The Bank ladder match he has competed in, beat CM Punk via disqualification in his cash-in match, thus failing to win the WWE Championship. Damien Sandow, in 2013, cashed the briefcase in against John Cena on WWE Raw, but lost his match via pinfall. Sandow is the only briefcase winner to cash in for a title and lose the title match. It’s been a rough life for Mr. Sandow ever since.

The number of stars, out of five, given to each of three WWE Money In The Bank ladder matches by Wrestling Observer’s Dave Meltzer. A longtime pro wrestling writer, Dave Meltzer often recommends matches based on a star rating. Of the fifteen MITB matches, the most highly recommended by Meltzer are the 2005 inaugural match, as well as the 2013 WWE Championship briefcase and 2014 WWE World Heavyweight Championship briefcase matches. At four and a half stars, those three matches remain the most highly recommended by the widely respected Dave Meltzer. These matches can be polarizing, however, as the 2014 WWE World Heavyweight Champion MITB Ladder Match only earned **3/4 stars from VOW editor Rich Kraetsch last year.

The record for most Money In The Bank ladder matches participated in, held by Christian and Kane. It’s no surprise, really, that Kane is tied with the most MITB ladder matches. The guy just seems to be a part of everything, and with his tenure, he’s certainly had the opportunity to be. Kane competed in the very first MITB ladder match, as did Christian. It only took Kane until 2012 to get his sixth match under his belt, while Christian needed an extra year, wrestling in his sixth in 2013. As long as everything goes to plan, Kane should stand alone with the record after he participates in his 7th MITB Ladder Match on Sunday.

The length of time that Christian has wrestled in Money In The Bank: One hour, fifty six minutes, and fifty two seconds. You could spend an entire NXT Live Special watching Christian’s Money In The Bank ladder matches from bell-to-bell. Christian barely beats out Kane for this record, but with Kane wrestling in Money In The Bank this Sunday, he’s surely to lose the spot in just a few days. Kane will be wrestling in his 7th MITB Ladder Match, and if the match goes longer than about five minutes, he’ll take this match length record down rather easily.

Speaking of time, 19 minutes and 28 seconds is the average length of the Money In The Bank ladder match. The lengthiest MITB ladder match occurred at WWE Money In The Bank 2013, with Randy Orton winning the WWE Title briefcase in 28 minutes and 38 seconds. The shortest, in terms of time, happens to be the final MITB ladder match to take place at a WrestleMania. At WrestleMania 26, Jack Swagger defeated 9 other guys to win a shot at the World Heavyweight Title in 13 minutes and 44 seconds. If you ask any fan watching, most might say that’s how long it felt like Swagger was attempting to unbuckle the briefcase at the end.

The feast and famine number, as there have been five World champions who have both won a title via MITB, and lost a title via MITB. Edge, CM Punk, Daniel Bryan, Alberto Del Rio, and Randy Orton have all cashed in a Money In The Bank briefcase to win a world championship. Now, most think of MITB on that positive side, with the briefcase being a passage way to the world title. However, there’s always someone on the losing side. These five men have been on both sides, cashing in successfully and getting cashed in on.

The percentage of times a Money In The Bank contract holder has cashed in his title shot on Pay-Per-View. Of the cash ins not on PPV, 5 have come on Raw, while 2 have happened on Smackdown. So while 100% of MITB briefcases have been won on Pay-Per-View, only 53% have been cashed in on PPV.

The number of Money In The Bank ladder matches that have featured a field of participants who all had wrestled in previous MITB ladder matches. The 2013 WWE Championship briefcase ladder match consisted of all former MITB participants, and the bout was promoted around that fact. Randy Orton would go on to win that match, successfully cashing in his contract on Daniel Bryan at WWE SummerSlam the following month. The 2012 WWE Title briefcase match was close to having a similarly experienced field, also, as only John Cena was entering his first MITB ladder match.

The amount of money you have to pay to watch this Sunday’s WWE Money In The Bank PPV if you’re a new subscriber to WWE Network. It’s quite amazing that in only two years’ time, the popular MITB PPV has gone from around $60 to $0 to purchase. These are the crazy times we live in, though. Overall, we’re sure to see some new records come this Sunday, as noted through out. We may also see a first time winner, again, as Roman Reigns goes in as the heavy favorite. What numbers do you see getting adjusted after this Sunday? Leave a comment below, discuss the numbers on our forums, and share the article with others you think may be interested in this piece. Here’s to WWE Money In The Bank’s ten years on earth! 🍻

I’ll be back with Jeff Hawkins right after WWE Money In The Bank for an all new Shake Them Ropes, this Sunday, live here at VoicesofWrestling.com on the STR page! 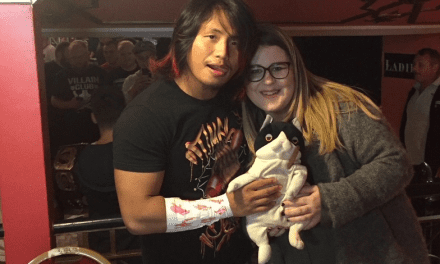