New Japan Pro Wrestling returned this morning with a live New Japan World broadcast from Korakuen Hall — the last Best of the Super Juniors show before the finals this weekend. Kushida already punched his ticket, but who will join him in the finals?

Best of the Super Juniors (A Block) – Yohei Komatsu vs. Beretta

Fast-paced match that was full of action. Komatsu got the half crab and managed to transition to an STF but Beretta grabs the ropes. Beretta follows with a tornado DDT and takes him to the apron, where he slams him with a fireman’s carry. Komatsu makes a tremendous comeback, kicking out of Beretta’s knee strike, then mounts a great comeback, but gets caught with another knee strike and is pinned. Really great opener. I’m not too bummed that Komatsu got zero points here since he’s still considered a young lion, but it seems clear enough that people are getting behind him already, and he’s already consistently great. Let’s do something with him already! ***3/4

Best of the Super Juniors (B Block) – David Finlay vs. Tiger Mask IV

There were times that things seemed a bit off between the two, but mostly just solid back and forth work. Finlay kicked out of the Tiger Driver, but eventually submitted to a modified crossface chickenwing. For the record, both him and Yohei Komatsu ended up with no wins in this tournament. Finlay did fine on the tour and with time he’ll probably be pretty great. **1/4

Best of the Super Juniors (A Block) – Barbaro Cavernario  vs. Jushin Thunder Liger

Liger and Cavernario started things off by doing some mat wrestling, exchanging surfboards. Liger exits the ring and Cavernario fires off with a tope con hilo across a ring post to the floor on Liger then followed with a giant splash from the top rope to the floor. Liger cut him off with the palm strike and a liger bomb. Cavernario made a comeback, got frustrated, then Liger cut him off and won with a brainbuster. Short, but full of action and cool high spots by Cavernario, who had a great run on this tour. ***

BLEH. I’m so sick of seeing these pairings already. Sadly, we’ll probably see a variation of it again on Sunday. Imagine if I had to watch every show in full that featured these guys in tags, I’d probably go crazy. This went like you’d expect — everyone paired off with their rival. Tanahashi had the heat on him briefly, but then it went back to guys working with their rivals. Goto laid out YH and had Honma go for the Kokeshi but YOSHI-HASHI dodged. Goto went for a lariat but YH blocked it. Nakamura came back and attacked Honma, looking for the Boma Ye but Honma came back with the tornado Kokeshi. Ishii took him out and Nakamura got the Boma Ye, but everyone came and broke it up. Everyone separated again, then Nakamura pinned Honma with another Boma Ye. Good action throughout with a fun ending, but it’s been done. ***

Shibata was laid out with an armbar by Sakuraba then Nakamura struck Goto with a boma ye after the match, cutting a promo on him. They’re continuing buildup towards Dominion, I’m assuming.

Best of the Super Juniors (B Block) – Mascara Dorada vs. Rocky Romero

Romero came to the ring wearing a dual Black Tiger/Dorada mask — he likes to wear the mask when he’s facing other masked people. Romero with a big suicide dive on Dorada at the start. Dorada soon topped that with a step up tope con hilo to the floor. Turned into a solid back and forth match. Dorada got the win after Romero got crotched and Dorada hit a hurricanrana, followed by a Michinoku Driver. **3/4

Best of the Super Juniors (B Block) – Bobby Fish vs. Nick Jackson

Jackson had Cody Hall out there as a second. He got laid out accidentally by Nick, but then he took out Fish which allowed Jackson to get the heat. They actually did a spot where Jackson kept telling Fish to suck it then a dazed Fish headbutted him in the nether regions. They also did a spot where Cody Hall grabbed Fish and carried him all the way backstage for a count out tease, but sure enough Fish came back at 19. I thought that was rather clever. Nick kicked the ringpost by accident and Fish made a comeback and started work on the leg. They had a great sequence of back and forth action before Fish caught Jackson and laid him out with a falcon arrow for the win. This would put him in position to compete for third place since he’s beaten Dorada already.  ***1/2

Best of the Super Juniors (A Block) – Gedo vs. Kyle O’Reilly

The story of the match initially was that Gedo was working as the babyface underdog as O’Reilly worked on him. He made a comeback and worked on O’Reilly’s leg, including wrapping it around a post in the figure four position. They worked for submissions towards the end. Gedo went for a roll up but O’Reilly caught him and worked with a armbar. Gedo caused a ref bump, low blowed O’Reilly and hit the superkick, complete shot and Gedo clutch but O’Reilly kicked out. After Gedo kicked out of a brainbuster O’Reilly followed with an armbar that eventually got Gedo to tap. This was the best match of the night, with lots of great back and forth work, mat wrestling, and the last few minutes were pretty damn great. Both of these guys were the real underdogs of this tournament. ****

Best of the Super Juniors (A Block) – Ryusuke Taguchi vs. Chase Owens

Taguchi came out wearing earphones, mocking Owens since I guess he comes out with some too. I thought he just looked like a total geek. Back and forth early. Taguchi hit a huge tope con hilo on Owens to the floor. They worked on body parts with Taguchi working over Owens’ leg and getting the ankle lock in a couple of times. Owens removes the padding on the mats and tries for the package piledriver on the exposed hardwood floor but Taguchi escapes and hits a DDT. Taguchi hits the Dodon, then poses like Nakamura and hits a seated hip attack. Taguchi did his pose then went for another Dodon, but Owens counters and out of nowhere hits the package piledriver for the win. That puts Taguchi out of the finals and O’Reilly in, so it’s Kushida vs Kyle O’Reilly in the finals. Good, solid match. Please don’t look at how I reacted on Twitter as I do my very best to conduct myself in a professional manner…and my glee of this result just sorta came out, y’know? ***

O’Reilly, bum leg and all, hobbled to the ring as he and Kushida, who was on commentary all night, had a staredown. O’Reilly left as Kushida cut a promo and the show ended.

Final Thoughts: This was a really fun show, slightly better than the Korakuen Hall show from a few days ago. O’Reilly/Gedo was a fantastic match and the opener is pretty damn great as well. Kushida and O’Reilly is bound to be an awesome match, not sure if it’ll be as good as the finals match from last year, but there’s potential. I was looking forward to the finals regardless of who ended up headlining, but with this main event Sunday’s show has got to get the hype train rolling full speed ahead.

Voices of Wrestling Best of the Super Juniors Pick’Em Standings
(Please support our sponsor IVPVideos.com and take 25% off your next order using coupon code “VOICE”) 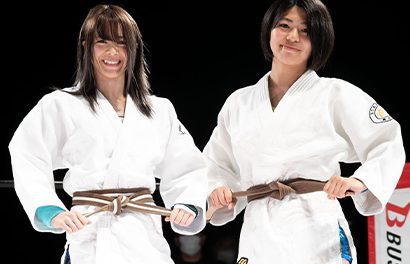