This is the first episode of a new era for Ring of Honor television as the program makes its debut on Destination America. The ratings are already in and ROH appears to have performed more than admirably, especially considering that Destination America’s relatively low investment. The company has chosen not to do any sort of reset here and simply start by airing the episode that was already planned to air on their Sinclair channels this week.

Part of that decision is likely influenced by the fact that we are only two weeks away from ROH’s Best in the World pay-per-view. The big question from my perspective is whether ROH will use their television to make viewers want to buy that show or just show some random matches and hope people buy it anyway.

The episode starts strongly with a Jay Briscoe promo. However, brother Mark jumps in and even Jay realizes things are going off the rails as he basically cuts Mark off and takes control. The Briscoes think Jay Lethal has been ducking the ROH World Champ, Jay Briscoe, so they are excited to wrestle Lethal and Donovan Dijak tonight in your main event.

Will Ferrara vs. KUSHIDA: Tonight’s matches are from Global Wars: Night 2, the last of ROH’s four joint shows with New Japan Pro Wrestling. The Canadian crowd was overtly partisan in its support for countryman KUSHIDA. It seemed to take Ferrara a second to perhaps shake off the nerves but once he was able to settle down, he had some great fire. Overall, Ferrara ended up getting just the right amount of offense, which was not much. However, it allowed him to show his potential while KUSHIDA remained protected. The story of the match was relatively compressed as just a small amount of arm work led to a submission finish in KUSHIDA’s favor. **1/2

The Addiction crashes the commentary table in their super heel sunglasses to tell us they’ll be giving reDRagon one shot (and only one shot!) at the titles on ROH TV next week.

Silas Young vs. Takaaki Watanabe: Watanabe and Young were tag team partners on Global Wars Night 1, which was the iPPV of the ROH/NJPW shows. After a less than stellar showing by the team, Young took out his post-match frustrations on Watanabe. And that had led us here. This is not going to please my colleague, Warren Taylor, but Silas Young does not appeal to me at all. The gimmick just doesn’t entertain me. But this was fun! Watanabe showed some real charisma and got the crowd on his side. He also had much more aggressive offense than I’ve previously seen from him. This is the most excited I’ve ever been about Watanabe. However, my excitement was not enough to stop Silas Young from hitting a spinning Ace Crusher for the win. **1/2

Kevin Kelly and Steve Corino promise us BJ Whitmer versus Moose. But apparently someone told ROH that having Whitmer wrestle on their first national television broadcast was not the path to success. Unfortunately, they still let him get on the mic. Whitmer said he was going to let someone else step into the spotlight to face Moose, and that person is… Colby Corino.

Moose vs. Colby Corino: Honestly, this was kind of awesome. Poor Corino weighs about half as much as Moose so Moose just threw the kid around. All of his offense looked completely brutal. It was a quick devastation for Moose, who needed to play only a boot on Corino to get the three count. NR

As much fun as this was, it was nearly ruined by Steve Corino’s commentary.  His son is out there getting ripped apart but Steve just did not seem that concerned.  It was a really poor job on his behalf and not the kind of effort you usually expect from Corino.

We have a vignette with Truth Martini reading the Book of Truth leaning up against the hood of his car! Jay Lethal comes out to talk to him and they foreshadow that Lethal will not be wrestling the advertised main event featuring he and Donovan Dijak versus The Briscoes.

Mandy Leon shows up next and introduces a number of videos recapping the Adam Page/ACH feud. Folks, ROH is using their television to set up their pay-per-view! If you read these reviews regularly, you know that is a major gripe I have with the company. But this is how you use this hour to build to June 19’s Best in the World PPV, especially for the new viewers tuning in on Destination America.

The House of Truth (Donovan Dijak & Jay Diesel) vs. The Briscoes: This was mostly a vehicle to sell the Lethal/Briscoe match at Best in the World with Lethal on commentary throughout. I liked that they didn’t put those two in the ring together with two weeks left to go before the pay-per-view. Despite the ulterior motive for the bout, these guys all worked hard and put on a very fun television match. I wish I didn’t think Jay Briscoe is a miserable human being because he’s one of the most awesome in-ring performers in the world, considering his character work and intensity. Dijak continues to show promise as he didn’t look out of place here. But Jay Diesel… his boxing-influenced punches look so bad. And his selling in this match was abysmal. Still, he had no shot at bringing down the quality of this match thanks to everyone else’s energy and execution. Martini tried to distract the ref to get an advantage for his guys but The Briscoes were undeterred and finished off the House of Truth with a Doomsday Device. ***

After the match, Lethal distracted Jay Briscoe long enough to let Dijak hit Feast Your Eyes on Mark. But that was the end of Lethal’s fun as Jay Briscoe decimated him in the ring and ended the show standing tall.

Final Thoughts: Overall, I thought this was a solid national television debut for Ring of Honor. It was certainly much better than I’d been led to believe by the reactions on Twitter. I’m not sure all these matches featured the talent I would have wanted to spotlight for first-time viewers but this was a good hour of television. None of the matches were great but none were offensive, either. It was an easy watch with short, energetic matches that would’ve made me want to at least give it another chance if I were seeing ROH for the first time. For those of us who watch ROH regularly, the great part was the build for the upcoming pay-per-view.

I’m looking forward to Lethal/Briscoe more than any other upcoming PPV match in any company. The build has been fantastic and I honestly don’t know who is going to win. It would seem strange to have Briscoe finish Lethal’s great run as Television Champion but it would seem stranger still to have Lethal end Briscoe’s two-year streak of not being pinned or submitted. Of course, perhaps there would be no stranger thing than seeing a black champion holding up a belt that prominently features a Confederate flag. No matter what happens, I’ll be watching and I expect the next two weeks of ROH TV will get me even more excited about it. There were no matches on this show you have to see but I wouldn’t handwave this episode. It’s fun. 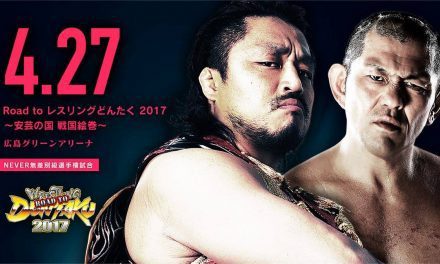