Last week’s episode of Lucha Underground saw a lot of turmoil, as we saw Johnny Mundo (somewhat) explain his actions against Alberto El Patron, Daivari hiring Big Ryck to protect him from Texano Jr. and the Trios champs Ivelisse/Son of Havoc/Angelico defend their titles in a ladder match against The Crew. They were also successfully in warding off The Crew’s attempts to make them a sacrifice for Dario Cueto. This week is bound to be more chaotic as the tension between Hernandez and Prince Puma has boiled over into their title match for the night and Mil Muertes is out for blood against Fenix, the man who buried him, in a main event deathmatch.

The opening to the show reminds us of the Grave Consequences match and the recent resurrection of Mil Muertes to end Fenix’s life. It also shows us the tension between Hernandez and Puma, as well as the Mundo/El Patron situation, where Mundo cost Alberto the #1 contender spot against Hernandez when he threw him through the window of Dario’s office.

Chavo tells Black Lotus who arrives at the temple that he’s supposed to protect her. She of course doesn’t want it. Chavo tells her to get revenge the right way: In the ring. He knows how she feels because the Guerreros hate the Cuetos as well and his grandfather was there when Dario’s brother killed her parents.

Johnny Mundo vs. Aerostar: The big story in this one was how Johnny Mundo worked in this. He smartly didn’t just try to act like a heel while doing the same moves, something many tend to do now. No, he worked a very aggressive slugging, ground and pound style attack that was incredibly different from what you’re used to seeing from him. It worked to get across the point that this is the new aggressive Johnny Mundo. Yeah, he does some of the parkour like offense you expect from him in this, but not to the extent of his babyface version of the character. While Aerostar was able to get some intermittent hope spots in with his high flying ability, this match could almost be categorized as a well-worked extended squash because Johnny really just took it to him. Vampiro in the middle of this referenced that there’s a drinking game out there for how many times he says brother on the show, and proceeds to say brother about 10 times in a row. Vampiro is on the rise as the funniest color commentator in wrestling.

The finishing sequence was pretty cool, as Aerostar went for the tornado DDT, but Johnny stopped his momentum in the front facelock, and flipped him back for a northern lights suplex, then hitting The End of the World for the win. Very interesting direction for Mundo’s character. One thing that bugged me in this though was Striker saying earlier in the match that Mundo did not change his style, but then at the end of the match said that he changed his style to be more aggressive aligned with his new attitude. You always find these strange inconsistencies in Matt’s commentating, I just wish he fact checked himself a lot more and remembered things he said a very short time ago. ***

Our next segment is Vampiro doing his great sit-down interview, this time with Sexy Star. He asks about Sexy Star trying to stop Pentagon and if she’s worried he’ll hurt her. She snaps right back at him and asks him if he would be asking that if she were a guy. He asks if the mask match with Superfly affected their friendship, and she states that she hasn’t heard from him and he’s rehabbing his broken arm. Vampiro asks her about the match with Pentagon and she said she hoped it inspired women to stand up for themselves and scream that they aren’t afraid. Dario has apparently given a rematch to Pentagon in a submission rules match for next week, and Sexy Star tells Vampiro that he hasn’t seen the submissions she knows and that this thing between her and Pentagon will end next week. Very cool interview, Sexy Star exhibits a ton of confidence and charisma here.

Lucha Underground Championship – Prince Puma (c) vs. Hernandez: Puma plays great mind games in the beginning as he send Hernandez out of the ring, teases the suicide dive but instead backflips and mocks Hernandez’s signature strut. For awhile though, Hernandez slowed the pace down and asserted his power game against Puma. The camera and audio would go to Konnan sometimes showing him giving Puma advice/coaching throughout which was a neat little addition to the psychology of the viewer. The tides turned though when Konnan started to get up on the apron to distract the ref after Hernandez shoulderblocked Puma to the outside. While Puma was outside, he grabbed a chair from under the ring! Hernandez went to dive to the outside and Puma swatted him in midair with the chair! Wow, the story they’re going with here is that Konnan finally broke Puma and that Puma maybe had some self doubt about being able to take down a beast like Hernandez with a normal gameplan.

Did someone call the cops, because Hernandez just got SWATTED! #LuchaUnderground pic.twitter.com/XFqUhJ1FNw

Once Hernandez recovered, he blocked a Puma kick hard then gave him the Border Toss into the apron. Eat your heart out Kevin Owens. He went for another Border Toss but Puma countered; he ran back at Hernandez who threw him up to the metal fence where Puma landed perfectly on his feet and hit one of the most beautiful corkscrew dives you’ll ever see. Puma followed that with a springboard 450 to Hernandez in the ring. What can’t this guy do? But he misses the 630 splash. Hernandez hit a killer move that I had no clue the name of, but Puma barely kicked out. Hernandez plants him with a powerslam, but missed a top rope dive and hit Puma’s knees. Puma, in dedication to his evil twin brother Ricochet’s former promotion Dragon Gate, hit Dream Gate Champion BxB Hulk’s signature kicks to the head and axe kick to the top of the skull for only 2! He went for a 630 but Hernandez got up to stop him. But Hernandez ended up on the receiving end of two roundhouse kicks and Puma hit the 630 to retain the title. Wow, this sure surpassed expectations of pretty much everyone I think and a testament to the wrestler that Puma is. A wonderfully worked match. Who can beat this guy? ****

Deathmatch – Fenix vs. Mil Muertes: Well, someone is going to die tonight. Dario craves a sacrifice for the gods, and damn it he will get it after this is done. What these two did in that Grave Consequences casket match was nothing short of remarkable and completely redefined the way we look at gimmick matches in general. So my expectations are high here. Mil’s entrance is pretty great and features not only Catrina, but those three men in the skull masks that encountered Fenix in the locker room recently. Looks like we have another trios team for the near future, huh? Note that Mil has ditched the powder blue mask and pants and now has black ones. Fenix tries to get the jump on Mil with a quick outside dive before he got int he ring, but Mil shrugged it off like a fly hit him. Oh boy. He tries again, and this time Mil hit him with an absolute grizzly forearm that made me go HOLY SH*T for real. Mil just dominates poor Fenix for awhile, Vampiro does a great job acting like he’s scared shitless of what’s going on during this.

Fenix is able to get a little momentum back when he enziguiris Mil on the top rope, then hits the rope walk round house kick sending Mil to the outside! Fenix followed that by an insane lionsault to the outside. Striker did something good here as he noted that where Mil was outside, the last time he was in that same spot he was being carried out in the coffin so it must be in his head. Neat call back there Matt. Mil just kinda shrugged it off again and gave a huge clothesline to Fenix. He grabbed a chair and hit Fenix with one of the most damn unsafe unprotected chairshots I’ve seen. Lord. Mil proceeded to slam him into the metal fence, but Fenix came right back and did the same to Mil, kicked him to the floor, then hit a double stomp from the metal fence. The magic is happening between these two again. Matt and Vamp make a note of the counter clockwise pattern that Catrina and the three masked men are walking around the ring as to signal some sort of energy being formed, eerie stuff.

Mil did something so out of his wheelhouse in hitting Fenix with a crossbody to the outside. He then just brutalized Fenix on the outside by hitting with the chair, slamming him into the commentary desk. Mil carries Fenix up the stairs to the balcony. What the hell is he doing? Sure enough, he powerbombs Fenix straight through the top of the balcony into the locked room below. This show has so many spot of the year contenders by this point that it isn’t even funny. They call for a break as Marty Elias needs someone to unlock the door to get the probably dead Fenix out of there! The three skull mask men kick the door down instead and carry Fenix out above their heads sacrifice style to Mil, who give some last evil looks at the nearly lifeless Fenix as to remind Fenix what he did to him in the past and hits the Flatliner for the 1-2-3. They did it again guys. This was very close to Grave Consequences in terms of quality. This was just filled with so much malice and Mil did a great job the whole match of communicating his pure hatred for Fenix for thinking he buried him and took his woman in the process. Awesome. ****1/4

After the match, Catrina came in with the masked men and gave Fenix the lick of death to put the seal on this one.

But wait. One more segment is what we’re left with here. Dario is down in the basement where is brother is and asks The Crew if they have any excuses left for him. He called them an embarrassment and tells them to choose who has to pay for this. Well, in not much of a surprise, the two original Crew boys Cisco and Castro choose Bael and Dario tells them to hold him up against the bars of his brother’s cell. Dario’s brother just absolutely maims Bael to death, with blood spattering all over Castro and Cisco, and even Dario who wiped a single smear of blood on his face and asked if he had made himself clear. My goodness, what a visual this made for. Movie production type of stuff here you never get to see in any other wrestling promotion. What a impression to leave the viewer with to end the show.

Final Thoughts: A very good, if not great episode in the books this week. Mundo’s opener against Aerostar was a solid contest that reinforced Johnny’s new aggressive attitude with his new ground and pound heavy style. Puma got a match out of Hernandez that almost no one thought he could, while showing some shades of gray in his character with the chairshot he used on a diving Hernandez. And once again, Fenix and Mil Muertes told a story so immersive, so magical that you couldn’t help but be sucked into the spectacle of it all. Dario was also at his best at the end of this show, showing us just how sick and sadistic of a man he is in order to get what he wants. 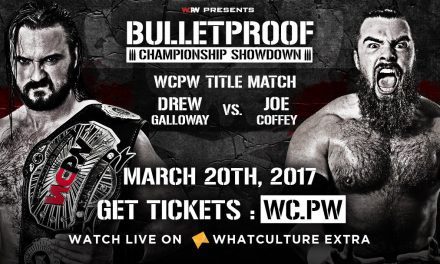 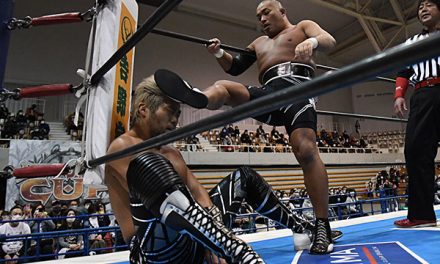