Tonight’s all new episode of WWE NXT set out to answer some questions that we had after NXT Takeover: Unstoppable. Will Finn Bálor head right for the NXT Title? Will Kevin Owens and Samoa Joe cross paths again? How would William Regal respond to being knocked out by Kevin Owens? What’s next for Baron Corbin? These answers and more on an all new NXT!

If you missed NXT Takeover or want to hear some thoughts on the show, catch our recent episode of Shake Them Ropes as we went live, post-Takeover, with our reaction show!

Solomon Crowe earns an opportunity: Kevin Owens, out to Sami Zayn’s music to troll us all, told the people that he was a good man. He did us a favor by taking out Sami Zayn forever. He did what he said he would do, and that’s put an end to Zayn. Growing more heated when addressing Samoa Joe, Kevin told us that he could drop Samoa Joe “like that.” Clicking his fingers while hitting the key note, Owens again said he’d drop Joe “like that” if he was ever in the ring with him again. So who comes out to respond to Owens’ proclamation but Samoa J… err, William Regal. Owens didn’t let Regal get much out before reminding him that it was Regal who grabbed Owens first at Takeover. Regal said he’s been losing too many dudes, guys like Riley, Zayn, and Itami, all to Owens. Owens swore he didn’t take Itami out, but gleefully claimed triumph over the other lost souls. Before Regal could accomplish his purpose for coming to the ring, Solomon Crowe intervened. Creating his own opportunity, Crowe said he was sick of Owens’ garbage talk. Owens, without much hesitation, offered Crowe a match for later. Oh, good, Crowe is the new CJ Parker! That didn’t take long.

Backstage, Zack Ryder and Mojo Rawley were staying hyped. I, for one, cannot wait for a future Takeover battle between those two and Marcus Louie and Braun Stowman.

Evil Emma vs Bayley: Emma walked to the ring side-by-side with Dana Brooke, as new entrance music played her down. She’s got the dark lipstick, she’s got the red gear, she’s got the too-good-for-this attitude. Emma is so great. Dana Brooke can be so great. Bayley fills her needed role perfectly. This was a segment full of winners, and the match wasn’t bad either. Helping to get Emma over in her more serious role, as well as recover from the Takeover loss, Emma submitted Bayley to the Emma Lock. Afterwards, Dana Brooke jumped into the ring to aide Emma in furthering the punishment on Emma. Somebody help her! Charlotte, obvously sensing the urgency, rushed to the ring for the save. Unfortunately for her, that damn numbers game wasn’t in her favor. Dana and Emma teamed up to take out Charlotte, with Dana planting her with the Diva Driver. That’s the unofficial name, made up by myself, but the term Samoan Driver doesn’t really fit The Total Diva’s aura. SEE THIS MATCH. It was the best on the show.

Baron Corbin was confronted backstage after Takeover by Rhyno. Smiling, Rhyno asked Baron to do it again some time. Rhyno vs Corbin 2 may outdraw WrestleMania.

Corey Graves pitched an upcoming initiative entitled “NXT LOUD.” Basically, it’s NXT giving a chance to emerging and lesser known bands to provide a song for entrance music while getting an on screen credit in the deal. It’s really what some non-lazy indies do for local bands. “Hey, give us a song and it’ll be good exposure” as it plays a fat, pill-popping yarder down to the ring in front of twenty fans in Nowhere, Pennsylvania.

Blake & Murphy w/ Alexa Bliss vs Elias Samson & Mike Rawlis: Alexa Bliss is now matching “her boys” with red and black gear. Let’s just say… it’s quite the positive move. Corey Graves couldn’t stop beaming in audio form over this trio, and boy is he right. This team is going places! Or, at least one of the three are. Bet you can’t guess which one! (Spoiler alert: It’s Alexa). When I went to NXT in February, Mike Rawlis and Chad Gable had a hell of a match before the TV tapings began. Rawlis is a big guy who can move, and hopefully isn’t destined to the Elias Samson role for long. As for the match, it was an extended squash, as never at any point where the champs really in trouble. Blake pinned Elias after a top rope frog splash for the win, before Alexa landed her Sparkle Splash for further insult. Watch this match! Really. Team Blackberry Messenger is actually an entertaining trio.

After the match, Devin asked why Alexa was hanging out with these guys. Alexa is a winner. Blake & Murphy are winners. Winners gravitate towards each other, she said. Alexa called Carmella garbage. #ShootWeek. Alexa was spitting hot fire, taking down Carmella with the greatest of ease. I love a motivated Alexa working with a clear direction.

Finn Bálor vs Tye Dillinger: No surprises here, as Bálor defeated Dillinger with the Coup de Grâce in two minutes. There have been a lot of “solid hands” on this show doing “solid hand” duty. Elias, Rawlis, Dillinger, oh my.

CHAD GABLE! JASON JORDAN! Jason Jordan was working out when Greg Hamilton rudely interrupted. Jason Jordan said he had a new tag team partner and would be returning soon. Chad Gable, trying to find his own spot on NXT TV, begged Jordan to team with him. Jordan put him on the wait list.

Solomon Crowe vs Kevin Owens: This did not go so well for young Solomon, here. Although Crowe did have a few spots of hope, they were brief, and in the end, Owens juiced this orange with a pop-up powerbomb for the victory. Watch this match! It featured Kevin Owens.

After the match, as he is one to do, Kevin Owens set up Crowe for the powerbomb on the ring apron. Luckily for Crowe, Samoa Joe showed up again. Dressed to wrestle, Joe strolled down to the ring to take Owens up on that promise to put him down “like that.” Kevin Owens turned out to be a liar, though. Under the veil of showing mercy, Owens bailed from the ring when Joe got in. Owens shouted, “Next time, that’s you!” while pointing at the fallen Crowe, and “You should’ve stayed in oblivion, buddy.” Owens left, Joe gnarled, and that awful theme music of Joe’s played us out of this last episode of May.

Next week, NXT TV goes up against Ring of Honor on Destination America. Seriously. It was a crazy Wednesday today. 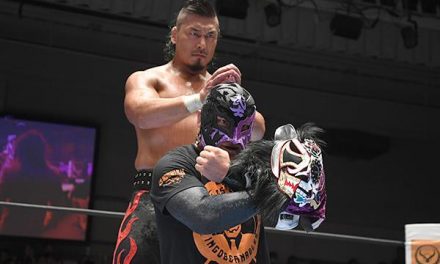