Welcome to the THIRD DAY of the Best of the Super Juniors~! It’s an exciting time for New Japan, as every match of this year’s tournament is being shown via NJPW World streaming. Day Three’s action didn’t air live, but you can catch it on demand at NJPW World by using the link above.

Due to Alex Shelley’s foot injury from the tour opener against David Finlay, he is no longer in the tournament. All of Alex Shelley’s opponents for the remainder of the tournament are being 2 points for a victory, so for your sake, I hope you didn’t predict Shelley to do well in this year’s tournament in the VOW Pick’ems. However, I know most of you did, as did I, so… well, it’s all for fun anyway, right?

Because Shelley wasn’t scheduled to have a tournament match on Night Three, we got a full order of four tournament matches on this event, which was seen live by 1,280 people in attendance. On NJPW World, we were treated to a single camera shoot with no live commentary.

Both men were coming into this match at 0-1, having lost their opening matches a few days earlier. Beretta, losing to Kyle O’Reilly in possibly the most competitive match of the opening night, and Owens, losing to Barbaro Cavernario, aren’t seen as contenders to make the finals, by any means. However, I did look to Beretta to have a very respectable record going into the final night. So it all starts here! Beretta got the win in just over ten minutes, finishing Owens off with the Sunset Driver. Beretta shines in tag team matches, but he’s more than solid as a singles competitor, as well. With no commentary, and only the one visual look, you really can tell when a match is getting over and when it might just be background fodder. Beretta vs Owens was captivating for the television viewer, and even more so live. This crowd got into Beretta’s near death experience and count out spots, reversals, and Beretta’s finisher. After re-debuting in NJPW with a lackluster crowd response, Beretta has really brought some fans onto his bandwagon. ***

As @voiceswrestling pointed out on Twitter after the match was uploaded, the video length here was only 11m28s. That includes the match, entrances, exits, and general downtime. The match only lasted 7:46, with Dorada getting the win after a top rope senton and leg-hook Michinoku Driver. It was pretty basic, and while the crowd loved Dorada’s brief flying antics, Finlay was almost a poor man’s version of Chase Owens from the previous match. He was a dick heel just to be a dick heel, which is similar to what Owens had done in the first BoSJ match of the night. I have no doubt Finlay will find himself as he develops, and a comparison to Owens is in no way true overall. However, he did remind me of him just a bit due to the close proximity of the match placement. This was Dorada’s first true win in the tournament, although he will also get the forfeit victory over Alex Shelley. Finlay remains winless, and it’s likely to stay that way. Finlay, of course, also lost to Shelley, which makes him likely to be the only wrestler in Block B to finish with 0 points. Which, might have been scenario most had suspected prior to the tournament, anyway. **1/2

In a bit of a surprise, at least for me, Tiger Mask got the win in just over nine minutes. Tiger picked up the victory with a crucifix cradle in the midst of a Fish barrage of punches and kicks, stunning the former IWGP Jr Tag champion. This was Tiger’s third win, technically, as he beat Nick Jackson on the first night and received a forfeit victory over Alex Shelley. Yet to face Finlay, it’s almost a given Tiger Mask will finish the BoSJ with a winning record and possibly be among the top half of the point getters in Block B. This was Fish’s first loss, and with his forfeit win over Alex Shelley, he has four points. Tiger has six. SIX POINTS! With Finlay still to come. That’s 8 points! Who knows, the guy will have KUSHIDA, Dorada, and Romero left.  It’s not impossible that he could finish with 10, although the 8 may be his ceiling. Never got into the match, although Fish was his usual great self. His temper tantrum after the flash loss was high quality. **

Liger and O’Reilly were both coming into this match at 1-0, having won their first matches on the BoSJ tour opener. O’Reilly defeated Beretta, while Liger unsurprisingly put down Yohei Komatsu. Liger was showing his veteran instincts all over the opening minutes of this match, locking in hold after hold on O’Reilly. Listening the the crowd build up as Liger slowly set up a surfboard hold was great fun, made more appreciated by the lack of commentary. Liger wouldn’t hold up long term, however, as O’Reilly controlled nearly the entire second half of the match without giving in. The finish sequence was great, with O’Reilly putting Liger down with a tornado DDT, brainbuster, and finally making him tap with an armbar. Liger was pissed. Dammit, this was supposed to be the year of his miraculous run! His frustrations dissipated quickly, at least for show, as O’Reilly and Liger shook hands, bowed, and Liger soaked up the appreciation of the crowd alone in the ring to end the final BoSJ tournament match on Night Three. *** 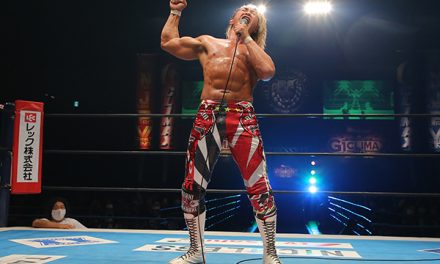 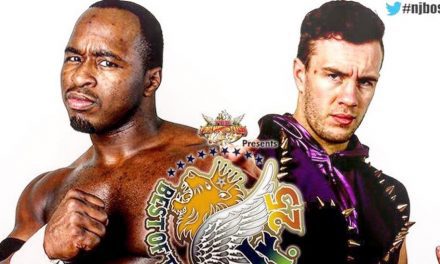