In a decision that is rather baffling Destination America decided against airing a new episode of Impact this week, in spite of there being an episode taped, edited and ready to go, instead opting to re-air Slammiversary 2014. However the rest of the world didn’t follow suit and as a result to the best of my knowledge this is the first ever episode of Impact not to air in the US. “The Pope” D’Angelo Dinero joined Josh Mathews on commentary for the show. He was perfectly fine.

Mark Andrews vs. Rockstar Spud vs. Crazy Steve vs. Argos vs. Manik vs. Tigre Uno – Elimination Match: Argos is a AAA wrestler. Uno started things fast with a dive before we had to endure some Crazy Steve comedy. The most frustrating thing about Steve is that you can see there’s a good wrestler buried under the clown nonsense. Argos hit a Springboard Moonsault followed by a Mark Andrews Shooting Star to the floor. That seems to have become his specialty. Andrews missed a Shooting Star and Manik caught him in a cradle for an elimination. Steve was pinned by Argos after a Gutbuster. Uno and Argos worked together for a while before Uno was eliminated by Manik during the commercial break. Spud pinned Argos after hitting the Underdog. Argos had a good showing here. Everything he did looked crisp. Spud fired up and went for the Underdog, Manik escaped and hit a double underhook into a Gutbuster for a nearfall. Manik tried the same move again but Spud rolled through for two. Spud hit the Underdog to pick up the win. This was a fun match. Spud cut another good promo later in the show vowing to beat Kenny King for the X-Division title. ***

Jessie Godderz vs. Zema Ion: They aired a video before the match recapping the history of The BroMans including their highlights as a team and their recent breakup. Jessie did a promo claiming Robbie E achieved nothing prior to the BroMans and that he carried the team. Zema refuted the claim pointing out that Jessie was Tara’s bitch prior to the BroMans. Zema came out hot but Jessie shut him down quickly. Despite a couple of hope spots Jessie dominated and won with a Boston Crab. Jessie has potential as a heel and Zema is still one of the most underused guys on the roster. *1/4

Magnus vs. Khoya: A video recapped Storm and Magnus’ recent issues. Magnus cut a promo before the match suggesting Khoya had a small penis and engaged in some Khoya wordplay (asking him not to be coy-a with him, a decent pun in fairness). Extended squash, Magnus won after a Michinoku Driver, a top rope elbow and two Spineshakers. On the plus side Khoya looked mildly competent here. *

Rebel vs. Marti Bell (w/ Jade): The Dollhouse asked Rebel to declare how superior they were to her before the match but she declined. The highlight of this was when Rebel got Marti in a headscissors and then thrust Marti’s face into her own bottom (a move which I described in my notes as “Ass Attack?”). Marti won with a straightjacket neckbreaker. *

TNA X-Division Championship – Mica vs. Kenny King©: King controlled early but Mica made a comeback punctuated by a throwing Samoan Drop for two. King hit a stun gun followed by the Royal Flush for the win. You never really know what you’re going to get with King. Sometimes he looks great, other times he’s all over the place. This didn’t really get enough time to go anywhere. **

Bram vs. Bobby Roode: Bram cut a promo earlier in the show claiming he hates absolutely everybody. Good to know. Roode outwrestled Bram early including a near fall off a Blockbuster but Bram took things out to the floor and took control after throwing Roode into the ringpost. Roode made a comeback including a front suplex and a spinebuster. Both men attempted to hit their finishers before Roode hit the Roode Bomb but Bram escaped defeat by rolling out to the floor. Roode bounced Bram around ringside and threw him into the post. The ref was distracted and Bram hit Roode with a low blow and rolled him up for the win. I’m still not convinced Bram has the goods in ring. **1/2

Final Thoughts: This was an extremely rare thing – a nonsense free Impact. This show was just guys and gals cutting promos and having matches buffered by video recaps of all the major stories. Was it a great show? Not even close. Should you watch it? Nope, outside of the opener. But it was a really refreshing change of pace from the usual fare, getting to see people who aren’t regularly featured on the show. Next week Impact returns in the US with May Mayhem, which includes match two in the Wolves/Aries and Roode Best of 5, Gail Kim vs. Taryn Terrell in a cage match with no build, Young vs. Angle for the World title in an I Quit match and an X-Division title Gauntlet match. 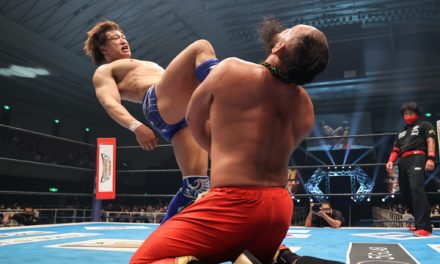