No Seth Rollins on this episode, which is disappointing, because I wanted to write 500 words about his new slim-fit tailored white shirt.

Chekhov’s Roman: Reigns opens the show and without the immediate stark comparison to Ambrose’s mic skills, he holds his own a little better, although as always, is a little awkward. He explains how much fun he had at Payback, and introduces his new gimmick, “punching little tiny security guards in the face”. Roman wants to be in the Money in the Bank match, so confidently invites himself into it. Ambrose arrives and is superlatively hyped about pretty much everything, but explains that he won’t need to be in the briefcase match himself because he’ll be champion by then, which Reigns takes surprisingly amicably, adding “I hope so” with a grin.

I’m interested in this uneasy friendship between Ambrose and Reigns. I like that most of the ambiguity seems to be coming from the Ambrose side, while Reigns remains a loyal puppy dog who really wants the best for Dean despite everything. Enduring friendships are one of my favourite things in wrestling, and I want these two to always be on speaking terms, forever, whatever happens in either of their individual paths.

Before we can bask in the Shield bro-out, Kane’s music hits and with a litany of Roman’s past failures in tow, insists that Reigns is NOT in the Money In the Bank match, which can pretty much guarantee that he definitely is. Ambrose throws some half-hearted sass back at the Corporate Demon which lands him being booked in a Wyatt rematch, while Reigns is chastised into taking the night off. Which guarantees he almost certainly will be reappearing later.

Lucha Dragons vs Los Matadores vs Tyson and Cesaro vs The Ascension: The Prime Time players are FREE from their pitch black purgatory room, and super ultimate megadad Titus O Neal has brought his beautiful bespectacled son to swing around and display to people! They jump on commentary with the entire New Day for a ridiculously cosy announce table.

After the requisite standing around booking matches and making sarcastic snipes, this was a snappy start to Smackdown, and this is the perfect placement for this sort of match, where it really stands out and doesn’t get lost in the melee of three hours. As impactful openers go, it wasn’t exactly Jack Evans vs Aerostar, but it felt fresh, and a lot of the men involved were wearing aesthetically pleasing pink and purple combos. It was very reminiscent of the tag team opener on the Wrestlemania kickoff, with Nattie and Torito tussling on the outside. Kalisto was a shining star in the melee here, apart from a touch of clumsiness in the finish, but I felt the match went too short to gain any momentum. However: it certainly got me even more interested in this elimination chamber tag match we’ve been promised, when I stop puzzling over how they’re going to tessellate the wrestlers in the pods. Kalisto got the pin with a hurricanrana.

King Barrett vs Dolph Ziggler: Lana wishes Dolph good luck before his match backstage, and Renee’s in a classic sleeveless little black dress with a diamante edging. Perfectly reasonable but nothing special: ***.

This whole Lana thing is infuriating. On Raw she said “I believe in you, I’ve always believed in you” to Rusev in a touchingly sincere way, and then in the face of rejection, her next political move is to kiss Ziggler. There have been times when Rusev felt more of an accessory for her, rather than vice versa, and now she’s reduced to jumping in the arms of the next man that comes along, a totally random choice which bears no resemblance to her previous interests or traits.

Alternatively, if we’re subscribing to the idea that Lana is romancing Dolph as a malicious form of revenge toward Rusev, then that’s even worse. Why does that have to be a personality trait of every single Diva, that they weaponize their sexuality?  And how dopey and short sighted does that make Dolph look? WWE has a terrible record for writing motivations of women, but here feels particularly stark.

I really believe that wrestling as a dramatic storytelling medium can be better than this.

The other way that I find this whole mess of a storyline personally irritating, is that every time I see Rusev and Dolph in the same place, it reminds me of the emphatic victory Dolph got over Rusev in NXT, back in his board-breaking days; in fact, the only televised defeat of Rusev until John Cena took him out. It’s such a cool and interesting little detail, that Dolph managed to get that win over him, and it irks me no end that it’s considered non-canonical and was never mentioned during Rusev’s dominant victory streak. Cole would even specifically say “no one has ever defeated Rusev in WWE or NXT,” and I would wince. I think it’s much more exciting (and respectful of your audience’s memory and intelligence) to create a compelling story around things that really happened rather than just retconning history every five minutes for whatever new story you’ve decided is true. That one defeat wouldn’t undermine Rusev’s character or dominance, it would just be a detail that added more depth and realism to him as a flawed human, possibly hiding insecurity.

HOWEVER, if you made it through all that rant, this match is pretty good! There’s some vicious suplexes and great heavy hitting action in this match, but it’s way too short. There’s an awkwardly placed ad break which doesn’t help things much, which drops you back right before a brief reversal sequence and the finish. Ziggler gets the pin with the Zigzag.

Divas Disagreement: Paige is back, with her accent more oddly transatlantic than ever. She drops some casual misogyny, calls Tamina a man, and identifies her house again. Naomi and Tamina (do they have a tag team name yet? Even a cute fan one?) come out, and there are some minutes of painful back and forth banter which isn’t really worth recapping. The Samoan Sisters-in-law or whatever climb into the ring and initiate a beatdown and I remain fascinated by Naomi wearing her cool stompy light-change sneakers with street clothes.

I hope you didn’t keep the topic of inconsistent and nonsensical motivations for women far from your mind, because it becomes relevant again when Nikki Bella emerges to make the save for Paige, only days after Paige unceremoniously attacked Nikki on Raw and held her belt aloft. She hits a Rack Attack on Paige for good measure, though.

R-Truth vs Stardust: This is sort of a nothing match, like you’d expect. There are some rest holds. It goes about three minutes. R Truth gets the pin.

The Meta Powers vs Heath Slater and Adam Rose: Curtis Axel and Damien Mandow make me feel hypocritical, because I would think it was an endlessly charming act if it happened somewhere like PWG, but in WWE leaves me cold. I’m not sure whether it’s because the mannerisms are just too lazy to mark out for, or whether it just feels like self-congratulatory nonsense rather than a genuine celebration of entertainment we enjoyed as children. Then again, who’s we? A significant demographic of the target audience won’t have memories of either of these men.

Heath Slater is the most fun in this match, because he’s taking it extremely seriously, and seems to genuinely believe in the newfound dark magic powers of Axel and Sandow. He’s pretty much always fun to watch, maybe because we don’t get a chance to get sick of him. Curtis Axel hits the Axelmania Leg Drop for the win, then there’s an extended pose-off which filled me with such second hand embarrassment I physically had to turn away.

Dean Ambrose vs Bray Wyatt: The babyface who gets championship matches through threats of violence, notorious line jumper Dean Ambrose, faces off against the Eater of Worlds.

Strange Smackdown obsessives might recall that Bray and Dean had a Smackdown main event about this time last year, two weeks after the Shield broke up, and it was very very good. It was in that match that Dean suffered a gruesome kayfabe arm injury that he sold for weeks afterward, and which played a pivotal role in the Money In the Bank briefcase match some time later. It seemed to capture the spirit of the ferocious chemistry between the two men from their previous six-man encounters, before the bizarre and misguided series of matches they ended up stuck in together throughout the autumn and winter.

Of course, in this instance, it’s just a rematch of a not particularly good Raw mid-card match, because that’s what we get stuck with sometimes. It’s worth a watch though. There’s that fun moment where Ambrose goes for that running crossbody that would knock most people flat on their back, and Bray just sorts of puffs out his chest and lets him comically bounce off him. I like the idea that Bray can just casually break wrestling moves. He can choose if they work or not. People have got to stop throwing Dean behind them toward the apron and then turning their back though. They repeat a lot of the stuff from Raw and there’s nothing boldly innovative.

As a match to make Dean seem like a fearsome, or even credible competitor in the championship match at Elimination Chamber, this missed wildly. JJ security appear sooner than you’d imagine, considering they don’t really even have any stakes in this match, and Roman arrives, presumably after clearing catering out of cheesecake, to practice his new self proclaimed gimmick of throwing unnecessarily dramatic punches to tiny security guys. Heavy interference allowed for an Ambrose win, and the show ends with Roman smiling avuncularly up to Dean in the ring.

Final Thoughts: This show was a Roman Reigns sandwich with some unexpected bright spots in between, but a sharp drop off in quality in the second half. Interactions between Shield members remain a highlight even almost a year after their dissolution. 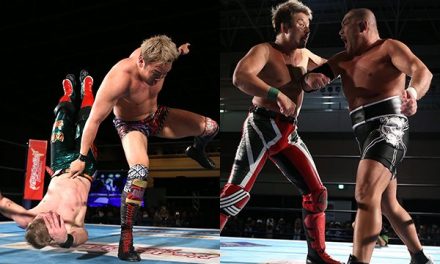