We certainly have one hell of a main event on tap for tonight’s show. The Crew get their final crack at the inaugural trios champs Ivelisse/Son of Havoc/Angelico in a Ladder match with the titles suspended above the ring. Here’s hoping that Angelico doesn’t try something suicidal again, but I’m sure he will. Remember, Dario threatened to feed The Crew to his caged up brother if they don’t get the job done this time.

Marty “The Moth” Martinez vs. Prince Puma: He’s BAAAAACK. Crazy mothman himself Marty, who had just gotten kicked out of the temple unceremoniously weeks prior trying to be a wrestling member of the temple, is standing behind Melissa Santos as she announces him in his debut match in LU. He’s sniffing her hair and being just a total creep. Very flattering. Can poor Melissa just be left alone by these maniacs week after week? He’s wearing that ridiculous AZTEC PRIDE shirt again as well. What an introduction for Moth as he’s facing THE champ, Puma.

Moth embraced Puma as the bell rang and requested to have the cameramen take pictures of them together, but then proceeded to absolutely take Puma’s head off with a lariat. Marty just legit looks crazy and you can absolutely buy his character being an absolute looney toon with his facials and emotion during this. Marty controlled for awhile because of his cheap shot, but Puma recovered and got on a roll. Around this time, they show a shot of the boarded up broken window of Dario’s office; this window was shattered along with Alberto El Patron’s title match dreams when Johnny Mundo interfered in his #1 contender’s match with Hernandez and threw El Patron right through that window. Anyway, Marty was able to regain the advantage here. He went up to the top rope for a moonsault but the lunatic spent way too much time basking in his TV glory, and Puma moved when he finally did go for the moonsault. Puma finished him off with the 630 splash. Nice to see Marty get some legitimate offense in against the champ in his debut, I really enjoy his over the top character and he adds some stiff offense to complement it. **1/4

Out comes Hernandez. Konnan says he figured out Hernandez wasn’t his boy, he was just a sorry SOB. He even called him “baby nuts” for crying out loud. He wanted Hernandez to come down there and face Puma right now, but Hernandez wasn’t having it right now. His own terms, you know. We are apparently going to hear Mundo’s thoughts on why he did what he did to Alberto last week next!

Vampiro sits down with Mundo. Johnny said he’s come here to prove he’s the best. No one else there is as good as him. Vampiro doesn’t like that answer though, and said he didn’t really answer the question of why he stuck Alberto’s face through the window. Johnny says he made a statement to make Alberto notice him. Vampiro pushes the narrative that Mundo got jealous of Alberto coming in and stealing the spotlight. Mundo called him overpaid, overconfident and overrated and that he wanted Alberto to know he wasn’t some dude in catering to slap around (It’s so funny that he keeps referring to THAT incident). Mundo basically ended this by saying the temple is HIS world, but you already knew that with the Alberto eye wink. Damn, I’ve never enjoyed Johnny’s interview by any means but he killed it in this segment. He’s by far a better heel promo.

Dario is talking to The Crew, hyping them up for the main event tonight. He said them winning the titles is the equivalent to sacrificing the dysfunctional trios champs. But if they don’t sacrifice them, the gods will be angry and Dario will have no choice but to sacrifice The Crew. Chilling consequences for them.

Delavar Daivari vs. Texano Jr: The last time they met, the match got thrown out rather quickly and the two brawled with each other. This wasn’t much once again, they’re really not reeling me in with this feud at all and I don’t think the crowd is too sold on it either. They had some decent back and forth but it was nothing memorable. This ended in a DQ once again when Big Ryck came out and clotheslined Texano on the apron. **1/4

Looks like rich boy Daivari paid off Ryck to help him demolish Texano. This was alluded to last week as Ryck even told Mack that money was way more important to him than family. In a really funny moment, after they beat up Texano, Daivari grabs his drink and has Ryck force the ref to count as Daivari sits on Texano even though the match was already thrown out. I’ll give this feud a chance though, as I was not a huge fan of the whole Ivelisse/Angelico/Son of Havoc stuff at first and look how that turned out.

The bell might have rung, but that won't stop Daivari from ringing Texano's bell. #Luchaunderground pic.twitter.com/pS4oNV5cgS

Dario is in his office. Catrina sneaks up on him, and tells him he knew that Mil couldn’t be stopped when he let him in the temple. Catrina told him to let Mil make Fenix the sacrifice that Dario needs to please the gods. She tells him that it must be a deathmatch next week. Whoa, as if their amazing Grave Consequences match wasn’t violent enough, this match next week is going to be horrifying. Dario’s freaked out but also extremely pleased because violence is his middle name.

The mystery girl finally has left Dragon Azteca’s place to go kill Dario’s brother and avenge her dead parents. Chavo Guerrero shows up at Dragon’s doorstep and tells Dragon he’ll need his help to keep her alive. Guess that means more Chavo again, Chavo sits with him and goes over the history both of their families have had together and Dragon calls the Guerreros liars and cheaters. Chavo agrees, but he also says his family is in danger (because of his previous attack on Blue Demon I suppose) so in exchange of helping the girl stay safe, Dragon clears Chavo’s name. They agree to this deal.

Lucha Underground Trios Championship Ladder Match – Ivelisse/Son of Havoc/Angelico (c) vs. The Crew: Cisco wastes absolutely no time as he rushes up the stairs as the champs enter (Important to note that Ivelisse is still on crutches) and jumps them. The Crew makes this their match style as they beat the tar out of the champs around the outside of the temple. Ivelisse can’t do a lot to help because of her injury, but she hobbles down the stairs to try. The Crew even choke Ivelisse with her own crutch. Bael and Castro held a ladder together outside, Cisco whipped Angelico into the ropes and he flipped over to the outside, crushing Bael and Castro under the ladder but busting his butt in the process. Havoc tried bringing a ladder to the same spot, but Cisco dropkicked the ladder into him through the ropes.

This match just ended up being completely crazy. There were so many fun moments in this: Cisco removing the boards from Dario’s broken window only to end up tipped into the office from a ladder by Angelico, Angelico teasing another crazy jump spot from the top of Dario’s office only to get wacked by Castro with a kendo stick several times, Cisco diving back out through Cueto’s window into Havoc, Havoc getting tipped off the ladder but landing right on the second rope into a perfect lionsault, you name it.

Havoc actually went for a shooting star press to Bael on the table, but Havoc totally messed up judging the distance and nailed his head/chest right on the edge of the table and didn’t break it at all. Ouch! Castro takes advantage of the screw up and positions the ladder under the belts. So yeah, remember how I said hopefully Angelico doesn’t try something suicidal again? Well of course he did anyway. In another spot of the year contender, Angelico somehow is able to jump all the way from the balcony and dropkick Castro off the ladder, confirming that white dudes wearing backwards caps and motorcross pants will do anything. Truly amazing spot you have to see to believe, the guy has springs in his shoes. The badass Ivelisse on one leg eventually makes her way in there to climb the ladder! She’s met at the top by Cisco, but she uses her mouth to BITE Cisco’s hand to stop him from climbing and she’s able to reach the belts to retain the titles for her dysfunctional band of misfits! This was a load of fun once again, maybe not quite the saga that it was initially winning the belts as this didn’t feature as much good wrestling, but the storytelling and all the brawling fit in perfectly here. The Crew work that style so well.  The crazy trio continue to keep on trucking to Dario’s complete dismay as he looks disgusted in his office. They continue to be more and more fun to watch each week. ***3/4

Final Thoughts: The undercard of this show wasn’t anything special, although it was neat to see Marty The Moth debut against the champ and develop his character more. I’m still waiting for a reason to really care about this Daivari/Texano feud as well. I also really enjoyed Mundo’s heel interview with Vampiro on why he threw Alberto threw Cueto’s office. The main event delivered though in another chaotic brawl spot style of match that fit both teams perfectly. Angelico continues to absolutely kill himself out there to entertain us all and it certainly does not go unnoticed by me and many others. We now know Chavo will be back and trying to protect Black Lotus (mystery girl) as she goes to the temple to eliminate Dario’s brother so this should end up developing more through the weeks.

Next week should be a doozy, as  we get to see the rematch we’ve been waiting for in Mil Muertes/Fenix II. They put on a MOTY candidate in Grave Consequences, let’s see if next week’s deathmatch is anywhere near that level.

AEW ALL OUT (August 31) Results & Review 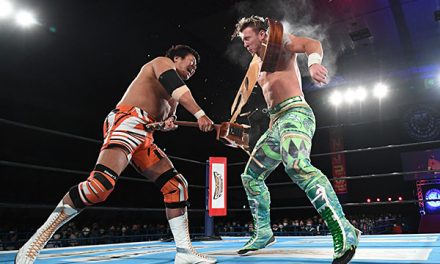