After a killer match between Ospreay and Sydal last episode, this one has a lot to live up to. It’s main evented by the relatively inexperienced James Castle taking on the veteran Doug Williams, in a match that’s had a month or two build behind it.

The show kicked off with a short promo from James Castle, talking about how he was going to show Doug Williams what being called an anarchist really means. It wasn’t exactly a good promo, but it was fine, especially for somebody so inexperienced in the industry.

Lord Gideon Grey vs. Ronnie Evans: Gideon Grey’s opponent gets a jobber entrance while Grey runs through his general shtick, which it should be noted he’s pretty terrific at, running down the crowd and complaining about Matt Classic and Colt Cabana being one and the same. He then runs down jobber Ronnie Evans, saying he isn’t worthy of facing him, and again replaces himself in the match with Psycho Phillips in a carbon copy of what happened two weeks ago.

Psycho Phillips vs. Ronnie Evans: Evans got a smidgen of unimpressive looking offense, before getting summarily squashed Psycho Phillips, both metaphorically and literally with a couple of sentons, before eventually taking him out with a chokeslam. Evans looked incredibly green while Phillips looked good, it’s clear to see why he’s the rookie getting the spotlighted role out of the two. SQUASH

Next up we get a sit-down interview in a similar style to the Michael Cole sit-down interviews with Owens and Zayn recently on NXT, with Andy Quildan interviewing Marty Scurll. Marty talked about how he feels disrespected as the champion having to repeatedly accept second billing to foreign stars.

The content here was really great. Marty Scurll is one of the few people of the UK scene who can really talk comfortably and at length, and the gulf in class between him and most of the rest of the roster really showed here. It helped that what he was saying was entirely logical for his character, and may also have had a root or two in the truth. Marty came off really well here, and he did a good job of hyping up his match with Styles.

Now on the flip side, the production of this segment was pretty atrocious. It was shot with two camera angles, and the main one was completely out of focus. On top of that, the two guys had been badly green-screened onto a black background, and it looked terrible. All in all the production on this piece looked incredibly amateur, which is in stark contrast to how the production on the rest of the show looked. It definitely brought down a very good segment.

James Castle vs. Doug Williams: The battle of the Anarchists, although the nickname of the Anarchist never really fitted Williams, who has practically played a gentleman his entire career. This match was pretty boring for about the first five minutes, being a very basic and plodding affair. It picked up a fair bit for the finish though, with both guys hitting some dynamic offense in the closing few minutes.

The finish itself was a highlight, with it being a call-back to Williams’ match with Scurll on the first episode of the show, where Scurll countered a Chaos Theory rolling German suplex in a victory roll for the victory. Castle tried the same thing as his mentor had done here, but Doug wasn’t about to be beaten by the same trick twice and sat down midway through, grabbing the quick pinfall for himself. This callback really brought the match up a peg for me, and the way the commentary team brought it forward made it all the better. Other than that though, this match was pretty bland. ***

As an aside, after talking to several people about last week’s terrific match between Sydal and Ospreay, I found a couple of people had problems with the amount of camera cuts that occurred, causing motion sickness. I personally didn’t have any problem with it, but I’d be curious to know what you guys think and if you noticed any problems with the camera cuts. You can talk with me about it on Twitter: @R_Double_1997. 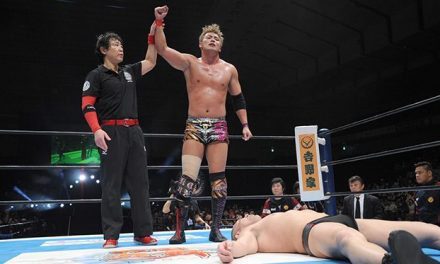