Last week finally featured the payoff to the Knights of the Rising Dawn angle. And boy was I wrong on its value as an angle. I had very little interest in it all along. But it turned out to be fun to watch The Addiction win the ROH World Tag Team Championships and complete a heel turn. Ultimately, I thought the angle was satisfying because ROH successfully told the story that The Addiction no longer have what it takes to compete with the top tag teams in the company on a level playing field. As a result, they had to think outside the box and come up with a new strategy to find success. That’s a simple, linear story that works for me.

This week’s episode opens with Kevin Kelly and Steve Corino promising a main event of Jay Lethal versus Tommaso Ciampa for the ROH World Television Championship. But first, Michael Elgin is out first to lead Killer Elite Squad to the ring.

Killer Elite Squad (Lance Archer & Davey Boy Smith, Jr.) vs. War Machine (Ray Row & Hanson):  This is a continuation of Elgin’s feud with War Machine. He has brought in KES to take out War Machine on his behalf. Thankfully, Kelly tells us, Michael Elgin was able to get a manager’s licensed FedExed to him at the arena today just in time for this match! Both teams take a turn on offense for the first couple of minutes of this match before KES takes control by isolating Hanson. Since Hanson has been treated very well in ROH, this does a great job of making KES seem impressive in their ROH debut.

Kelly & Corino play up that War Machine assisted Elgin in winning the ROH World Championship by helping to keep The Kingdom from interfering in Elgin’s match with Adam Cole. That is a pretty good callback to something that happened awhile back but adds some juice to this feud. I hope they put more focus on that as this program progresses.

After building up quite a bit of heat, Hanson is finally able to create enough space to tag in Rowe to clean house. Rowe and Hanson are able to set up Archer and hit Fallout but Elgin pulls the referee out of the ring just before he can make the three-count.  Hanson dives through the ropes to take out Elgin.

When Hanson gets back in the ring, all four men are in there and trading moves. And just as I’m really beginning to enjoy this match, the referee calls for the bell? Corino says the match has been declared a no contest but no real explanation is ever given. Elgin jumps into the ring and everyone brawls into commercial. ***

This match was a lot of fun. But the finish was completely nonsensical. Since when are tag team matches in Ring of Honor (or any promotion) stopped when everyone ends up in the ring swapping offense? If NOAH didn’t want their champions taking the fall here, that’s understandable, but then why do the match at all? It doesn’t really do much to heat up this Elgin/War Machine program.

Coming out of commercial, we are treated to a recap of The Addiction’s win over ReDRagon from last week’s episode, along with the outing of Daniels, Kazarian, and Chris Sabin as the Knights of the Rising Dawn.

ROH World Television Championship Match – Jay Lethal (c) (with Truth Martini and Donovan Dijak) vs. Tommaso Ciampa: Corino wonders where Jay Diesel is so I assume he will later play a part in this match.  Of course, the match begins with Ciampa gaining the advantage. Lethal really sells Ciampa’s offense well. However, Ciampa distracts himself as he starts messing with Truth Martini on the outside. Lethal takes advantage of Ciampa’s mistake and hits Ciampa with three straight dives. The third one knocks Ciampa into the crowd and Lethal is in control.

Lethal takes the opportunity to audition for NXT as he locks in a couple of patented WWE Heel Chin Locks. Ciampa fights out of the second one and resumes punishing Lethal with strikes. But yes, Ciampa takes a selfie with a fan, which allows Lethal is able to recover. This is wrestling clap clap clapclapclap.

With that, we reach the portion of the match where Lethal and Ciampa trade offense and near-falls. There is a really great counter with Lethal hitting the Lethal Combination but Ciampa turns it into the Sicilian Stretch. However, Lethal is able to get a foot on the bottom rope just in time. We take a quick break and when we come back, Martini is holding Ciampa’s leg so Lethal can get a pin. Ciampa kicks out and goes to the outside to confront Martini. He ends up chasing Dijak, which sets up an opportunity for Lethal to hit a dive. But Ciampa catches him and slams him to the ground. Back inside the ring, Ciampa hits an over the shoulder belly-to-back piledriver off the top rope and goes for the pin. For the second time on this episode, the ref is pulled out just before the count of three. Dijak comes in and lays out Ciampa and Lethal goes for the pin. But Ciampa kicks out at 2 and 9/10.

Lethal and Ciampa go back to trading moves and near-falls before Dijak tries to come back in the ring. This latest interference leads the ref to send Dijak and Martini to the back. But while the ref is trying to enforce that ruling, Lethal hits a low blow. He follows that up with a Lethal Injection and is finally able to get the pinfall. ***1/2

This is allegedly Ciampa’s last ROH match so he gets an ovation and a streamer bath. He shakes hands with referee Todd Sinclair but then attacks him. Ciampa then hits Sinclair with a number of running knee strikes before exiting the ring to a “Please Don’t Go” chant. I suppose this is how ROH writes off Ciampa, with Nigel McGuinness saying this was the last straw with Ciampa.

There were parts of this match I really liked but I kinda hated it overall. Lethal and Ciampa’s work deserved better than all the goofiness that was included. And while I appreciate that Lethal is the cocky heel who uses his buddies when he gets in trouble, I don’t see anything wrong with him going over strong on a guy who is supposedly leaving the company. That is especially true when Lethal has a match coming up against World Champion Jay Briscoe. Jay Diesel never did get involved so I’m not sure Corino drew such attention to his absence.

Final Thoughts: Overall, this was a good show that featured overbooked in-ring action. I would have recommended both of these matches had they not featured such silly finishes. Still, the Lethal/Ciampa match is worth watching. In between shenanigans, there is some really good, if formulaic, work. There wasn’t much story advancement to speak of this week but I am interested in how the Elgin/War Machine program progresses. Unless you’re particularly interested in Lethal/Ciampa, you can skip this episode without missing much of anything. Bech back next week, however, as that episode should feature some pretty excellent wrestling as Alberto El Patron returns to ROH to team with ACH and Matt Sydal against the Briscoes and Roderick Strong. 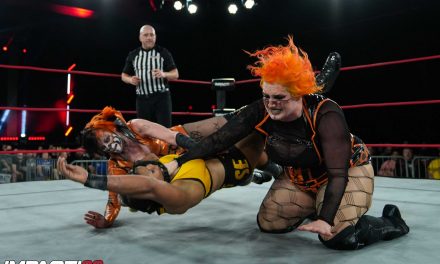