The Revolution (Manik, Abyss and Khoya) vs. The Hardys and Davey Richards – Street Fight: This show was Hardcore Justice so all the matches have some kind of stipulation. Traditionally Hardcore Justice is in August but I suppose they wanted to go old school (the first Hard Justice show was in May 2005, a show where AJ Styles ended Jeff Jarrett’s near yearlong NWA title run only to drop the title to Raven the next month). They started brawling on the ramp right out of the gate. Al Snow joined Josh Mathews on commentary. Davey hit a very long delayed vertical suplex on Manik. Matt hit Manik with the Twist of Fate and Jeff went up top for the Swanton but Manik cut him off and The Revolution took over.

Matt battled back with a steel chair. We had the obligatory Tower of Doom spot. I must admit I do always like a good Tower of Doom spot. Abyss went for a chokeslam on Davey but Davey flipped out, dropkicked Abyss to his knees, hit Creeping Death and then took out Abyss with a dive. Jeff nailed Khoya with a slingshot crossbody, Matt hit Manik with a Side Effect, Davey followed with a double footstomp but Abyss broke up the pin by lifting Richards into a chokeslam. Twist of Fate on Abyss by Matt followed by a Swanton gave Richards and The Hardys the win. A fun brawl. Storm gave out to Abyss after the match. ***

They showed some of the media outlets which reported on Billy Corgan joining TNA. Next week is the first show with his input and I‘ll give him the benefit of the doubt, though I dread the idea of wrestling dealing with issues of race, sexual orientation and gender. Anderson came to the ring and talked about wanting to beat up EC3. If they don’t shoot stuff with EC3 canvassing people (even if it’s just wandering around Universal Studios) then this whole thing will be for nothing. Also some attack ads against Anderson would be great. EC3 interrupted Anderson. I know it’s been said before but it’s amazing how WWE managed to drop the ball on EC3. He looks great, he can talk and he can work. He seems like everything they’d want. Anderson revealed his own campaign to defeat EC3’s streak. Anderson will face EC3 next week with the fans choosing the stipulation: arm wrestling match or Falls Count Anywhere.

TNA X-Division Championship – Mark Andrews vs. Kenny King vs. Tigre Uno vs. Rockstar Spud© – Ladder Match: Let’s play a game of “When was the last time any of the challengers won a singles match?” (not including One Night Only’s because TNA pretty much pretend they don’t exist). Kenny King was February 28th, 2013 when he beat RVD for the X-Division title, Uno was March 15th, 2014 over Sanada (which qualifies him most for this title match) and Mark Andrews has never had a singles match in TNA outside of the British Bootcamp stuff. Maybe they’re following Spud’s lead whose last singles match victory prior to winning the title was January 26th, 2013 over Robbie E. What I’m saying in a roundabout way is TNA have essentially abandoned the X-Division lately.

Uno took out King with a big dive. Andrews hit a Shooting Star off the top to the floor. I really like Andrews. Andrews and King fought over the ladder but Uno took them out with it instead. Andrews sprung off a ladder into a tornado DDT on King. Uno hit a Spanish Fly on Andrews off a ladder. Give me a fifteen minutes Andrews/Uno match please. Spud and King climbed the ladder together, King knocked Spud down but Uno spingboarded onto the ladder. King hiptossed Uno off the ladder but Spud climbed back up and knocked King down. As Spud was about to win Homicide ran out, pulled Spud off the ladder onto another ladder allowing King to get the belt and win the title. I’d have preferred somebody like Andrews to win as he’s better equipped to rejuvenate the division plus it would keep the X-Division away from endless Beatdown Clan (BDC) nonsense. This was lots of fun for the time it got though. Spud did a really good promo later in the show about how the X-Division title meant he was among greats like Joe, Aries, Lynn, Styles, Daniels and Kazarian, how the BDC just took that away from him and Spud vowed to get the title back. Spud is great. ***1/4

Eric Young brought a stretcher out on the ramp. Young gloated about what he did to Angle and Aries last week. Young said he saw the main event (a non-title Stretcher match vs. Kurt Angle) as an opportunity to end Angle’s career. I’m not sure after all these years Young is going to gain any real traction as a main event heel but you can’t fault their effort.

TNA Knockouts Championship – Brooke vs. Taryn Terrell© w/ The Dollhouse (Jade and Marti Bell): Taryn rubbed Brooke’s face into the mat which prompted Snow to comment that the mat is like sandpaper (simply attempting to get over the move), for some reason this drew a tirade from Mathews about how the ring isn’t actually like sandpaper. Brooke hit a middle rope facebuster and looked to hit Asstastic but The Dollhouse pulled Taryn to the floor. Brooke took out The Dollhouse hit a top rope crossbody. Brooke hit a flapjack, went up top but Jade pushed her off and Taryn hit the Taryn Cutter for the win. The Dollhouse has different entrance and exit music which is strange. Brooke always looks good when she’s given a chance. **1/4

The Dollhouse laid out Brooke after the match and Taryn said nobody can beat her. This drew out Gail Kim. Terrell was sick of living in Gail’s shadow. Taryn said she had her new partners and Gail was all alone. Gail wasn’t alone though. Awesome Kong came out. The idea of Kong and Kim teaming together after all these years to combat The Dollhouse could be lots of fun.

Drew Galloway vs. Low Ki – Pipe on a Pole: Drew had some of the fans in the front row hold Low Ki so he could chop him. Low Ki used a chair, because there are no DQ’s. If there are no DQ’s why really bother with the pipe? Galloway suplexed Low Ki on the apron and climbed for the pipe but Low Ki cut him off.  Low Ki hit a Warriors Way onto Galloway who was draped over a standing chair. That didn’t look pleasant. Both men fought over the pipe but it fell. Low Ki looked for Warriors Way in the corner but Galloway countered with a belly to belly.

Galloway grabbed the pipe but Low Ki kicked him and took the pipe for himself. Galloway ducked the pipe shot and hit the Future Shock on a chair for the win. They did the same finish in the Galloway/King One Night Only match where they just didn’t use the pipe at all and apparently they thought that was so good they should do it again. This would’ve been much better off as a straight up match. The BDC attacked after the bell, The Rising evened the numbers and everybody brawled for a while. **1/4

Last week Magnus asked a camera crew to follow Mickie, so this week we caught up with Mickie with her son Donovan going shopping. She ran into James Storm who wanted to hold Donovan and Mickie let him. Magnus was in the ring afterwards and was understandably upset over Storm stalking his wife and holding his child. Storm came out before Magnus could get a word out. Magnus said he sees through Storm’s manipulation act and that he’s not going to let Storm drive a wedge between himself and Mickie. Storm questioned Magnus’ manhood and suggested asking a camera man to follow his wife suggested trust issues. Storm said he’s known Mickie for a looooong time and questioned why Mickie didn’t tell Magnus about running into Storm in while shopping.  Storm left Magnus to think about that. This is the kind of James Storm I can get behind. Not the growly, trying too hard James Storm we’ve had for the last year or so but rather slimy, conniving, manipulative and just enough charm to tie the whole package together. Storm was tremendous here.

Kurt Angle vs. Eric Young – Stretcher Match: The rules are you have to put your opponent onto the stretcher and strap him in to win. No pushing over a line stuff. Angle bounced EY around the rails and steps at ringside. Young threw Angle into the post. Angle still commits to the shoulder to the post spot like nobody else. EY walked into a belly to belly and bailed to the floor. Angle jumped off the ring apron but Young punched him in the gut. Young retrieved the stretcher but that gave Angle time to recover. Angle looked for a German off the apron but EY escaped. EY moved his shin guard (with the Figure Four as Young’s new submission move he’s doing a gimmicked shin guard thing) and went for a leg lariat but Angle ducked.

Young attempted a floatover in the corner simply exposed himself to an opportunity for rolling German suplexes. As EY was trying to escape a German he pulled off the turnbuckle pad. Young rolled out to the floor while still in the grasp of Angle and hit a low blow to escape. Young looked for a Piledriver on the floor but Angle flung him into the post and hit an Angle Slam on the floor instead. Angle placed Young on the stretcher but couldn’t strap Young in. Young tried for a Piledriver but Angle countered into an Ankle Lock. Young rolled through sending Angle into the exposed turnbuckle and followed with a Piledriver. Young hit a second Piledriver and strapped Angle into the stretcher for the win. Thankfully this was predominantly a stretcher adjacent match (because Stretcher matches are rarely that good) and it was better off for it. They suggested Young has earned a title shot with this victory. ***1/4

Final Thoughts: This was a good show. Some good wrestling, the Storm/Magnus/Mickie stuff is a well-crafted story where all three characters motivations feel natural and Storm is hitting on an iteration of his current character that actually works. Spud is great, EC3 is great, Kong and Kim teaming should be fun, and they’re doing as good a job as you could do trying to establish Young as top flight heel. Snow was a little rigid on commentary but eased as the show progressed and should be fine in the future. It’ll be interesting to see what Billy Corgan brings to the table going forward. 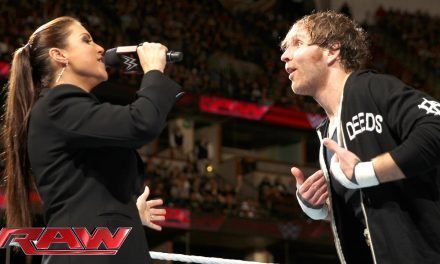