No Fans? No Problem: The History of Empty Arena Matches

History will be made later today when the Baltimore Orioles and Chicago White Sox play the first-ever Major League Baseball game with no fans — nobody, nada. Amid the violent protests plaguing the city of Baltimore this week and due to the increasingly hostile conditions outside of the stadium the Orioles and White Sox previously scheduled games (Monday and Tuesday) were cancelled.  The dilemma for MLB and the Orioles were the cancellation of an entire series, adding scheduling issues to an already super-tight MLB schedule.

The solution? A proposal from the Baltimore Orioles to continue playing Wednesday’s game but close it off to the public — only players, umpires, team officials and the media would be present.

An empty stadium game will a first for Major League Baseball and major American team sports. Closed door games have taken place in international soccer including earlier this April when the Russian Premiere League ordered Torpedo Moscow to play two games in an empty stadium after fans displayed a Nazi banner.

A measles outbreak at Siena College forced their 1989 basketball team to play nine games without fans.

Of course, being the good wrestling fan you are, you know empty stadium events aren’t unprecedented in the world of professional wrestling. In fact, four (update: FIVE!) such matches have occurred. The first empty arena match saw Jerry Lawler and then-NWA World Heavyweight Champion Terry Funk battle in the empty Mid South Coliseum.

The empty arena match was a culmination of long feud between The Funkster and The King of Memphis Jerry Lawler. When Lawler returned to Memphis after a broken leg, he was a newly-crowned babyface going up against former manager Jimmy Hart. While Lawler was hurt, Hart dogged his former client, turning on him and calling him a “horse that needed to be put out to pasture.” Upon Lawler’s return, Hart put up bounties for the territory’s heels to take out Lawler. One of Hart’s most famous bounty hunters was Terry Funk, a man Lawler feuded with throughout the late 70s.

The rivalry appeared to culminate in a bloody match which saw Lawler win via countout but Funk returned to Memphis TV a few weeks later to challenge Lawler to a fight. Not just any fight though, Funk wanted to fight Jerry Lawler in an empty Mid South Coliseum:

It was on — Lawler vs. Funk, with nobody there but the cameras and Lance Russell. It’s a fascinating match with the pre-match commentary from a chain smoking Russell not sure if either man is going to show up. The eventually do show up but the whole thing is bizarre (in a good way). The whole production approach to this match is so far ahead of its time and really tries to paint the picture that this isn’t some goofy match stipulation but Terry Funk really being a nutcase and wanting to do everything in his power to get his hands on Lawler. It’s really cool.

As you can imagine, this wasn’t a very technical match. Almost immediately the action spills to the outside as Funk tosses Lawler into chairs, piledrives him onto the floor and generally beats the hell out of Lawler. Watch this for the spectacle because the match isn’t very good. Funk tries to stab Lawler’s eye but The King kicks Funk’s arm and the object goes into Funk’s eye. Funk immediately falls to the canvas and starts screaming about his eye. That was it. It wasn’t a great match but it really shouldn’t have been, this was all about the idea of two dudes wrestling in front of, well, nobody and it’s definitely a sight to see.

Terry Funk was quite fond of this stipulation as a year later he took the empty arena concept with him to Championship Wrestling From Florida. However, in pure Terry Funk fashion, a standard Empty Arena match won’t do anymore, oh no, instead we got a Texas Bunkhouse Empty Arena Cage Match with Funk taking on Bruce Walkup.

This match is light years better than Lawler and Funk though you could make the case it wasn’t as much a match as the total destruction of a man as Funk decimates Walkup. The key to this match is the post-match promo from Terry Funk. My words can’t even do it justice, go watch it… Funk is so, so, so good.

It wasn’t until 1999 that the empty arena concept was dusted off against by a major promotion as WWE presented a World Title match between Mankind (who had just lost the belt at the Royal Rumble) and current champion The Rock. This is the most famous Empty Arena match and for good reason, WWE was so hot at the time, USA gave them a timeslot during Halftime of Super Bowl XXXIII (Denver Broncos vs. Atlanta Falcons). Thus, Halftime Heat (WWE had a show Sunday Night Heat at the time) was born. The event was a monumental success scoring a 6.6 rating. This is probably the best Empty Arena match ever, a pure plunder match from the opening bell. One of the more compelling aspects of the match is the one-man commentary provided by, Mr. McMahon?! Yes, the man who stepped away from the announcers table in late 1997 to become the biggest heel in wrestling was back on the mic.

McMahon sided with his Corporate champion throughout the match adding a fun dynamic as Mankind and The Rock brawled literally all over the arena: catering, someone’s office, every hallway and seemingly every nook & cranny of the Tucson Convention Center. As the action spills into the kitchen, The Rock throws Mankind into an oven, hits him in the head with popcorn and fruit among other things. It’s funny, these two are really in the “arena” for a few minutes before fighting backstage for the remainder of the match. Either way, it’s a true joy to watch.

Most of you probably remember the finish here. Mankind commandeers a forklift and pins The Rock underneath a stack of pallets. Mankind is your new champion (remember this is 1999, Russo-booked WWF) and the final empty arena match is over…

OR IS IT! I’ll be honest, I had no idea this existed but some research uncovered the most recent empty arena match in a promotion that has teetered on having unintended empty arena TV tapings — Total Nonstop Action!

Yes in 2009, Sting and Kurt Angle had an Empty Arena match. If you weren’t watching TNA at the time, we were smack-dab in the middle of the Main Event Mafia-era. The mafia consistenting almost exclusively of ex-WWE/WCW talents aimed to take over the company, win all their titles and as the name suggests, be in all the main events. Sting and Kurt Angle were both charter members of the stable but ending up having a falling out, leading for some reason to an empty arena match.

No referee for this one as it’s a pure brawl. At one point early in the match Sting yells “I’M GOING TO KILL YOU!” Yeah, this isn’t a match. Like with most empty arena matches the action almost immediately spills to the outside as the two brawl in the empty seats. It’s not a bad little brawl and less of a plunder match than Rock vs. Mankind.

Of course, in true 2009 TNA fashion, the match ends with Kevin Nash and Scott Steiner (Main Event Mafia members) breaking up the fight.

And, in true 2009 TNA fashion this empty arena match brawl to settle the score led to a match at the next TNA PPV “Destination X” where Sting defeated Kurt Angle to retain his TNA World Championship. You’d be under the assumption the next stipulation would be out of this world if it took an empty arena match to build to it. Well, don’t get your hopes up. It was a standard singles match with Jeff Jarrett as the guest referee and Mick Foley as the special guest enforcer.

Us wrestling fans can only hope a beanball war ensues and the two teams fight in the stands, maybe someone throws a ball in someone’s eye as an homage to Terry Funk? Yeah, probably not but a man can dream, can’t he?

UPDATE (11:59 PM CST): Huge thanks to Voices of Wrestling TNA reviewer Garrett Kidney who revealed that yet another empty arena match happened in TNA, more recent than the 2009 Sting/Kurt Angle affair:

@voiceswrestling The Guns and The Young Bucks had an empty arena match in TNA in 2010.

Not a ton of backstory to this one. Generation Me (The Young Bucks) and the Motor City Machine Guns (Chris Sabin and Alex Shelley) battled in an empty arena match on an episode of TNA’s Reaction show. Reaction was a TNA Impact post-show that was actually way ahead of its time and a great concept. It never really caught on but the style and direction of the show was really cool — it was a look backstage at the wrestlers, with a camera following their conversations though there was no direct acknowledgment of the cameras. If you haven’t seen an episode or two, do yourself a favor and realize how simple and effective something like Reaction could be for all wrestling companies.

Anyway, I called Rock vs. Mankind the best empty arena match ever… that was before I saw this. Whereas the previous four empty arena matches were essentially glorified falls count anywhere matches, this one was a real wrestling match, it just so happened to take place without any fans and under odd lighting. The action is fast and crisp, as you’d expect from these two teams. I love the commentary approach of Taz and Mike Tenay as well, very subtle and soft commentary, it reflected the atmosphere quite well.

This led me to do a bit more research and find that this wasn’t a one-off match, as WCW experimented with a number of nWo Saturday Night segments throughout late 1996:

I had no previous knowledge of these matches which were apparently a reward for Team nWo winning the 1996 WCW War Games:

@voiceswrestling NWO won the right in War Games ‘96 to get their own matches on wcw TV. That fall, they aired empty arena matches involving

@voiceswrestling NWO members as part of regular episodes of Saturday night. Check DDT Digest archives for October and November of 1996.

nWo was allowed to take portions of WCW Saturday Night to own their own alternative “nWo Saturday Night.” There are incredibly 90s in every way and the matches are no doubt — what do you expect in a Kevin Nash vs. Random Jobber match? With that being said, I’m probably going to spend the new few hours of my life watching each and every one of these matches. 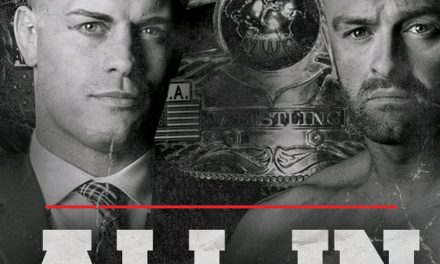