This morning, in front of a crowd of 2500 people, New Japan held WRESTLING HINOKUNI: A special event that served as much more than a regular New Japan “Road To…” show. Headlined by Togi Makabe’s rematch for the NEVER Championship that he never truly lost, Wrestling Hinokuni was a fun show overall with some exciting elements for longtime fans.

Gedo & Roppongi Vice (Rocky Romero & Beretta) vs. Jay White & Yohei Komatsu & Sho Tanaka: The Young Lions teaming up together in this six man was of high interested to me going into this event. Not just for the fact that they were teaming, but also for whom they were teaming up against. RPG Vice have come on the scene strong, winning the Jr Tag Titles on their first major event in NJPW as a team. Gedo, the man who holds the fate of the young lions in his hands, really, being in the match added interest, as well. All told, it was a hyped up affair. Did it deliver? Yes, for reasonable expectations. This 6-man was the opener on a show with nine matches, while featuring the young lions. It wasn’t going fifteen minutes, or ending up as a classic. Everything in the match was solid, and the young lions simultaneous crab spot on the three veterans was a fun moment. In the end, Komatsu fell to the Strong Zero tandem move from RPG Vice, with Beretta scoring the pinfall in eight minutes. **3/4

Bullet Club (Yujiro Takahashi & Cody Hall) vs. Satoshi Kojima & Captain New Japan: Are you ready for Cody Hall’s first NJPW win!? Well, get ready quick… because here it was! Yujiro Takahashi pinned Captain New Japan with the Tokyo Pimps, and boy was he giddy about it. Smiling, laughing, soaking in the excitement Yujiro was in the corner for minutes after the win. Cody Hall, however, was expressionless for the most part. Really, if you saw Cody tonight after the win, and Cody after any of his other tag losses, you wouldn’t tell the difference. Either way, the Cody winless streak is over. God Bless America. **

KUSHIDA & Manabu Nakanishi & Ryusuke Taguchi vs. Mascara Dorada & Tiger Mask & Yuji Nagata: Rich Kraetsch wrote about waiting for KUSHIDA’s turn a week ago here at Voices of Wrestling, and maybe the wait won’t be much longer. In a match that didn’t get much time, going less than eight minutes total, KUSHIDA got the pinfall victory over former Jr Title challenger, Mascara Dorada. Everything felt a little rushed leading up to the victory, and the match never seemed to get going. It’s as if they began it in the middle, so it just had a weird feel the whole time before ending abruptly. That’s alright with me, as the time was given for the important matches later on the card. KUSHIDA’s win came via a bridging back rollup, and Dorada looked so depressed afterward at his poor luck. **

NWA Junior Heavyweight Championship – Steve Anthony (c) vs Jushin Thunder Liger: R. Bruce Tharpe made the introduction for Steve Anthony, and while doing so, was carrying a stick with the mask of Jushin Liger on it. Ligers head on a stick! Tharpe was colorful as always, and played a part in the finish, giving a low blow to Jushin while the referee’s back was turned. With Liger selling, Anthony was able to land the TKO for the win, keeping his NWA Jr Heavyweight Championship. It was a fine match, and Anthony looked really good. Anthony toured with NOAH in 2009, usually on the losing side of tag matches, but with this performance he may be back in Japan sooner than six years apart this time. ***

NWA World Championship – Hiroyoshi Tenzan (c) vs Big Daddy Yum Yum: R. Bruce Tharpe was back, walking Yum Yum to the ring, as sweaty as can be. I first noticed here that Tharpe had “NWA” shaved into the back of his head. Living true, right there. You can follow Mr. Yum Yum on Twitter here! The final match before intermission, Tenzan and Yum Yum wrestled at an average pace. Tharpe, again, got involved in this match, but to negative results this time. Tenzan was able to known Tharpe off the ring apron during an interference attempt, and followed up with the Anaconda Max on Yum Yum for the win. The two NWA title matches were the only matches in the first half to get more than eight minutes. **1/2

Tetsuya Naito & Tomoaki Honma & Alex Shelley vs. Bullet Club (Karl Anderson & Doc Gallows & Kenny Omega): Alex Shelley is the next challenger to Kenny Omega’s IWGP Jr Heavyweight Championship, getting the chance in just a few days at Wrestling Dontaku. Joe Lanza will have coverage of that show here at Voices of Wrestling on the morning of May 3, while you’re all recovering from the Mayweather vs Pacquiao fight. Shelley and Omega got in the ring together at points in this one, with Shelley often getting the better of the current Jr champ. While the juniors were in the ring, Doc and Anderson brawled with Honma and Naito outside the ring. At play also here was Karl Anderson’s continuing infatuation with Maria Kanellis. Karl was looking into the camera at times and waving at Maria, which drew the ire of Doc Gallows. Commentary was chuckling a bit at Karl’s love for The Kingdom’s valet, and the Bullet Club’s opponent at Dontaku in the 6-Person intergender match. When Omega and Shelley were in there together, this match was really fun. Otherwise, it was pretty average. The crowd loving Honma always adds a bit, though, because it just is so fun to watch. The Bullet Club won when Anderson pinned Honma after a Gun Stun and aided Magic Killer. ***

Bullet Club (Tama Tonga & Bad Luck Fale) vs. Kazuchika Okada & YOSHI-HASHI: The Okada vs Fale feud continues on the NJPW house show circuit! We had standard house show fare here, for sure, with the expected result of Okada pinning Tama Tonga happening. Okada won with his rainmaker in eleven minutes, in a match that didn’t have much heat when Okada wasn’t in fighting off Fale. **

Katsuyori Shibata & Hiroshi Tanahashi & Hirooki Goto vs. Kazushi Sakuraba & Toru Yano & Shinsuke Nakamura: It’s bad when I cringe more at watching Tanahashi wrestle these days than Sakuraba. The guy just looks like he is in so much pain walking, and is so stiff with that bad back. I can’t imagine how he’ll be feeling after two sixteen-hour flights, a six-hour car ride, and singles matches with Roderick Strong and Michael Elgin in May. Crazy schedule for a crazy man. The Yano and Tanahashi story continues as Yano squeaks out another win against Tanahashi in this 6-man tag semi-main event. After countering the High Fly Flow, Yano got the roll up win after a hair pull, similar to the New Japan Cup match that began this entire rivalry. It was a hot match, with a lot of action, and the Yano-Tanahashi stuff was really good and not kept super short like previous interactions have been. ***1/2

I quite like the build to Nakamura vs Goto, as well. Nakamura brings the funny when he can’t see Goto, and completely ignores him. It won’t be quite so funny when Goto takes Nakamura to the limit at Dontaku, but I await anxiously for that match.

NEVER Openweight Championship – Tomohiro Ishii (c) vs Togi Makabe: I’ll mostly let some of @SenorLARIATO’s GIFs tell the story of this one. If you’re a previous viewer of NJPW, following the NEVER title throughout 2014-2015, you know what happened here. Ishii and Makabe beat eachother up for twenty five minutes until one of them just couldn’t go anymore. That person was Tomohiro Ishii, who drops the NEVER Openweight Title to Togi Makabe for the second time this year.

Ishii came out for the match without his shoulder taped up, for the first time since late 2014. Makabe, who vacated the title due to illness earlier this year, looked like he was hunting for his title, and in order to get it back, he’d have to kill Ishii. From elbow smashes and lariats to top rope belly to back suplexes and hard knees, this match had brutality as you’d come to expect from both of these men. It really was just a story of the two trying to one up each other in power, strikes, and bursts of energy. With frequent closeups of the NEVER championship belt, NJPW World made it clear what all this brutality was for. Ishii got a second chance with the title, and he wanted to make the most of it. Makabe never really lost the belt, but didn’t have the belt as proof he was the champ. This wasn’t your ordinary case of a challenger trying to win something, but rather the story of both men trying to keep what they had rightfully won already. In twenty six minutes, Makabe, with the King Kong Knee from the top, pinned Tomohiro Ishii to enter the Road to DOMINION as the NEVER Openweight Champion. **** 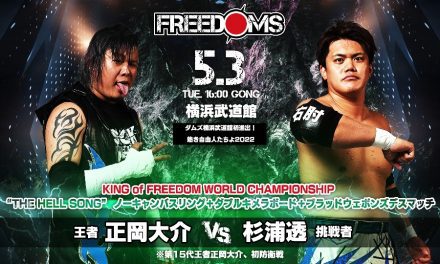 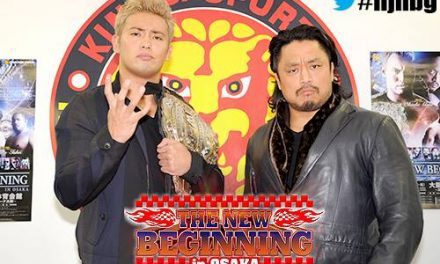