So last week, we got the the final trios team in the three way Trios championship final of Cuerno, Texano and Cage; a really random but awesome three way between Cage, Mack and Son of Havoc which saw Cage winning; and the end to the best of five series of Drago/Aerostar where Drago came up on top. He received the unique opportunity of a championship match with Puma on the April 29th episode, but if he loses he’s banished from the temple for good. High stakes. And speaking of high stakes, we have that tonight with the three trios teams left vying to become the first time Lucha Underground Trios champs.

So remember that mysterious girl who went to find the large man that Cueto kept in the basement of the temple that apparently killed this girl’s parents but was then kidnapped by El Dragon Azteca? Well she’s back again this week, but this time Dragon is putting her through rigorous training to prepare her for facing that beast eventually. What follows is this awesome cinematic of her silhouette in this dark dingy room just kicking the crap out of a bunch of guys, it was so brilliantly filmed. But that wasn’t enough for Dragon who turned the lights back on and fought her himself, and he eventually overpowered her with an arm lock and told her she wasn’t ready yet. Dude has high standards.

Sexy Star vs. Pentagon Jr.: Sexy Star made the poor decision of stopping Pentagon from sacrificing announcer Melissa Santos to his master last week. Pentagon can’t be too pleased. Melissa’s announcing of him here was so unsure and nervous obviously.

This was pretty darn good for the time allotted. Pentagon’s interactions with the camera during this match were classic, like him staring right at us, the audience in the cam and wagging his finger saying he wasn’t done with Sexy Star yet. The story here was Sexy Star kept escaping the Pentagon arm breaker and took all of his punishment he dealt out. My gripe with this was that Sexy Star at times just didn’t sell this well enough for me at all. She’s a heck of an athlete and she does many cool moves, like the amazing between the ropes flipping senton she hit on Pentagon but there’s just something that just prevents me from getting behind her all the way and maybe it’s that. It also could be that I find that her white meat babyface routine is just isn’t really my bag, but it’s over as hell with their live crowd so there’s no reason to change it.

And then, Sexy Star out of nowhere hit this crazy spinning tilt a whirl backstabber type of move and…she won with it. Wow, this is one of the few times where I actually asked what the hell the bookers were thinking here folks. I hated this decision. Hated it. After all the building up of Pentagon to look like a god damn unstoppable force, you have him lose to Sexy Star? Listen, I know she’s gotten some big wins but she lost to Big Ryck a few weeks ago and Pentagon was coming into this like a damn tank. I just don’t buy her beating this guy here in this situation, especially in the manner she did so. Eh, I digress but I just hope this doesn’t derail Pentagon now because he became easily my favorite part of this show so quickly. ***

[email protected] won't let a little thing like ropes get in the way of her revenge. #LuchaUnderground pic.twitter.com/HtkKHRygQC

Well, Mundo’s working out and EL PATRON comes in and makes fun of Mundo for losing the trios match last week. He tells him he’s a hell of an athlete and was one of the main reasons he came there. He said the Mundo match with Puma was almost perfect, and was shocked he didn’t beat Puma in the Aztec Warfare. But he said it’s the story of Johnny’s career, always so close to the BRASS RING (See what you did there Alberto) but yet just can’t quite get it. Mundo then tells him HE’S NOT SOME GUY HE CAN SLAP AROUND. THE ABSOLUTE SALT AND CHEEKINESS IN THIS PROMO GUYS.

Striker goes over the Drago stip again: Next week Drago either wins the Lucha U title from Puma next week or he leaves the temple forever.

Lucha Underground Trios Championship Tournament Final – King Cuerno/Cage/Texano Jr. vs. Mack/Killshot/Big Ryck vs. Ivelisse/Son of Havoc/Angelico: These guys are getting 30 minutes. Oh my goodness, this could be something special. I don’t even know how I’m going to do a proper writeup of this. I’ll try my best to summarize, but gifs may have to do a decent amount of the talking here.

Hmm, they start with three guys in the ring at once, an interesting way to do this. It’s Cage, Killshot and Angelico to start. Killshot and Angelico the two smaller guys gang up on Cage in the corner. Cage ends up suplexing them both in each arm, what a freak. Texano is tagged in now and Cuerno comes to help double team with him, hitting a double codebreaker on Angelico. Cuerno controls Angelico for awhile until finally he tags in Havoc while Mack gets tagged in and cleans house. Mack then hits a crazy suicide dive to the outside. The man is 300+ pounds remember. Ryck and Cage are left in the ring and they fight it out, Ryck gets knocked down, Cage goes and hits a top rope moonsault to the outside onto the other competitors. The man is crazy. Yikes, we have a serious issue here though. Ivelisse got really hurt after trying a dive to Cuerno on the outside and she was in obvious excruciating pain. When Cage got back inside, Ryck cleaned his clock with a sick lariat.

Angelico then ran off the apron and hit a diving knee into Texano whose momentum carried himself into Daivari who was sitting front row again! Daivari was not fond of this and just started punching and slapping the hell out of Texano because of it and even tossed him into the front row chairs. He throws Texano back in the ring, and Killshot takes advantage of this with the double stomp and eliminates Team Cuerno. We’re down to Team Ryck and Team Dysfunction.

Angelico is absolutely mauled by Ryck’s team. They just absolutely kick the crap out of this kid, and he does a hell of a job from working from under and selling it great. Ryck threw Ivelisse off the apron here which made me really cringe. I’m sure Ryck had no idea the extent of her injury though and probably thought she was just selling really well, so I understand. Mack hit a top rope elbow drop onto Angelico and the crowd popped huge for the big man. They love him and so do I. Finally, Angelico fights back and tosses the big men over the ropes and is alone with Killshot but Killshot hits his back suplex into the knees to the back combo. Finally, Havoc is tagged in but Killshot hits the Spanish Fly for a nearfall. Killshot goes for a reverse frankensteiner on Havoc up top but Havoc is able to hold onto the turnbuckle. Ivelisse, a true warrior and professional climbs up the turnbuckle. Mind you she has a broken ankle. She dives outside and Mack/Ryck catch her. Son of Havoc though shoots through the ropes to tope into Mack/Ryck.  Angelico then hit the Fall of Angels on Killshot to win the Trios championship! What a fun match and serious respect points to Ivelisse for finishing that match, that was truly an amazing testament to her heart and professionalism. ****1/4

But wait! Dario Cueto comes out of his office! He congratulates the dysfunctional team on winning the titles and is stunned. But the scumbag tells them they have to beat one more team selected by HIM with no disqualifications! Out comes THE CREW of Mr. Cisco, Bael, and Cortez Castro!

Trios Championship No DQ Match- The Crew vs. Angelico/Ivelisse/Son of Havoc (c): How Ivelisse can make it through this, I have no idea so let’s hope Angelico and Havoc pick up the slack here. The Crew jumps them outside right away. Bael even bites Ivelisse. This is just a full on mugging out here. Cortez Castro grabs his kendo stick and has Ivelisse held by Bael, but Havoc thankfully comes in for the rescue. The Crew jumps Havoc and places him in the corner and kick him one after the other. Bael takes Angelico up the stairs. Castro keeps beating on poor Ivelisse, Cisco is brawling with Havoc. Angelico nails Bael with a knee strike up at the top of the Temple, but then gets back body dropped onto that famed balcony where Drago and Mundo once jumped off of. Castro starts choking Ivelisse with the stick.

Cisco TRIED to suplex Havoc over the metal fencing on the second tier of seats, but he failed miserably and both fell to the floor outside sloppily. Havoc then properly does an amazing moonsault off the fence into Cisco on the outside. Havoc got blindsided by Bael though, and Bael and Castro went to double team Ivelisse in the ring but out of nowhere Angelico does a flying crossboard from the balcony to the ring. What an absolute maniacal spot to even think about doing and it was just…breathtaking. Ivelisse on one leg then just takes out The Crew with the kendo stick, and then directs Son of Havoc and Angelico to do a shooting star press and double stomp in stereo to FINALLY leave this building as official Trios champions. What a damn roller coaster ride this was. ***3/4

Son of Havoc is finally on the offensive! #LuchaUnderground pic.twitter.com/vCXkyx6vp8

Final Thoughts: That was awesome, and You Deserve It chants filled the temple following this, and I’d be damn well inclined to agree. What a beautiful story told here. Three people who over the past months had grown to dislike each other, breaking a relationship along the way and all having a general distaste for each other. Thrown together as a team by Cueto as some sick lab rat experiment of his because he loves chaos. They, against all odds on this night, even with Dario throwing a THIRD team at them to eliminate while one of their own was hobbling, somehow found a way. Angelico’s unreal crossbody spot from the balcony to the ring was something to behold. Ivelisse gutting through this match with a broken ankle, Havoc being the glue that kept this together, everyone will remember this. The initial final match, and even the impromptu Dario impulse match completely made up for Pentagon losing. This was wonderful stuff and made me feel like a kid again watching these three pull this out in this fashion. What an event. And once again, shoutout to Ivelisse for somehow making it through this match. What an absolute gamer. 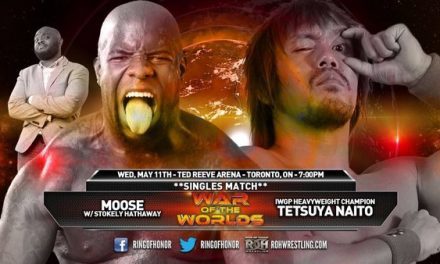