Last week, Ring of Honor brought us two matches from their Supercard of Honor IX show. This week, we are back to normal episodic television. This is the first episode from the tapings in San Antonio and the Texas crowd is super hot as the show starts. Kevin Kelly tells us we will see Jay Lethal, War Machine, and a main event of Cedric Alexander vs. Michael Elgin. But first, the House of Truth music hits.

Donovan Dijak (with Truth Martini) vs. Dalton Castle: This match was made after Dalton Castle made his debut to challenge Jay Lethal for the ROH Television Championship on the Episode 184 of ROH TV. Donovan Dijak intervened on Lethal’s behalf, which led to a Lethal Injection and a win for the champ.

As Dalton Castle does his pre-match shtick, Kevin Kelly promises us that, “believe it or not, there will be a wrestling match in a few moments.” It’s hard for me to believe, too, Kevin. Abject goofiness to start to get over that Donovan Dijak just does not like the femininity of Dalton Castle. The evidence suggests that I am the only person who discusses wrestling on the internet and does not like Castle but trust that I dislike him enough to make up for everyone else.

Still, I can’t deny that Castle is quite good in the ring. He showed that in his match against Jay Lethal. He seemed much more concerned in this match, however, with getting over the gimmick. They did engage in some back-and-forth action early on but Dijak is not on the level of Jay Lethal, which helped to expose Castle’s shortcomings somewhat. Most of Castle’s high spots were very slow to come together.

Castle starts to take control toward the end of the match. But as he goes for a german suplex near the ropes, Truth Martini grabs hold of Dijak’s foot so Castle can’t lift him. Dijak is able to counter and get Castle up for a very sloppy Feast Your Eyes. It’s good enough for the win. **

After the match, Truth Martini comes in the rings and attacks the boys that accompany Castle to the ring. Castle responds by… grabbing Martini’s genitals. Truth is able to bail from the ring and his balls live to see another day. This match had zero appeal to me. I won’t repeat my rant from Castle’s debut about why I don’t like him. But I’d just rather see this guy wrestle than all the other silliness.

War Machine (Ray Rowe and Hanson) vs. Andy Dalton and Ken Phoenix:  “Dirty” Andy Dalton licks his hand before sticking it out for Ray Rowe to shake. Rowe shakes it anyway then destroys Dalton with a great looking Superman punch. He tags in Hanson and they hit the back suplex/leg drop combo I believe is called The Fallout to end the match. NR

Rowe licks his hand and grabs Dalton’s limp hand for a little post-match payback. It was fun seeing the local guys come in to do the job and War Machine looked great again, even if it was for less than 30 seconds.

Next, ReDRagon is out for The Fish Tank.

Bobby Fish and Kyle O’Reilly talk about their many championships. Then they introduce their “guest at this time,” Jay Lethal. But not before O’Reilly can mention that he made Lethal tap out.

We get a little setup for Lethal’s match with Bobby Fish at the upcoming Hopkins, Minnesota taping. But more importantly, Lethal is out to push his new DVD. Fish notes, “there’s a part in here where he talks about his hot ex-girlfriend. It’s great!” Then, CM Punk comes out to confront Bobby.

Lethal and Martini now want to introduce the new belt they had made, which corrects the mistake ROH made when they put “Television” on Lethal’s title. Fish says ROH already has a World Champion: Jay Briscoe. Lethal does not want to hear that name! “Jay Briscoe was born on the highway. That’s where most accidents happen.” And that comment brings Jay Briscoe to the ring.

Briscoe attacks Lethal and they fight to the back. Fish and O’Reilly get back in the ring to continue The Fish Tank but they’re attacked by the KRD. The KRD teases the Kingdom finisher before ACH, Matt Sydal, and Christopher Daniels come out and clear the ring. This was fun. I’m all in on Briscoe vs. Lethal.

Before the main event, we get a promo video with BJ Whitmer and Adam Page. Whitmer continues his criticism of a few weeks ago that ACH gets opportunities that he doesn’t deserve. Adam Page says he’s paid his dues and he’s got a one-way ticket out for ACH.

Michael Elgin vs. Cedric Alexander:  As we work through the feeling out process to begin the match, I am really enjoying Elgin’s heel work of late. The early story is the fight between Elgin’s strength and Alexander’s high-flying ability. Alexander gets some high-risk offense going but when he makes a misstep, Elgin punishes him with strength. Eventually, Elgin establishes the advantage in the match. They end up on the outside and Alexander attempts to match Elgin’s power with a couple of strikes but that is a poor idea as Elgin just shrugs them off and destroys Alexander with a forearm.

Alexander is eventually able to create some daylight and takes the opportunity to hit Elgin with rolling suplexes. The San Antonio crowd responds with an “Eddie!” chant. At this point, the combatants switch roles with Elgin attempting power moves and getting in a move here and there before Alexander is able to counter. Alexander finally maintains some momentum and goes up top for Overtime to finish Elgin. He hits it but attempts another that Elgin blocks.

Now it’s time to swap big moves and near falls. Alexander gets Elgin up on the top turnbuckle and attempts a hurricanrana. Alexander hits the rana but Elgin no-sells it, rolls through, and powerbombs Alexander. Elgin follows that up with a big forearm and a sitout powerbomb to finish off Alexander. ***1/2

Michael Elgin cuts a post-match promo in which he declares that he’s a killer and anyone who steps up to face him has already dug their own grave.

This was a very good match. They mostly maintained the story that Alexander’s offense could not match the power of Elgin. ROH is doing a good job of building Elgin back up. If this crowd is any indication, there’s a possibility he still has some juice. They are going to need something in the stale main event scene.

Final Thoughts: This was an excellent episode. I didn’t care for the first match but a lot of people will like it, I’m sure. However, the War Machine squash was fun and continued to build those guys again as a tag team with the return of Ray Rowe. The ReDRagon/Jay Lethal/Jay Briscoe segment was great and got me excited for a Lethal/Briscoe matchup. And the main event was a match I would recommend everyone check out. Everything made sense and had a purpose. That’s all I ever want out of a weekly wrestling show. Next week, ReDRagon will be in action as they defend the tag team titles against The Kingdom. 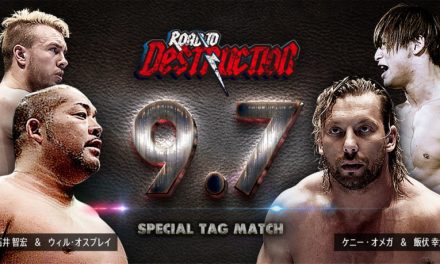