We are coming off last week’s very good episode of ROH TV, which saw the return of Ray Rowe and a ***1/2 AJ Styles/Mark Briscoe match.  This week, however, ROH takes somewhat of a break from the episodic nature of weekly television to bring you two matches from Wrestlemania weekend’s Supercard of Honor IX.  Once I realized these matches would be on ROH TV, I avoided them so I could see them fresh for this review.  I know you’re all impressed with my sacrifice.

Kevin Kelly is joined on commentary by Adam Cole, who is replacing Steve Corino.  For some reason, ROH decided to do the commentary in post-production and it is painfully obvious.  Kelly reminds us that we will see Jay Lethal taking on Jushin “Thunder” Liger for the ROH TV Championship and Jay Briscoe putting the ROH World Championship on the line against Samoa Joe.

We see Liger’s entrance, followed by a Lethal video promo. Jay Lethal tells us this match is personal because Liger stands in the way of Lethal holding the record for longest ROH TV Championship reign.  No one mentioned this record again during the broadcast. Hilariously, Lethal calls his title simply “the ROH Championship” and covers up the word “Television” on the title as he shows it to the camera.  He’s great.

Truth Martini is not with Lethal. There are some very cool exchanges early with Liger keeping the advantage throughout. Lethal does an amazing job at making the necessarily slow pace seem natural with fantastic selling. Liger misses a baseball slide to the outside, which leads finally to Lethal gaining control. Lethal slowly but surely dominates for a bit and his confidence grows. But it grows perhaps too large as Lethal unleashes a snot rocket on Liger and then heads up top for the elbow. Liger blocks Lethal off the top rope to neutralize his momentum. The two trade strikes for a bit before Lethal attempts a Lethal Injection. However, Liger is able to avoid it and hits a palm strike. They continue swapping control before Lethal is frustrated and brings in the TV title for assistance. He misses Liger with the belt and Liger takes it away. While the referee attempts to wrestle the belt away from Liger, Lethal hits a super kick. Liger stumbles long enough for Lethal to finish him off with the Lethal Injection. ***

This wasn’t anything special but it was fun. It’s honestly amazing Liger can still work at this level.  Jay Lethal is one of the best things about ROH, if not the best, at this point, and it doesn’t seem to matter who his opponent is.  This isn’t something you need to run out and watch but it’s definitely enjoyable.

Next, we get the same Jay Briscoe promo video from last week. He says he’s not the same as he was when he and Joe battled 10 years ago. Now, Joe is going to have to kill him to take the title.

That is followed by a video package showing the four-way from the 13th Anniversary Show, which segues into Jay Briscoe’s in-ring promo from March 13th, where he said he was the baddest man in pro wrestling. That comment, of course, drew out Samoa Joe, who challenged Briscoe to a match at Supercard of Honor.  And here we are…

To be totally honest, I haven’t watched hardly any of Joe’s run in TNA. I certainly haven’t watched any recently. But as for all the hand-wringing that he’s not in good enough shape to be signed by WWE, he looks a completely reasonable size for this match. Joe and Briscoe spend the early part of the match trading offense. Of course, as I say that Joe looks in fine shape, he really seems to struggle with a couple of spots, which may or may not be weight related. He took an awkward bump on a snap mare and couldn’t get over the top rope when he was clearly supposed to end up outside after being thrown by Briscoe. However, he looks good on several enzuiguiris and a tope. So maybe Joe is just in that spot between TNA shape and getting back into working shape.

The momentum switches are not confined to the beginning of the match. Eventually, Joe finds an opening for a muscle buster but Briscoe counters into a neckbreaker. Several times, Jay attempts to pick up Joe for an offensive move and it looks like Jay won’t be able to get him up. However, Jay quickly accomplishes the move each time. That trend ends when Briscoe goes for the Jay Driller but gets backdropped instead. That leads to a cool Joe spot where he powerbombs Briscoe into a pin and when Briscoe kicks out, Joe hangs onto Briscoe’s legs and rolls him over for a Boston Crab. Joe shows off his submission skills here as he turns the crab into an STO, then a crossface, and then even locks in Briscoe’s open arm as Briscoe grabs for the rope.

After they get back to their feet, Joe goes for the muscle buster again. Briscoe counters and ends up on the ring apron. He attempts a sunset flip but fails and instead gets Joe up for the Jay Driller for the pin to retain. ***

This match never really connected with me.  However, I’m not sure if it was the match or that I went in with very low expectations having consumed some of the tepid reactions to the match.  It was just a constant stream of trading offense that never really got there for me.  I understand that the story was Joe is still at the top of his game and Briscoe being able to overcome him is intended to make Briscoe look exceptionally strong.  But I couldn’t seem to go along for the ride.  Still, these are two very good workers and there were spots that I enjoyed.  I just had higher expectations.

As we fade out on this episode, Kevin Kelly lets us know that Dalton Castle will return to ROH on next week’s episode.  I couldn’t be more excited.  Next week’s main event will be Cedric Alexander vs. Michael Elgin from the San Antonio tapings.

These are two matches worth watching but probably not worth going out of your way to see if you weren’t planning to watch Supercard of Honor or this episode of ROH TV.  It made very obvious sense to use Joe to build Briscoe even more since Joe is apparently headed for WWE.  And while it doesn’t seem like ROH had much time to do much of a build, I just wanted this to feel bigger.  When Joe first showed up in ROH, I was excited for this matchup but it did not meet the hype.  That said, I’m looking forward to the Alexander/Elgin match next week and seeing who is Briscoe’s next challenger for the ROH Championship. 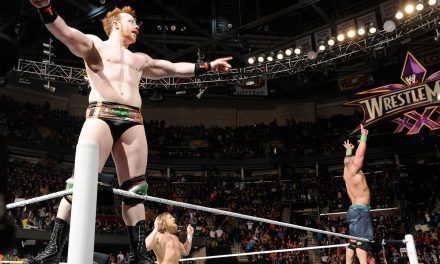