This was a Live Tweet edition of Impact, so people’s tweets appeared on the screen throughout the show. I inherently dislike the idea. As a viewer it adds absolutely nothing. Cherry picked tweets talking about how brilliant the show is or offering empty platitudes just to try and get their tweet on TV offers absolutely nothing to the viewing experience. None were particularly insightful, nothing thoughtful and none were entertaining. It’s nothing but an attempt to create false engagement.

Kurt Angle opened the show and talked about how tough his match with Lashley was last week. Lashley came out and showed footage of how blatantly his shoulder was up and wanted a rematch. This drew out Eric Young who claimed his victory over Roode last week warrants a title shot. It naturally ended in a fracas and Lashley accidentally Speared Angle when Young moved out of the way. A three way World title match was made for the main event. TNA really aren’t very good at making World title matches seem special. They just throw them out there way too often.

Awesome Kong vs. Gail Kim: This is the biggest feud in the history of the Knockouts division. The match where Kong beat Kim for the title is the most watched TNA video on YouTube (with nearly 6 million views). They haven’t wrestled since 2008. And here it is being thrown out on Impact with absolutely no build at all. With the right build this match could main event a TNA PPV. Kong dominated Kim early. Kim went for a Sunset Flip but Kong just sat on her. Kong locked on a Camel Clutch but Gail fought out and was quickly shut down with a clothesline.

Kong hit a chokeslam for two. Kim locked on a Dragon Sleeper but Kong rammed her into the turnbuckle and dumped her out to the floor. Gail dropkicked Kong into the railing. Gail fired up with forearms and kicks. Gail hit a crossbody for two. Kim went for Eat Defeat, Kong hit the turnbuckle and Gail rolled her up for two. Gail hit Eat Defeat for another near fall. Gail locked on a headscissors but Kong dropped her with the Awesome Bomb for the win. Nowhere near the same intensity of their old matches. **1/4

The Revolution were in the ring. Storm read Khoya, Abyss and Manik the riot act. Storm mentioned Sanada will never be seen again for failing him one time too many. Sanada’s TNA run started well enough but then TNA decided to make him a derivative, Great Muta rip off because apparently they don’t have the imagination to let a Japanese wrestler be anything else (and I really liked Sanada, he’s a talented wrestler). Oh well. There will be a tag team tournament next week to determine the new tag champs following The Wolves vacating the titles last week. Storm wanted his goons to wrestle to determine who will be his partner next week.

Abyss vs. Khoya vs. Manik: Manik took it to Abyss with a chair but Abyss dropped him with a clothesline. Manik took out Abyss with a missile dropkick and locked on an armbar. Khoya grabbed Storm’s stick (that’s not a euphemism for anything) and beat Manik and Abyss with it. Khoya hit Manik with the Sky High for the win. Khoya is far and away the worst of the three so naturally he won the match and will team with Storm next week. This wasn’t so good. N/A

The Rising (Drew Galloway, Shaun Ricker (who is going by Eli Drake in TNA) and Camacho (who is going by Mica in TNA)) made their way to the ring. Drew did his same old “I love wrestling” promo. Again his delivery is good but the content is tired at this stage. Mica said he’s the son of Haku so wrestling runs in his blood. He called the Beatdown Clan (BDC) bullies and said he’s going to stand up to them. Eli Drake said they’re not superstars, they’re professional wrestlers. The BDC made their way to the ring. Low Ki and Kenny King were carrying BDC flags. A brawl ensued and the match is on.

The Rising vs. The BDC: Naturally the first match in this feud is the six man tag that should be the blow off match. TNA just can’t take their time with anything. Drake hit a Powerslam and tagged in Mica. Mica hit a dropkick and a neckbreaker on MVP. Mica went up top but Kenny King pushed him off the top to the floor. The BDC worked over Mica for a while before he finally made the tag to Galloway after a Samoan Drop. Galloway ran wild before Drake hit a really neat slam. Mica took out the BDC with a crossbody to the floor. Homicide hit the ring and took out The Rising. Naturally this ended just as they were really getting going and the DQ, to be expected when they rushed into the first match in this feud, was lame. Homicide is the newest member of the BDC. **1/2

DJ Zema Ion vs. Davey Richards: Fun back and forth to start punctuated by a by kick by Davey on the apron. Zema took over after a dropkick. He then missed a big corkscrew off the top, Davey clotheslined Zema to the floor and hit a big tope. Davey hit a missile dropkick followed by a handspring enziguiri for two. Zema went for a superplex but Richards dumped Ion off the top. Richards missed a footstomp which allowed Zema go for a tornado DDT but Davey escaped and hit a spinning roundkick for three. This was a breath of fresh air on this show, a fun athletic match. Naturally it was only five minutes long. **3/4

The Hardys made their way to the ring. Next week will be the one night tag team tournament where teams will compete for the right to enter Ultimate X, where the titles will be on the line. The Hardys officially entered next week’s tournament. EC3 and Tyrus entered next, EC3 announced that he will be entering the tag team title tournament with Bram. Anderson and Spud were the next two to enter. These kinds of tournaments always expose the lack of real teams in TNA. Austin Aries was out next. Aries is entering too and his partner is Bobby Roode. That’s a team that TNA didn’t get the most out of the first time around.

TNA World Heavyweight Championship – Bobby Lashley vs. Eric Young vs. Kurt Angle©: EY dropped out to the floor to let Angle and Lashley go at it. Mathews threw out the 33% chance of winning thing and Taz essentially said he was wrong. After a while Angle and Lashley just decided to go after Young and hit him with a Heart Attack. Angle began unloading with German suplexes and took Lashley out to the floor. Young hit the Piledriver but Lashley broke up the pin. Lashley hit a running Powerslam but Angle kicked out.

Lashley hit a delayed vertical and then hit the Spear but EY made the save. Lashley did a leapfrog but his knee buckled. They did the same thing with Roode last week. Angle rolled off multiple German’s on EY and Lashley. Angle locked the Ankle Lock on Lashley. Lashley rolled through and Angle fell to the floor. Young locked a Figure Four on Lashley straight after but he reached the ropes. Young grabbed a chair and wedged it in the corner. Lashley hit a delayed vertical on Young and set up for a Spear but Young sidestepped him and Lashley hit the chair in the corner. Angle came in, Angle Slammed both Young and Lashley, and hit a big Moonsault on Lashley’s injured leg for the win. They’ve really killed any momentum Lashley had last year. Decent match but it didn’t feel like a World title match. Young attacked Lashley with a chair after the match. **3/4

Last week was a tight, focused two hours of wrestling. This week was not. Same old show: Rushed and forgettable. 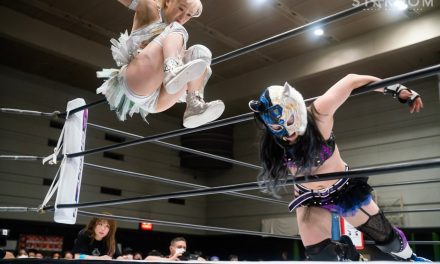 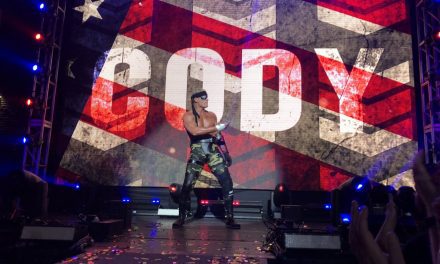