Hey everyone.  You may or may not be aware, I work on a YouTube wrestling video game review show called the Funtime Arcade, and we’ve gotten an invite to go to a wrestling convention in Cleveland this summer.  We’re trying to raise some funds for transportation (or trans, as they say in the biz), and we’ve got an Go Fund Me set up.  Check out the link, and if you like what I do here and can contribute, I’d appreciate it. http://www.gofundme.com/qgbn9s

The podcast week in review, brought to you by Advance Auto Parts.

Talk n’ Shop #39 (3/28/15): Business picks up as the Young Bucks are back, joining Doc and Karl to discuss sponsors, their upcoming movie (!), and mess around for a half hour. A nice rebound show from the week prior. THUMBS UP

Piper’s Pit #52 (3/30/15): Part 2 with Jake “The Snake” Roberts. The first half of the show isn’t much, as they discuss random topics like the digestive process of snakes. Things pick up when Jake gets into his childhood and early days in wrestling, which is a harrowing listen. If you’ve seen Jake’s documentary or heard his other podcast appearances, you’ve heard a lot of this before, but on its own this segment is a compelling, if heavy, listen. THUMBS IN THE MIDDLE

Taz Live! (3/30/15 – 4/3/15): No Human Podcast Machine this week, as Taz tries something new and goes live for 2 hours for five straight days. I won’t lie, dear reader, I just didn’t have time for another 8.5 hours of Taz (subtracting the usual 90 minutes of audio Taz does weekly), but I did check in where I could. Taz did a good job playing off guests like WFAN’s Evan Roberts and Colt Cabana, but he also took a lot of fan calls, which never ends well (one caller apparently thought Roman Reigns broke character when he smirked during the Mania main event). He picked a good week to try this experiment, as he got to discuss all the fallout from WrestleMania and a noteworthy Raw, but I don’t know how well it would go during an ordinary week. THUMBS IN THE MIDDLE

Steve Austin Show #206 (3/31/15): Wade Keller returns to help Steve recap WrestleMania. Wade does his usual good job, and I’m always impressed by the way he can almost take over the show and interview Steve about his perspective as a superstar. Austin has some curious opinions (he thought Big Show winning the battle royal was a great idea), and he can be a little gun shy to criticize current wrestlers, but this is a thorough and thoroughly enjoyable post-PPV rundown. Also notable is Podcast One is now doing a minute of AP stories at the end of shows, but all I ever here is a clicking noise. THUMBS UP

MLW Radio #173 (3/31/15): MVP, Court, and MSL reconvene after WrestleMania weekend to run down the various events. They go over WrestleMania, of course, which MVP didn’t watch, so he doesn’t add a whole lot there. But the trio also covers the various extracurricular events they attended live, including Walemania, NXT, ROH, and Hoodslam of all things. In a week of endless WrestleMania audio, it was nice to have a discussion of other events on all these recaps. There’s also talk of all the parties, MVP goes hiking, and a really interesting discussion of how the sports media is shifting in its depiction of wrestling. THUMBS UP

Talk is Jericho #130 (4/1/15): Edge joins Jericho to discuss acting and the death of Perro Aguayo Jr, but the bulk of the show is a rundown of WrestleMania. The two do a non-sequential recap of the show in a breezy manner, comparing it to their own WrestleMania experience (Edge’s recounting of the similar manner in which he cashed in the Money in the Bank briefcase was quite interesting). Edge is an upper tier interview so this is an easy thumbs up. But what will get the most pub is the intro, where Jericho goes off on fans for catcalling at the Hall of Fame. He’s not wrong, but threatening to slap fans doesn’t paint him in the best light. And I wonder if he still feels fans can say whatever they want at wrestling shows after Monday Night Raw? < Edge’s interview starts at 24:56> THUMBS UP

The Ross Report #59 (4/1/15): Dave Meltzer joins JR to talk, what else, WrestleMania! They run down the big card as well as possible future directions for the WWE. They also toss in some thoughts about TNA, Lucha Underground, and Ring of Honor, which makes for some nice variety. The end result is 2 hours of Meltzer, and even though I had already heard him break down the show, this was a very fun show. <Meltzer’s interview starts at 15:38> THUMBS UP

Who’s Next with Goldberg #42(4/1/15): Bill chats with Glory kickboxer and Bellator MMA fighter Joe “Stitch ‘Em Up” Schilling. Schilling discusses getting into fighting, entering a toughman contest at 17, the Diaz brothers, and the future of Glory kickboxing. The interview starts out fine but runs out of steam as it progresses; Joe and Bill complaining about internet fans marks the low point. THUMBS IN THE MIDDLE

Bauer & Pollock (4/1/15): WrestleMania wrap-up is the order of the day, with thoughts on the big show, the Raw the next night, NXT, Walemania, and more. They also touch on the Network subscriber number, the announcing situation, media coverage of wrestling, Lucha Underground maybe shutting down for the year, and Wale hanging out with Linda McMahon. If you aren’t burnt out on WrestleMania audio (a big if at this point), this is an enjoyable listen. THUMBS UP

Art of Wrestling #244 (4/2/15): Headbanger Thrasher is the guest this week. He has of fun stories about touring All Japan after 3 months in the business, training at the Monster Factory, being a WWF enhancement guy, the origin of the Headbangers, the Flying Nuns, and getting frozen out of the WWF since leaving. You may not have shrugged when you saw his name come up, but Thrasher has a lot of great stories and this is a super listen. THUMBS UP & BEST OF THE WEEK

Steve Austin – Unleashed #208 (4/2/15): Steve talks a bunch of headaches, hassles, and horseshit with his wife Kristen and Kristen’s brother Mitch. Can you fathom having Stone Cold as your brother-in-law? You get lots of chatter about driving, recycled water, deer horns, bees, bears, and oh so much more. Mitch isn’t exactly Mr. Electricity. Take a profound pass on this one. THUMBS DOWN

The Jim Cornette Experience #71 (4/2/15): The show starts with a long intro, so long I don’t think we can even call it an intro (it goes about the same length as the interview). Jim and Alice cover Scientology, Tyler Black, stories about ROH almost getting on the Fight Network in Canada, and more fan mail from Juggalos. Then Steve Austin joins to talk about his formative years in wrestling, guys he learned from, the Hollywood Blondes, Jerry Stubbs, and the unwanted cleanliness of modern wrestling. It’s a short interview but covers different topics you’ll usually hear from Austin. <Austin’s interview starts at 42:08> THUMBS UP

Talk is Jericho #131 (4/3/15): Jericho’s main guest is Tom Commerford, former bassist for Rage Against the Machine and Audioslave, who’s fronting a new band Future User. Commerford talks about his new band, the state of the music industry, waterboarding John McEnroe, his old bands, and giving up pot. Not the best music interview Jericho has done, but an entertaining one. Jericho is also joined by Jonathon Logan, the man who made his blinking jacket, in a brief and superfluous bit. Logan’s interview starts at 5:59, Commerford joins at 25:26> THUMBS UP 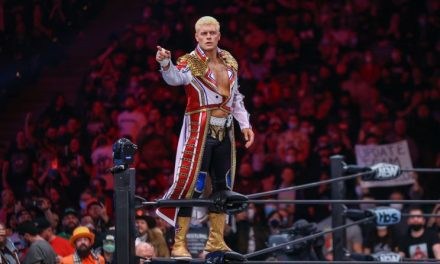 Double or Nothing: Cody Rhodes Is Betting on Himself Again 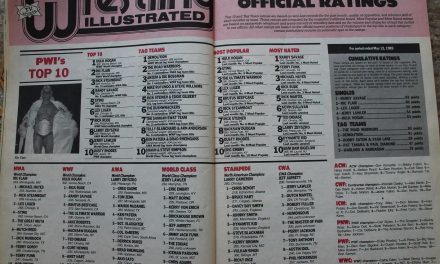 Growing Up On The Apter Mags