Welcome to Voices of Wrestling’s coverage of NJPW Road to Invasion Attack at Tokyo’s Korakuen Hall, on April 2, 2015! It’s the final show before Sunday’s Invasion Attack PPV, and we’ll see quite a few matches tonight with direct relation to key matches on the Pay Per View. Before that, though, we start off hot with a first time ever dream match!

Yohei Komatsu vs Sho Tanaka (8:12): This was awesome, solely for the fact that the story of the match was the two men working the crab. THE CRAB! Sho Tanaka seemingly had Yohei locked up in a double leg crab late in the match, but Komatsu fought it off with the crowd roaring with support. Every attempt to grasp the ropes looked like it took all his energy, but he got there. Not too long after, Komatsu was able to wrench Sho in the double leg crab, but Tanaka fought it off, as well. It would seem the crab just wasn’t going to do it for either man… but wait a minute! Komatsu rolls through a Tanaka whip to render a single leg crap! Surely Tanaka will escape, right? Nope. Valiantly, he tried, but Komatsu pulled Tanaka to the center of the ring and wouldn’t budge. Tanaka was forced to tap, giving Komatsu the win in this not-quite-first-time-ever dream match. ***1/4

Jushin ‘Thunder’ Liger & Tiger Mask & Jay White vs KUSHIDA & Alex Shelley & Ryusuke Taguchi (10:18): Alex Shelley pinned Jay White after Automatic Midnight. Poor Jay was helped to the back while his teammates stayed in the ring to shake hands with the winners. Jay has a full on mohawk going now, and was quite animated during the match. Until he died at the hands of Shelley, that is. **

Yuji Nagata & Satoshi Kojima & Hiroyoshi Tenzan vs Karl Anderson & Doc Gallows & Cody Hall (11:21): I’ve never understood the fascination with face paint. Not just in wrestling, but anywhere. Without going into how face paint has evolved through out history and whatnot, it’s 2015, and what is the deeeeeal with painting your face? Doc Gallows came out with the multi-colored face paint tonight, letting us know he has a ton of personality despite being just another big mean guy in the Bullet Club right now. I know he has personality, you don’t need the face paint to tell me, buddy. I’ve never worn face paint, never plan to, never want to. Maybe I’m the weird one? And another thing! Everything Cody Hall does look weak. It’s as if he knows he has power, but is afraid to use it. The clotheslines are soft, the lifts are half-hearted, the kicks are short… grow a pair, Cody. Nagata got the win here with the Backdrop Hold, ending a match that just never got going in earnest, despite Tenzan’s best efforts. **

Mascara Dorada & Captain New Japan vs Tama Tonga & Kenny Omega (10:32): MORE FACE PAINT! I mean, none of this face paint is a surprise, of course. I just really don’t get the appeal. Masks, however, thems are cool! For those who haven’t followed along to this entire tour, Kenny Omega’s hair has no returned to its normal color. Dorada and Omega started the match off hot, in what ultimately was the best stretch of the match. When those two were in, this was really good. When any combination of CNJ or Tonga was in, not so much. Best spot of the match, however, did involve CNJ. Tonga and Omega had control on Cappy, but took a moment to Too Sweet each other, then turned right into a double uranagi. It wasn’t much further after that, though, that Tonga turned the tables and pinned Captain New Japan after what was supposed to be the Headshrinker. **

At intermission, an interview with AJ Styles and Yujiro Takahashi aired for their upcoming main event. AJ put over Kota as an amazing athlete, but said he lacks the experience to win. AJ also mocked Ibushi for wrestling dolls, while Yujiro challenged Naito to a pillow fight. I don’t know, my translation could be off on that last one.

Hiroshi Tanahashi & Tomoaki Honma & Katsuyori Shibata & Togi Makabe & Hirooki Goto vs Shinsuke Nakamura & Toru Yano & Tomohiro Ishii & Kazushi Sakuraba & YOSHI-HASHI (16:42): This ten-man began with Toru Yano completely toying with Tanahashi. Toru goading Tanahashi into chasing him around the ring before Yano tagged out, leaving Hiroshi empty handed for the time being. That was only one of the interlacing rivalries wrapped up in this big match, however. Shibata and Honma continued on as the teammates who weren’t too thrilled with each other’s actions, coming nose to nose at times. Ishii and Makabe interacted, albeit briefly, in dramatic and strong fashion. Even Honma had some fun interplay with Ishii in there, again with Ishii taking him lightly only to suffer a kokeshi to the injured shoulder. Of course, in the end, we got our Nakamura and Goto match up. Nakamura went for his Boma Ye, but missed and never truly got the better of Goto. The finish saw Honma hit the kokeshi onto YOSHI-HASHI from the top rope, with Goto finishing off ALL-CAPS for the pin after Shouten Kai. Tanahashi did far less than anyone else has in the ring tonight, while looking so stiff it hurts my back just watching. ***3/4

After the match, Goto celebrated his victory by calling out Nakamura. Shinsuke continued to act nonchalantly at his challenger, but it is clear that is a Intercontinental Championship match in the making.

Rocky Romero & Beretta & Kazuchika Okada vs Nick Jackson & Matt Jackson & Bad Luck Fale (12:25): The return of Beretta and debut of Roppongi Vice were the two things I may have been most looking forward to on the Road To shows leading up to Invasion Attack. Beretta has gotten a pinfall on the tour, and by all accounts the team has done relatively well. It’s a much needed freshener for Romero, of course. However, I couldn’t help but notice the complete lack of reaction for Beretta here in Korakuen. I supposed I expected too much too soon, so it will take time. It felt like Emma coming out on WWE Raw, the volume just turned all the way down in the arena for poor @trentylocks.

The Young Bucks worked almost the entire match, with Fale seemingly in there for less than one minute of total match time. Which, to me, was the best case scenario. This was a fun match, and while I can’t call it a great showing for Roppongi Vice, as it wasn’t a showcase for them, it was pretty solid from all involved. Nick pinned Beretta to win following the Indytaker as seen below. ***

After the match, as the Bullet Club was celebrating, Okada ran in and attacked Fale from behind. With the numbers against Okada, as Beretta was still out from the Indytaker, he was ultimately sent packing by Fale and the Bucks. This was pretty heated, and a nice set up for their match at Invasion Attack.

Kota Ibushi & Tetsuya Naito vs AJ Styles & Yujiro Takahashi (15:12): AJ Styles pinned Tetsuya Naito with the Styles Clash. I didn’t feel this main event. There was limited interaction with AJ and Ibushi after the opening sparring, as both men started the match before bowing out to their partners. I’d say this was a basic tag team match, getting main event time while playing the part of a mid-card tag bout. I didn’t quite sense the urgency was there on Ibushi’s part to get in there to either weaken AJ for the title match, or show AJ exactly what he was capable of. Something didn’t click in this match, but there is no doubt that Sunday’s main event will be a far different situation. I’m excited for Invasion Attack, as I was going into this show. I don’t think this main did anything to further that excitement, so those on the fence about Invasion Attack may still be sitting on that fence. **1/4

After the match, it looked like we may get a stronger Styles-Ibushi confrontation, but Ibushi saved his decreasing energy for Sunday and walked off in defeat. Styles grabbed the mic to once more sell the main event on Sunday, while saying that Ibushi isn’t prepared to take on AJ Styles. It’s on this weekend at Invasion Attack!

Final Thoughts: The second half of this show was really good, and outclassed the first half. No surprise there, that’s how pro wrestling cards should work. The Tanaka-Komatsu opener was fun, but they usually are. In itself, that’s great, because to be placed together as often as they are and still find new ways to present their matches, that’s skillful. Go watch the ten man, and watch the main event for more of a primer on how good that Invasion Attack main event can be on Sunday. This was a fun show, easy to view without frustration, and worth the time for sure. Unless you’re Hiroshi Tanahashi, who obviously felt differently tonight as far as being worth the time. If you are Hiroshi Tanahashi, I apologize for saying that.

Oh, and if you haven’t heard, breaking news over the weekend: Yuji Nagata has developed a new contact lense… to make eyes white! 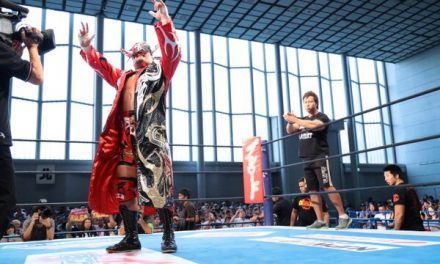 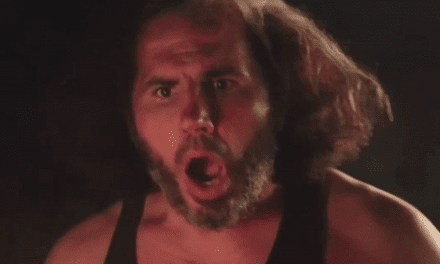 The Meaning in the Absurd Expression of The Final Deletion