Anybody who has said, “Hey, what ever happened to The Ascension?” over the last month or so immediately exposes themselves as a non-Superstars watcher (which also exposes them as non-readers of this column), since that is where Konnor & Viktor have been banished to ply their uninspiring craft of accidental 80’s tag team spoofery. The Ascension were so bad in Florida that despite a monster push, even the uber geek NXT fans, who will generally get behind anything homegrown and/or anti-RAW no matter how mundane or unimpressive (Blue Pants), basically eye rolled them all the way to the main roster. When they got to RAW, it took exactly one week for management to realize that the gimmick was dated (and that the men in the gimmick couldn’t pull it off effectively anyway), so they were altered slightly from an 80’s tribute act that dominated any and all comers, to an 80’s spoof act that bullied jobbers but stood no chance against any team with a pulse. This went completely over the heads of many fans, who amazingly and without any sense of self-awareness briefly rallied behind the fucking Ascension of all acts as the “Vince will never let an NXT act succeed!” martyr. The same fans who couldn’t stand watching The Ascension in NXT were annoyed that The Ascension were not getting a push on RAW, which can only be explained by “wrestling fans”.

Personally, I found the lumbering oafs who fancied themselves as the Road Warriors but were actually the Master Blasters far more interesting than the NXT version of the act, who were pushed like the Road Warriors even though we all knew they were Go Bots to the Roadies Transformers. The working standard on the main roster, where excellent working teams like Los Matadores toil on the undercard as the 4th or 5th string babyfaces and the Lucha Dragons are struggling to break through, would have quickly exposed a team like The Ascension, who have struggled badly in non squash situations. The delusional poser routine was really the best chance to carve out a mid card niche, which if we’re being honest is the realistic ceiling for both of these guys.

So after beating The New Age Outlaws at the Royal Rumble and a brief feud with Goldust & Stardust that was nothing more than a backdrop for the latter team’s break up angle, The Ascension disappeared to the bowels of the main roster, Superstars. I have no idea what our boys have been up to on the show that nobody watches, but with FOUR STRAIGHT WEEKS on hot Ascension action, come with me reader, because we’re about to find out.

1. The Ascension vs Prime Time Players – This was billed as The Ascension’s SUPERSTARS DEBUT. Respect for Superstars, I like that. No easy task the first time out, as they draw 2014 Superstars MVP Titus O’Neil, and the reborn Prime Time Players team. I think Darren Young is the worst male wrestler on the roster that isn’t a member of the Ascension, so hopefully at some point Titus tosses that dead weight through a barber shop window again and goes off on his own. An actual thing said by Rich Brennan: “Viktor is the technician of the Ascension.” I mean, I guess he’s not wrong, but that’s like calling Robbie E the technician of the Bro Mans.  Titus was absolutely vicious here with some nasty overhand chops and overall Titus brand stiff offense. This got real dry real fast when the Ascension took over, as they built to a Young hot tag. Young cleaned house (sort of), but got hit with a Fall of Man outta nowhere (Are they allowed to say that for someone other than Orton? Because they did) while the referee was ushering Titus out of the ring. This was real good when Titus was on offense, real bad when The Ascension tried to build heat, and I think Darren Young should take some days off so I can get some more Titus singles matches on this show. **

We’re told Adam Rose & Zack Ryder are having a Twitter war, and tonight we’re gonna settle that shit. Pffft, as if Twitter beef is ever settled. This will win my match of the year if they manage to work some passive aggressive sub tweeting into the match and somehow end it with one guy muting the other.

Ryder is shown doing the WWE “strut through the arena corridor with a creepy grin on his face while staring into space” thing. I imagine this is what I probably look like while power walking out of a random apartment after one of my late night Tinder mistakes.

2. Adam Rose vs Zack Ryder – I’d have bet real money last year that by this time this year Ryder would be teaming with Curt Hawkins and feuding with the Reynolds Brothers in PWS. I’d have also bet real money that Rose would have gone full heel by now, and I still think that a heel Rose has real upside, so hopefully it’s something still in the cards but simply on hold. Not much to this match. Mailed in effort with a long side headlock spot to kill time, one countered Rough Ryder for a near fall, and Ryder hitting a second attempt moments later for the win. Nothing to see here. *1/2

1. The Ascension vs Lucha Dragons – These teams had a pretty shitty match on an NXT special in September, and few other uninspiring bouts in NXT as well. This was better than anything they’ve ever done with each other, but almost entirely due to the work of Kalisto & Sin Cara. The same things that have always plagued The Ascension are still plaguing them on the main roster, most glaringly their uninspiring and boring offense, particularly during the heat building stage of the match. Working four way matches on the road and on TV as of late is not going to help them improve in that regard, because a four way match is a completely different kind of psychology. Kalisto, on the other hand, has looked much better on the main roster than he ever did in NXT. Sin Cara is a great glue guy and solid hand. Lucha Dragons picked up a win here, in a match with a very basic structure hidden by the very creative offense by Lucha Dragons. **1/4

2. Adam Rose vs Zack Ryder – Rematch, so based on previous Superstars booking patterns I was fully expecting a Rose win and a rubber match on the next show. That’s not a complaint. Veteran readers of this space know that I love the Superstars three match series gimmick, which has produced some super fun stuff with some cool match to match psychology. This is the show where the undercard guys really get a chance to sink their teeth into a program and be creative, even though so few eyes are actually paying attention. The cat Rosebud was back for this. I’m pretty sure i’d shave a few years off of my life to take a crack at that. Yowza. If not for the different set of Rosebuds, this could have been a tape of the match from the previous week and I wouldn’t have known the difference. They did the same exact sequence leading to the reversed Rough Ryder near fall, with the winning Rough Ryder coming moments later. That means no rubber match, which in this case is fine, because these guys mailed in the rematch and I have no desire to see a third. Very disappointing. *1/4. Docking a quarter star from the first rating for being lazy & uncreative in the rematch.

1. Adam Rose vs Jack Swagger – Byron Saxton explains that winning the Andre the Giant Battle Royal is a career changer. You can go right ahead and insert your own Cesaro joke right here. Rich Brennan notes that Jack Swagger is preparing for his seventh WrestleMania. This made me think. Do I recall a single Jack Swagger WrestleMania match, let alone six? That didn’t sound right, so I looked it up:

So Brennan was wrong, giving me another reason to continue my one man crusade to get Tom Phillips back on this show. Phillips gets facts right, makes references to past episodes, and doesn’t say WWE dictated wordy things like “As Superstars rolls on!”. And that’s probably why they replaced him.

Anyway, Swagger won a short, intense match that was essentially a squash. I enjoyed it. Swagger is very underutilized. **1/4

2. The Ascension vs Lucha Dragons – You know who does The Ascension better than The Ascension? Killer Elite Squad. Davey Boy Smith Jr is a better “technician” than Viktor, and Lance Archer is a better of whatever it is Konnor is supposed to be. Konnor really should be watching Lance Archer tapes to see exactly what he should be trying to get across in his role. I mean, even Vance Archer tapes would be a drastic improvement. Remember how I talked about boring control periods plaguing The Ascension? This match is exhibit A. They essentially take turns slapping a side headlock onto Sin Cara. Titus O’Neil needs to take Konnor into a room and teach him how to hoss. This built to a Kalisto hot tag, and boy was it HOT. Main roster Kalisto is the Samuray Del Sol the company signed, the one we only saw flashes of in NXT. Lucha Dragons won, carried it again, and like the previous week this was better than the matches these teams put together in Florida. These two bouts came off like a couple of prelim teams trying to work their way up the card, which is exactly what the D-show should be about. **1/2

1. Summer Rae vs Emma – Summer Rae used a  school girl on Emma after Emma went after Cameron on the apron (Summer Rae & Cameron are a tag team, for those of you who don’t watch the low level shows). This was an argument against longer Divas matches on RAW, as it was just a longer version of the same rushed match we always see, complete with lame finish. To be fair, this involved Summer Rae, who is awful, and she was in control for 90% of the match. Emma for her part sold her ass off. Look, this wasn’t sloppy or anything, but it just wasn’t good. Delete the tape. 1/2*

2. The Ascension vs New Day – Superstars even gets the B-team version of the New Day, as it was Kofi & Xavier here. New Day won a paint by numbers bore fest, but let’s talk Ascension. I hate to sound like a broken record, but these guys are lost and without a clue on offense. They run out of ideas within seconds of taking control of a match, which might the the worst possible weakness for a heel tag team to have. Konnor is completely useless. He shows no fire, conveys zero menace, and the number of unsigned indie guys who could more competently fill his role might number into the triple digits. It’s good that The Ascension are working every week on some form of TV, but what they really need is to work every night on the road with a veteran team who can teach them some much needed heel heat tricks of the trade. I don’t know if that team exists on the current roster. It isn’t any of the teams they faced in this report. A face turn is out of the question without massive repackaging. I have come out of this Ascension Odyssey with the same opinion that I entered it. The Ascension stinks. Bring back the delusional poser gimmick, because that’s the only thing that ever made these guys even remotely entertaining. ** 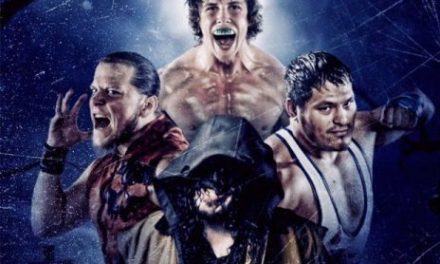 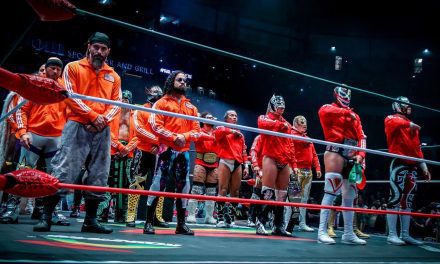 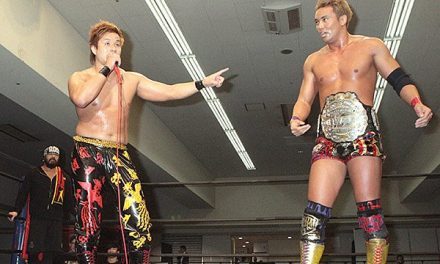