Rich Swann kicks off the show with a stirring rendition of “All Night Long” and when I mean rendition I mean the WHOLE song. This is standard “we’re still getting things together backstage” procedure. Hey, there’s worse ways to stall time.

A few minutes of stalling including encouraging a “We Are Awesome” chant followed until Swann finally kicked into gear. Swann talked about how he and Gargano (Ronin) lost at Evolve 40 only because the match was stopped due to Swann’s injury. Swann proposes a rematch with the Premiere Athlete Brand in April (when his ribs will be healed) but wants it for the Open the United Gate championships.

This prompts the Premiere Athlete Brand (So Cal Val, Andrea, Brian Cage and Caleb Konley) make their way down to the ring. Conley and Cage attack Swann’s ribs but are run off by Ethan Page and Johnny Gargano. Page takes his shirt off and tells Caleb Konley to do this now and we have our first match ready to go.

Ethan Page vs. Caleb Konley: I wasn’t in love with this. I’ve always been a fan of Page but he didn’t have a great weekend and this match didn’t do him any favors. Konley is much improved but had a sloppy, awkward match with Page here. Sometimes it just doesn’t click, oh well. Cage mistakenly clotheslined Konley which led to a Page roll-up, a little hold of the tights and a win. (Page is a face, by the way). *¼

Post-match, Conley, Val and Andrea beat up Cage presumably kicking him out of the Premiere Athlete Brand.

SHINE Champion Mia Yim & SHINE Tag Team Champions Kimber Lee & Cherry Bomb vs. Nikki Storm & The Canadian Ninjas of Nicole Matthews & Portia Perez: Before we got started, the Premiere Athlete Brand’s Andrea attacked Nikki Storm and took her spot — seems reasonable. Nice fast pace to start us off as Mia Yim and Cherry Bomb really stood out. When the heel team (Andrea, Matthews, Perez) started their heat segment, the match stretched to a hault. Thankfully Yim found her way back into the ring and the last few minutes were solid. This had a good pace and it got the crowd out of their malaise which was much needed after the lackluster opener. **

After the match, Nikki Storm ran back down and challenged Andrea for SHINE 26 April 3 in Ybor City, get your tickets today.

EVOLVE Champion Drew Galloway made his way down to the ring to talk about re-inventing himself. He says he has to catch a flight at 8:55 back to Scotland so he calls DGUSA champion Johnny Gargano out and we’re going old school WWWF MSG house show here as our main event will be the third match of the night.

Champion vs. Champion – EVOLVE Champion Drew Galloway vs. DGUSA Open the Ultimate Gate Johnny Gargano: Lenny Leonard makes sure to specify that this ISN’T a title unification match. Instead, one man will hold both titles. Whatever you say, guys!

The first 15 or so minutes of this match were pretty rubbish and straight Attitude Era-style (that’s not a good thing). The two started brawling in the crowd where unfortunately it was so dark we couldn’t see much of the action. Once the two got in the ring we got two separate ref bumps which seemed unnecessary at the time and later so when the last five minutes of the match was exactly what people wanted.

Gargano had a chance to use the GARGANO ROPES he used the prior two years in the DGUSA championship match, but decided to win it fair and square. Galloway and Gargano traded some super close near-falls before Galloway hit a Spike Piledriver to win the DGUSA Championship. This should have been a monumental moment in WWNLive history and while the live crowd loved it, it didn’t come across great on iPPV. It was far too much of an Attitude Era match with early in-crowd brawling, ref bumps and a hot last five minutes. I didn’t hate it as much as others but I wasn’t in love, definitely disappointing given my expectations. ***

After the match, Galloway cut a great promo talking about how this was his WrestleMania moment and so on. Gargano was getting a “Thank You Johnny!” chant when his young boy Ethan Page turned on him. Page said he was going to end Gargano’s WWNLive career.

Tommy End vs. TJ Perkins vs. Drew Gulak vs. Biff Busick: I enjoyed this a lot even if it was a bit sloppy at the beginning. Everyone was working fast and hitting high-impact moves throughout the match which keep the crowd going throughout.

Tommy End blew a few obvious spots throughout but also looked like one of the best guys when it was all said and done. I’m intrigued by his prospects moving forward and can’t wait to see him working more dates in America. Perkins eventually won forcing Gulak to tap to the cross-arm breaker. There were a million moves in-between as this resembled more of a Dragon Gate proper match than anything else this weekend from WWN. My early favorite for match of the night. ***½

AR Fox vs. PJ Black: Super spotty to start as both men showed their high-flying prowess. I won’t complain because that’s exactly what I wanted out of these two and this event needs a jolt of energy. It’s hard to pick out any one or two spots here as it was all pretty crazy but it worked as a fun back and forth. Black (who’s had a great weekend) hit a top rope Death Valley Driver to Fox who landed on the apron. Thankfully this was the finish as Black immediately got the fall on Fox for the victory. Sorry, four-way, we have a new Match of the Night. ****

Chris Hero vs. Timothy Thatcher: Though I’ve never been a fan of Thatcher’s style, I had high hopes for this match. I love Chris Hero and the thought of a blended grapping/mat-work match with Hero’s striking had big appeal to me. Well, I was right to be excited. This was really fucking great and my easy Match of the Night. When it’s all said and done, it may be my match of the weekend. The match started with insane heat from the WWNLive crowd as they dual-chanted “Let’s go Thatcher!” &  “Let’s go Hero!”

The first half of the match was very much Thatcher’s game as Hero tried to show his merit as a groundworker but couldn’t really get anyway. Nor should he, that’s not his forte. Halfway through the match, Hero started incorporating more of his striking, rolling kicks, rolling elbows, etc. and began getting the upper hand.

The finish here was nothing short of spectacular. Hero hit four roaring elbows as Thatcher collapsed. Hero struggled to turn Thatcher over and get the pinfall. Thatcher immediately struck, locking in the Fujiwara Armbar and getting the immediate tap out. ****½

Austin Aries & Roderick Strong vs. Ricochet & Uhaa Nation: Strong and Aries are teaming up for the first time in a number of years to take on the high-flying duo of Ricochet and Uhaa Nation. I’m not sure if it was me being tired, having to follow a string of great matches or this match but I had a tough time connecting with it. It wasn’t bad, quite the opposite, as all four shined in their own special way. Strong & Aries looked really good while Ricochet & Uhaa had their own bit of fun throughout the match.

Eventually, Strong got the pin on Ricochet as Generation Next picks up the win. Fun match and a good way to close what ended up being a great show. ***¼

Roddy grabbed the mic afterwards and praised both Uhaa and Aries. This was about to be a nice moment but, nope! Roddy turned on both men, called out Galloway but Thatcher ran down and chased Roddy literally out the front door.

Final Thoughts: This was looking like a lackluster show after the first three matches, especially when the promoted main event went on third and disappointed. Mercury Rising 2015 is why you have to sit through the whole movie. The rest of the card bordered on good to great with a match I’m sure will get Match of the Year votes in Thatcher vs. Hero. All in all, a good show that you should go out of your way to watch. If you skip the first three matches, you honestly won’t miss much. 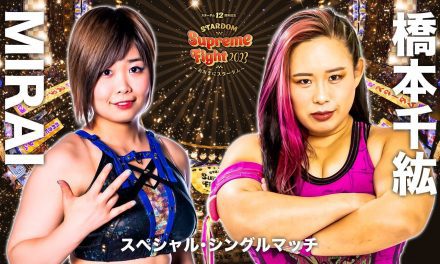