We are back in Baltimore, Maryland for the latest episode of Ring of Honor TV. Kevin Kelly and Steve Corino begin the show promoting tonight’s main event:  Jimmy Jacobs vs. Jay Briscoe for the ROH World Championship. But first, one half of the ROH World Tag Team Champions is on his way to the ring.

Bobby Fish vs. Roderick Strong:  ROH is not using their television to build to this weekend’s Supercard of Honor IX, as they normally would with a traditional pay-per-view. Of course, I suppose many people will see next weekend’s episode before the show, though I won’t see it till Monday. This match is a great example of the lack of a build to Supercard of Honor considering Fish and reDRagon will take on The Kingdom and Roderick Strong will wrestle Christopher Daniels. So this match is a completely random pairing, though relative freshness is always appreciated.

This actually turned out to be a pretty fun match. There wasn’t much of a story to it but these guys can obviously both wrestle. It wasn’t what you would normally think of a “spotfest” as there were very few high spots. It was mainly two guys showing off their pro wrestling ability. Corino and Kelly tell us that Fish and Strong are both into CrossFit and like to compete to see who is in better shape. I can’t imagine Strong is winning too many of those competitions.

Strong controls most of the match with Fish getting in bits of offense here and there. As we get toward the end of the match, there is a nice spot as Strong superplexes Fish then immediately picks him up into a fireman’s carry and hits a double knee gutbuster. They get to their feet and begin an exchange of forearm strikes. Even with Bobby Fish’s MMA influence, this was not a particularly impressive exchange. These forearms were extremely lacking in stiffness. Fish audibly calls the spot to end the forearms. Fish gets the advantage with a couple of kicks to the legs but then misses a big roundhouse kick. Strong off the ropes and he hits the Sick Kick and the Strong Breaker for the pin. ***

ROH TV Championship Match – Jay Lethal (c) vs. Donovan Dijak:  This is a match I’m genuinely interested in seeing. Lethal has gotten better and better during this TV title run and Dijak appears to have some potential. Dijak is vaguely goofy looking though. In his promo picture, he legitimately looks like Beaker. I’m not sure why someone didn’t suggest they reshoot that one. Though perhaps it’s better than his normal look. He reminds me of the 30-year-old guy who still tries to show up to frat parties.

Martini grabs the mic and cuts a somewhat rambling promo. Even Jay Lethal looks bored. Eventually, he gets to the point and invites Dijak to join The House of Truth. Dijak hesitates but eventually grabs Martini’s hand and gives up his shot at the TV title to join Martini, Lethal, and Diesel. NR

The House of Truth poses with its newest member. It is a somewhat odd pairing as Dijak’s 6’7″ frame highlights how small Jay Lethal and Jay Diesel are. However, we don’t get much time to consider that as some strange music hits. Out comes Dalton Castle with the same elaborate entrance he used during the Top Prospect Tournament, complete with two slave boys. I spent way too much time trying to decide on a better descriptor for the gentlemen who accompanied Castle but that’s the best I can do.

Castle makes his way to the ring and unveils his entrance gear, which is vaguely similar to Steamboat’s “The Dragon” attire. Castle cuts a promo saying he wants the match with Lethal that Dijak passed up. As he speaks, one of the slave boys gets on his knees so Castle can sit on him and lounge back on the other slave boy. Lethal declines the challenge and starts to make his way out of the ring. Castle says fine, he’ll just challenge Jay Briscoe, a real champion. This infuriates Lethal who attacks Castle, which causes the bell to ring and a match to begin.

ROH TV Championship Match – Jay Lethal (c) v. Dalton Castle:  The crowd seems to like Dalton Castle. I must admit that, for the life of me, I cannot understand why. Castle appears to me a strain of the disease of hipsterism that has infiltrated pro wrestling. I’m not in league with Jim Cornette or anything here; I just do not understand the appeal of characters like Castle. Self-aware irony is not something I’m looking for in a wrestler. There is a place for comedy in wrestling but like in comedy in other forms of entertainment, the funniest characters do not realize they are funny. They are real people who live their lives and they happen to be funny. When the character (or the wrestler) is trying to be in on the joke, I find it cringeworthy.

It’s a shame too because Castle showed here that he is a good worker. He uses interesting and creative offensive moves. His punches are kind of rough, though. As for the actual match, Lethal is mostly in control. With the ref distracted and Castle on the apron, Dijak grabs Castle and hits an awkward Feast Your Eyes before throwing Castle back in the ring. Lethal hits the Lethal Injection for a three count. **1/2

We do get some build for Supercard of Honor as Lethal taunts a superfan standing in the front row dressed as Jushin Liger. Take all my money!

Before the main event, there is a promo video featuring reDRagon. As Fish gets going, the KRD appears to hack into the video, Solomon Crowe style. That’s it.

ROH World Championship Match – Jay Briscoe (c) vs. Jimmy Jacobs: Not that Jimmy ever looked like Finn Balor but he may have given up on weight training and nutrition now that he’s joining WWE Creative. I can’t say I was looking forward to this match at all but it definitely exceeded expectations.

We brawl in and outside the ring to start. Predictably, Briscoe is a slightly better brawler than Jacobs. However, Jimmy gets some fun offense in occasionally. Outside the ring, he jumps up on the barricades, facing away from Briscoe, and jumps backwards toward him, catching Briscoe in a Diamond Cutter. The two end up back in the ring with Briscoe on his knees. Jacobs slaps Briscoe a few times. There is no way to describe these slaps other than effeminate. In an awkward but hilarious moment, Corino announces that the more you slap Jay Briscoe, the harder he gets!

The brawl continues and we eventually get Briscoe and Jacobs up on the second rope. Briscoe hooks both of Jacobs’ arms, setting him up for a super-Jay Driller. However, he’s apparently unable to lift Jacobs(?) so he switches to a backdrop that somehow ends with Jacobs getting the advantage and going for the pin. He gets a two count. This demoralizes Jacobs, who leaves the ring. However, he sees the ROH championship belt, grabs it and looks at it for a minute, and gets back in the ring with a new energy.

Jacobs gets back on the second rope and hits a jumping Diamond Cutter. Then, Jacobs spears Briscoe, which I think is a hilarious move for Briscoe to sell for Jacobs. Nonetheless, Jacobs locks in a choke hold. Briscoe struggles to his feet. They go back and forth with Jacobs being able to get in a couple of pin attempts. But seemingly out of nowhere, Briscoe hits the Jay Driller to end Jacobs’ title hopes. ***1/4

Jacobs apparently got busted open sometime during that last exchange. He is bleeding heavily from above his left eye. There is blood all over Briscoe’s head, which is spilling down to his face. Jacobs looks like he’s about to cry. They both make it to their feet and Briscoe holds out his hand for a handshake. Jacobs hesitates for an extended period of time before finally offering his hand to Briscoe.

This was a good match. It had more of a story but less wrestling skill than the Fish/Strong matchup that started the show. Some of the psychology was off as it was pretty hard to believe Jacobs could do anything in a brawl against Briscoe but it still ended up being very enjoyable. Definitely worth checking out.

Final Thoughts:  As long as you’re not looking for something to get you excited for Supercard of Honor IX, this was a good episode of ROH TV. All three matches are quality with Briscoe/Jacobs being worth seeking out.  Luckily, there was much less KRD involvement than the last episode. But their continued representation means that angle isn’t going anywhere. Regardless,  the in-ring action next week should be even better with Samoa Joe vs. Kyle O’Reilly as the advertised main event. 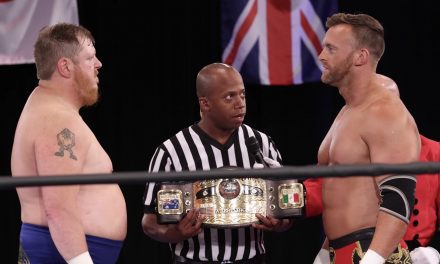 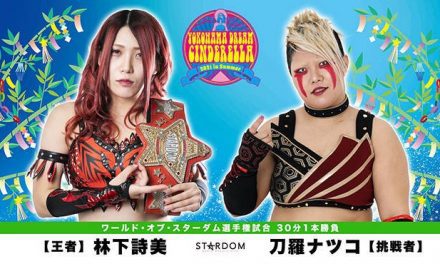 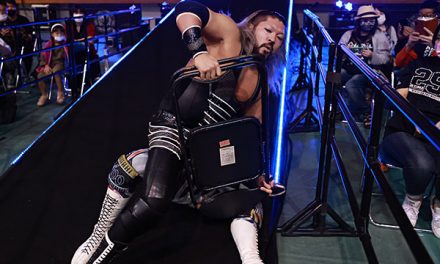