TNA World Tag Team Championships – The Wolves© vs. Jessie Godderz and DJ Z vs. Sanada and Manik – Ultimate X:  Kicking off a show with Ultimate X is nice but it’s been a very long time since we’ve had an Ultimate X match that actually meant anything. These days it’s always thrown out randomly like this for no real reason. The last Ultimate X that mattered was Styles and Daniels vs. LAX in 2006 (used in that instance to help try and take the feud to the next level). They haven’t protected the gimmick at all which is a shame because it’s their only real unique match they present.

The Wolves ran wild early hitting a bunch of double team moves on everybody punctuated by a huge hip toss on DJ Z to the floor. Jessie Godderz throws a really good dropkick. Not quite Okada good obviously but it’s good. The BroMans briefly worked together with The Revolution to take out The Wolves but Manik soon betrayed Jessie and tried to climb for the belts. Jessie took Manik off the cables with a big dropkick and then took out Manik with a neat backbreaker/spinebuster combo.

Jessie and Zema tried a variety of ways to get the belts without climbing the cables. This resulted in Zema on Jessie’s shoulders and Manik on Sanada’s shoulders fighting over the belts. The Wolves took out all four with stereo dropkicks. That was a cool spot. The Wolves pulled Manik off the cables into a Powerbomb/backstabber combo. Zema got trapped in the metal structure which holds the cables. Sanada blinded Godderz with the mist but Edwards stopped him from climbing. Edwards hit a big hurracanrana followed by Hammer of the Gods and The Wolves picked up the win. Not a very climactic finish and not among the better Ultimate X matches. **1/2

5. Bound For Glory 2009 – Alex Shelley vs. Chris Sabin vs. Suicide vs. Christopher Daniels vs. Amazing Red vs. Homicide

The Bound For Glory match is notable for Kaz and Daniels nearly killing each other. The Victory Road match is just full of cool stuff (including a bonkers cutter from the cables). Weekly PPV 59 is the very first. No Surrender 2006 is two teams with great chemistry having a great match, notable for Daniels leaping half way across the ring to grab the titles (Daniels and crazy Ultimate X stuff tend to go hand in hand). And the Final Resolution match is far and away the best ever Ultimate X match, and my third favourite match in TNA history (behind Triple X/AMW and Styles/Daniels/Joe).

Austin Aries vs. Samoa Joe: Aries wants his stolen Feast or Fired briefcase back. Low Ki and Joe entered. Aries wanted a match with Low Ki but got a match with Samoa Joe instead. This is Joe’s last match in TNA. I wrote about Joe’s time in TNA when the news broke which you can read here. Joe dominated for a while before Aries came back with a missile dropkick followed by the IED. Joe reversed a Brainbuster attempt into an arm bar but Aries reached the ropes. Joe escaped a Muscle Buster and hit two discus forearms followed by the Heat Seeking Missile before Low Ki interfered for a very lame DQ. **1/4

BDC miscommunication resulted in Low Ki and Joe being laid out with the briefcase. And here comes Rockstar Spud. Spud is cashing in his X-Division title shot.

First the good, it’s nice that after last week Spud got his big moment in his home country after a tremendous performance. But while this was the moment Spud got, it wasn’t really the moment Spud deserved. Because last week he earned a real moment. Not another slip on a banana peel win. Here he’s still a joke, a punchline who can only win by fluke. Last week should have earned him the right to be a serious wrestler. Yes, he can still wear his goofy suits. Yes, he can still occasionally be a bit of a buffoon. But in the ring he should be taken seriously. Otherwise his character is never going to move forward. An earned victory would’ve meant so much more here.

Bram and Magnus were brawling backstage. They brawled out into the arena. Magnus grabbed a chair and went to town on Bram. Mickie James came out and kicked Bram low. Magnus hit a big Powerbomb on the ramp. That didn’t look pleasant at all.

TNA Knockouts Championship – Awesome Kong vs. Gail Kim vs. Taryn Terrell©: Taz had forgotten entirely about when Taryn Terrell was a referee which segued into the Taryn/Gail Kim feud. They attempted to double team Kong early but Kong dominated. Kong threw Gail into the post while Taryn finally took Kong off her feet with a crossbody. Kong escaped a Taryn Cutter but missed a middle rope splash. Taryn hit the Taryn Cutter but Kong kicked out. Gail took Kong out with a top rope splash to the floor. Gail hit a sunset flip Powerbomb for two. Taryn revered Eat Defeat into a roll up for the win. **3/4

No Disqualification – Matt Hardy vs. James Storm: I really don’t like James Storm’s growly promos. Standard weapons match fare with extra helpings of interference. Storm hit a superplex through two chairs for two. Storm introduced tacks but got pushed into them. Hardy hit a top rope elbow for two. Hardy hit Twist of Fate but Abyss pulled the ref out. Hardy took out The Revolution but Storm sidestepped a charge into a chair for a near fall. Hardy hit another Twist of Fate but couldn’t capitalise. Abyss gave Storm a cowbell, Sanada blew mist into Hardy’s eyes, followed by a owbell shot followed by two Last Calls for the win. Like all matches like this it would’ve been better off if they didn’t happen so often. **1/2

TNA World Heavyweight Championship – Kurt Angle vs. Bobby Lashley©: They did really good videos throughout the show on the match with people predicting the result, which would’ve been much more useful on the last few weeks of shows. Exchange of holds early which Lashley got the better of with his strength. Angle caught Lashley with a Belly to Belly and unloaded with some German suplexes. Angle locked on the Ankle Lock but Lashley quickly reached the ropes. Lashley dropped Angle on the guardrail and hit a back elbow to take advantage. Angle looked to come back but Lashley leapfrogged him and hit a clothesline.

Angle hit a shoulder tackle from the middle rope and unloaded with German suplexes. Crowd are pro Angle, anti-Lashley. Lashley hit a spinebuster for two. Angle hit five more German suplexes and the straps are down. Angle grabbed an Ankle Lock but Lashley rolled through. Running powerslam was only worth two for Lashley.

Lashley missed a Spear and Angle rolled him into an Ankle Lock but Lashley rolled through again. Lashley looked for the Spear but Angle booted him in the face and hit an Angle Slam for a near fall. Angle charged but got dropped with a clothesline followed by a suplex. Lashley finally hit the Spear but Angle kicked out at two. Angle is really, really awesome at last second kickouts.

Lashley went up top and Angle looked for a top rope Angle Slam but Lashley shrugged him off. Lashley missed a frog splash and Angle hit a crossbody but Lashley caught him and rolled into an Ankle Lock on Angle. Angle reached the ropes. Angle hit a second Angle Slam but Lashley kicked out again. Lashley grabbed a cross armbreaker but Angle reversed into an Ankle Lock and Lashley eventually tapped making Kurt Angle the new TNA World Heavyweight champion. Angle as champ likely sets up EC3 eventually beating him for the title. ****

The main event was very good but just a step below great, a few more minutes and they might have gotten there. This was another very enjoyable show. I preferred last weeks, less pointless gimmick matches and it was better paced, but this was a good show. And so ends TNA’s shows from the UK. Last year when TNA went from solid UK shows (though they weren’t as good as this year’s shows), returned to Orlando and everything fell apart. Without strong crowds that could easily happen starting next week, unless the content is really good in the first place (because no doubt a lot of what happened on the last six weeks of TV was buoyed by a strong crowd). We’ll see what the show looks like next week and see did they actually learn anything from how well people responded to last week’s show. 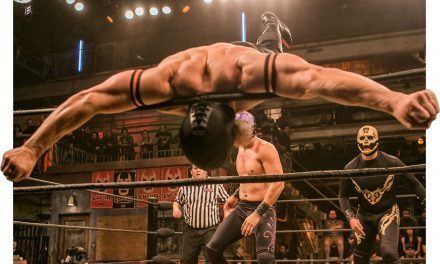 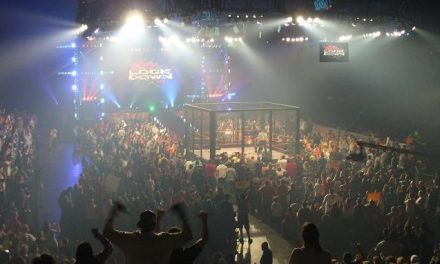 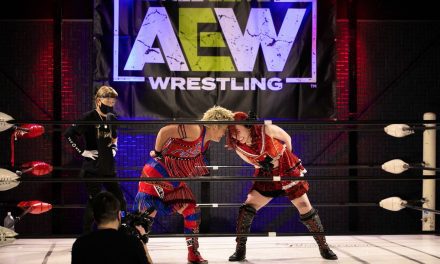