Sorry I missed last week (I was on a much-needed vacation in South Carolina) but I’m back now and ready to get back on the NXT grind. The show opens with an introduction to the Arnold Sports Festival and all the fun involved with it (fan tryouts, seminars, etc.) but more importantly, we get a preview of Kevin Owens vs. Alex Riley and Ohio’s own Alexa Bliss vs. NXT Women’s Champion Sasha Banks. It’s being promoted like a big show tonight so let’s get right to it.

The arena looks great as they are packed in and certainly loud, NXT is on fire right now and for good reason, it’s one of the simplest and best products being put out in America right now. Little bit of an odd look as we have fans on the hard cam side, so people used to the same old WWE production this will certainly shock the system. It’s funny how minor changes to their 15-year-old production standards sticks out like a sore thumb.

Tyler Breeze vs. Kalisto: We a “It’s a Happening here in Columbus” from Rich Brennan, RIP Gorilla. Crowd is way behind Kalisto from the beginning though there’s a smattering of cheers and a few chants for Breeze. Brennan also says Tyler Breeze’s feet were “8-10 feet in the air” when he countered a dive from the top into a superkick. Thankfully, Jason Albert quickly cut him off and said “I don’t think they were 8-10 feet in the air.” Thanks Mr. Bernard.

Brennan and Albert really setting the stage for how big of a deal it is for NXT to be out of Florida, in front of new fans. Tyler Breeze locks on a, YOU GUESSED IT, headlock as we go to commercial.

Back from the break, we get a series of near-falls as Breeze does everything he can to stop Kalisto who keeps getting up. Kalisto hits a beautiful 450 but Breeze grabs the ropes at 2.9999. Breeze transitions from a Salina Del Sol attempt into a Beauty Shot and picks up the win. This was a real solid opener. **¾

Great recap video about the Kevin Owens vs. Alex Riley feud. This mini-feud is another fun aspects of NXT in that they can have these 2-3 week mini-feuds in-between larger feuds. Best of all, this feud was simple. Owens is a dickhead who stopped at nothing to win the title, even if it was putting his former best friend out of action. Riley calls him out on it and Owens defends his honor. Owens truly believes what he’s doing is right (see: being an actual heel) and Riley sees through the bullshit.

Regal tells Alex Riley he has to earn a shot against Kevin Owens so he wins some matches and now he has his opportunity. NXT may have a ton of random squash matches but almost everything matters and make sense in the larger picture. They respect that their audience is smarter and has standards so they play to that. Have I said how much I enjoy NXT lately? I did? Oh, okay, well, it’s true.

Backstage, Alexa Bliss says she’s excited to wrestler in her home-state of Ohio and is coming fro Sasha Banks. This transitions into a look at the Arnold Sports Festival which is a super cool event if you’re into any aspect of athletics, bodybuilding, fitness, etc.

Wesley Blake vs. Colin Cassady: If you don’t enjoy how generic and goober-ific Blake & Murphy are, well then I just can’t help you. They are great and if you don’t get it, you’re the problem, not them. There’s some irony in Cassady calling people out for being S-A-W-F-T…SAWWWWWWFT when his midsection is increasingly, well, you get where I was going.

Cassady controlled almost 100% of the match but Blake stole a win when Cassady knocked Carmella off the apron. This was just kinda there, not bad, not good, just…there. *½

Alex Bliss vs. Sasha Banks: Banks did all she could her but this was her worst match in quite some time. Bliss is still real rough around the edges and has a long way to go before she’s at the level of a Banks, Becky Lynch or even Bayley. Bliss eventually won via countout. The two were fighting on the outside when Bliss launched Banks into the ring post then rolled into the ring at the count of 9. *

Backstage, Alexa was way too happy about her banana peel win. Sasha barges in and currently asserts that Bliss never pinned her. Hey, it’s cool because we have an NXT Women’s Championship match next week between the two.

Alex Riley vs. Kevin Owens: Owens gets a superstar reaction — it’s amazing what they’ve been able to do with him in such a short amount of time while not changing a single thing that made him great on the indies.

This was pure destruction from Owens. It was almost uncomfortable how much Riley was getting decimated here. Ol’ A-Ry got a spinebuster and a two count, that’s cute. Other than that two count, this was total destruction and made Owens look like a million bucks. Owens won with the Sit-Up Powerbomb. **1/4

After the match, Owens started attacking Riley until Finn Balor’s music hits. Finn walks down and points at Owens, these two will fight for the NXT Championship next week. Balor turns away which prompts Owens to lift Riley again,  Balor turns around quickly and dives off the entry way and we got ourselves a PIER 6 BRAWL! Balor launches Owens into the steps and tosses him in the ring. Balor hits the flying dropkick and hints at the double foot-stomp but Owens rolls out of the ring and to the back. This is going to be fun next week.

Final Thoughts: Solid episode. The women’s match was a little disappointing but watching Kevin Owens destroy Alex Riley and a hot opener makes this worth a watch. 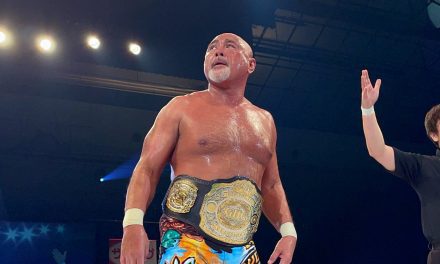