This is another episode from the tapings at ECW Arena. Kevin Kelly and Steve Corino are on commentary, as usual, and they tell us that this episode will feature a defense of the ROH Tag Team titles and the finals of the 2015 Top Prospect Tournament. But before that, we get some cold tag team action.

The Addiction (“The Fallen Angel” Christopher Daniels and Frankie Kazarian) vs. The House of Truth (Jay Lethal and Jay Diesel with Truth Martini): This match saw The Addiction generally in control until Lethal and Diesel would find a way to use some underhanded tactic to gain the advantage. However, The Addiction would find another way to outsmart the heels and regain control of the match. Whenever Lethal was involved with Daniels or Kazarian, the match was smooth. However, Jay Diesel still has work to do. His exchanges were often slow and sloppy. Most hilariously, at one point Diesel was apparently standing on the wrong side of the ringpost. Lethal had to instruct Diesel to move to prepare for an upcoming spot. Again, Daniels and Kazarian outsmart the House of Truth as Lethal accidentally hits Diesel with a pescado. Finally, it appears as if Daniels is going to finish off the match but one of the red-masked members of the Knights of the Rising Dawn is lying across the top turnbuckle. Though Kelly and Corino have acknowledged that this episode takes place after the 13th Anniversary show, Kelly comments that this is the closest a KRD member has gotten to the ring. Anyway, Daniels is distracted by the KRD member and Jay Lethal gets a rollup for the pinfall. This is ultimately a skippable match but The Addiction and Lethal are always entertaining. **3/4

Leading into the finals of the Top Prospect Tournament, we get a video packaging recapping the entire tournament.

Donovan Dijak vs. Will Ferrara: Dijak is a large human being, listed at 6’7″. Ferrara, however, is a regular guy at about 5’9″. Of course, the story of the match is the classic size versus heart battle. At the beginning of the contest, Ferrara tries everything to try to take down Dijak but he doesn’t seem to have enough strength. Dijak dominates the first several minutes. Ferrara does get Dijak grounded momentarily before Dijak’s size and strength take over again. Brutal Bob from the ROH Dojo comes down to the ring to watch. His entrance is followed by staggered entrances for Veda Scott and Stokely Carmichael, Truth Martini, and The Decade. Once everyone is out to watch, this match really stepped up in intensity. Dijak hit a very impressive springboard moonsault off the second rope to the outside. He’s obviously outrageously athletic. As we get close to the finish, Dijak goes for his finisher, Feast Your Eyes, which is an inverted Go to Sleep. Ferrara wiggles out and rolls Dijak up for two. Ferrara has control for a brief moment, during which he slaps Dijak a couple of times and then goes for his finisher, which is called Eyes Wide Shut. Dijak blocks it and hits Ferrara with the Feast Your Eyes to win the 2015 Top Prospect Tournament. This match is worth checking out. Dijak is impressive in the ring but there is just something lame or vanilla about him. I’m not familiar with him outside of what I’ve seen in ROH but I’m hoping he has more charisma than it appears he does. ***1/4

After the match, all of the observers make their way into the ring. It appears that everyone is making their pitch for Dijak’s services except for Truth Martini, who climbs up on the ring apron but then jumps back down and exits. There is no resolution at this point as Dijak simply turns away from everyone and climbs to the top rope to pose.

ROH Tag Team Championship Match – ReDRagon (Kyle O’Reilly and Bobby Fish) (c) vs. The Decade (BJ Whitmer and Adam Page): The Decade attacks ReDRagon before the introductions but ReDRagon quickly takes control of the brawl on the outside of the ring. As the actual match begins, Kelly and Corino put over ReDRagon based in large part on their run in New Japan. Kelly and Corino focus on the argument that ReDRagon is the best tag team in the world because they wrestle (and defeat) so many different teams in Ring of Honor and in New Japan. I have to say though that all I can seem to draw from my recent memory of both companies are matches against The Young Bucks. ReDRagon dominates Adam Page until O’Reilly attempts a baseball slide to the outside to BJ Whitmer and ends up stuck in the ring apron. That miscue leads Whitmer and Page to take complete control of the match for awhile with O’Reilly stuck on The Decade’s side of the ring. This exchange includes Whitmer putting O’Reilly in a headlock and blowing kisses to Bobby Fish, who is on the apron.

Throughout the match, the focus seems to be that The Decade has the advantage as long as BJ Whitmer is involved, which is a pretty strange way to book all parties involved. Even when ReDRagon gets the advantage, it seems to be because Whitmer is selling on the outside. O’Reilly and Fish set up for the Chasing the Dragon but Whitmer pops up just in time and pulls Bobby Fish out of the ring. The finish was fun as Adam Page attempted a standing shooting star press but O’Reilly caught his arm in the air and locked in a cross armbreaker. Page doesn’t give up the fight immediately as he uses his leverage from standing up to get O’Reilly’s shoulders down for a pin but only gets a two-count. After O’Reilly kicks out, he uses his legs to get Page down to the ground and locks the cross armbreaker in even tighter, forcing Page to tap. This is worth a watch. ***1/2

Post-match, BJ Whitmer pours a bottle of water on Steve Corino. Corino is furious and jumps into the ring to go after Whitmer. In the fracas, he pushes a young kid on the ring crew. This leads to everyone being separated. Corino appears apologetic as he finally climbs out of the ring and storms to the back.

Final Thoughts: This was a normal, solid episode of ROH TV. I don’t really care at all about any type of build including the KRD or Corino/Whitmer but all of the in-ring action was worth checking out. Of course, the in-ring action should really be stepping up soon as episodes begin to feature matches from the shows in Atlanta and Milwaukee, including Samoa Joe’s return to Ring of Honor. Thank you for reading my first review of ROH TV for Voices of Wrestling and I look forward to continuing to bring these reviews to you each week for the foreseeable future. 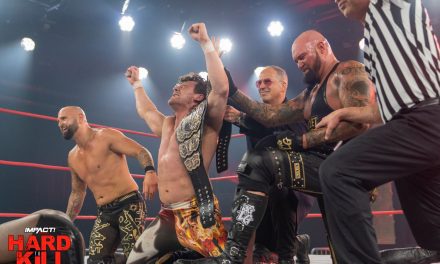