Editor note: EVOLVE 38, which was advertised as an Internet PPV, was scheduled to begin at 8:00 PM EDT. Due to a previously scheduled show in the same building running late, this show actually began at 8:30 PM. Match that with a 45 minute delay in setting up the cage for the main event, there was quite a bit of down time for those attending live and watching online. If you were one who attended the show, or watched online, please leave a comment or visit our FORUMS and let us know about your experience!

Biff Busick vs. Martin Stone: Martin Stone really knew how to wow an American indy audience. One minute into the match he put Biff Busick into a rest hold. And yes it was a chinlock. The slow start was easily forgiven when both men started to knocking the hell out the other. The crowd and both performers were getting worked into a frenzy. Busick locked in a choke…and Martin tapped immediately. A good opener once they got going. That slow start and abrupt finish though. **

Team Tremendous (Bill Carr & Dan Barry) vs. Earl Cooter & Jody Kristofferson: Team Tremendous gimmick is that they are cops. They wrestle in a suit and Hawaiian shirt respectively. Both are big dudes. Both are big dudes who can do flippy stuff. Combine these things and the fans will be eating out of their hands. Which is exactly what happened and in the end Team Tremendous went back to the prescient winners via a Doomsday Sliced Bread. Carr and Barry’s work woke the crowd up after the late start and disappointing opener. They will be a welcome addition to the EVOVLE tag team division. ** ½

Matt Cage vs. AR Fox: Cage says he is the money. Damn straight, Mr. Cage. A staple of the Midwest scene, Cage killed it with AR Fox in his EVOLVE debut. Make no mistake about it this was a videogame match. Neither guy sold a lick. Nor was there any coherent narrative, but how cares. Two athletes went out and put on a spectacle that made the price of the show well worth it. Fox won with a gorgeous 450 Splash. This was an absolute blast of a match and a great debut for Matt Cage. *** ½

Drew Gulak vs. Chris Hero: Before the match, Gulak cut a hell of a promo denouncing sections of the roster for focusing on style over substance. Preach it Brother Gulak! Hey, it turns out Gulak is no hypocrite. He practiced what he preached and used a combination of holds and strategy to neutralize Hero’s famed striking. That Young Knockout Kid did not let Gulak’s wrestling savvy deter him from using is legendary offense though. As the combat wore on Gulak did his best to out hit his opponent which turned out to be a big mistake. Hero throttled Gulak’s head with elbows and then dropped him on it with a Tombstone for the victory. This style of match is not a popular one. Personally,  I enjoy methodical matches and thought this one was high quality. *** ¾

After his victory, Hero gloated and taunted Biff Busick by saying Biff had no right to say his name. Busick did not take this kindly and came out to confront Hero. The two came to blows before Hero hightailed it to the back.

PJ Black vs. Kaleb Conley: I have a confession… I spent the majority of this match wondering what the hell happened to Kaleb Conley’s hair. As far as the contest itself it was fine. PJ Black needs a little more seasoning on the independent scene. He did work hard though and that is very commendable. Credit to Black for getting the win with a spectacular Springboard 450 Splash. A little slow at times but both guys worked hard to put a decent match. ** ¾

Davey Richards vs. Tony Neese: I’ve seen Davey Richards wrestle this match so many times. The holds in the beginning, the strikes in the middle and the submission or kick extravaganza at the end. You know what though, I dig the fight every time. Davey looked like he had a lot of fun in the ring tonight and the result was another terrific match on a very good show. Neese hung with one of the very best in the world tonight and should be proud of himself. A lot of people will question the decision for Richards to go over but in my opinion it does not matter. Tony Neese is already a star in the WWN world and looked just fine in defeat. If you’re not a Davey Richards fan I doubt you will find viewing this match pleasurable. Now, if you are like me and enjoy his work seek this one out. *** ¾

Main Event: Roderick Strong vs. Drew Galloway, Steel Cage Match: Roderick Strong has been a great chicken shit heel during his EVOLVE run. As such his performance as a desperate man in this match was superb. Every time Galloway rose from the dead Roddy’s face sold his character’s extreme cowardice. Galloway was the embodiment of valor in this war. He never quit and never backed down. Strong had to knock him out to win the match. Great, great performance from the EVOLVE World Champion. My concern from this match is the ending. Strong repeatedly kicking a bloodied Galloway in the head and into the fence is just a stupid stunt and could have seriously injured Galloway. Good main event with a too much violence for me. *** ½

Post-match: PJ Black challenged Galloway to a title match during WrestleMania 31 weekend. Galloway gave him his match, and then cut a very passionate promo challenging Johnny Gargano to a unification match.

EVOLVE continued an impressive string of good shows in its thirty-eighth outing. Every show the promotion has run in 2015 rarely features a stand out match but does showcase an excellent collective effort. Hero/Gulak, Richards/Neese and Fox/Cage continued that trend and all rate *** ½ stars or higher. Each of the aforementioned is an easy watch and all three showcase different styles of wrestling. If the promotion keeps going in a positive direction the revival of the promotion could be one of the major comeback stories of the year.

Is Kota Ibushi One of Japan’s Top Draws? 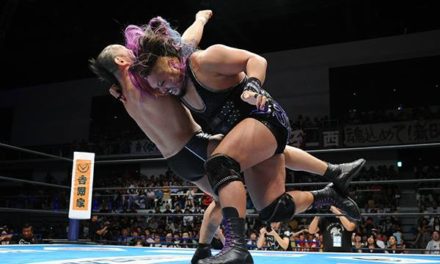 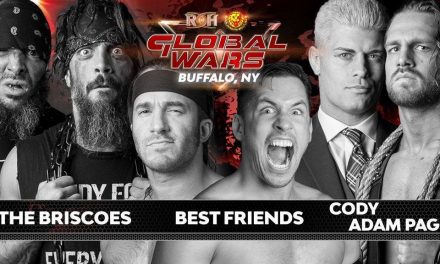