Show couldn’t have opened any better, with a Beatdown Clan (BDC) promo. Yay! MVP is upset that Drew Galloway cost him the World title match last week. Apparently he doesn’t have a problem with Gunner and Roode who also interfered. Drew did a play off of CM Punk’s voice of the voiceless promo. Live he was standing on a chair which he fell off as he did this promo and they edited that out. It’s a bit rich of TNA to have a character who wants to stand up for pro wrestling. The delivery was strong but the content seems clichéd especially considering we’ve heard all this stuff before from TNA and nothing ever changes. The BDC disgust Drew. Kenny King wants a match with Galloway and Galloway accepts.

Kenny King vs. Drew Galloway: King hit a nice trap leg suplex for a near fall. Galloway hit a big top rope clothesline for two. Galloway went for the Future Shock but King escaped and caught a kick followed by a springboard Blockbuster. King went for a backslide but Galloway floated nicely into the Future Shock for the win. *1/2

Roode is out next and he’s upset at EY for attacking him a few weeks ago. They’ve kind of let that piledriver attack fade into the background. Roode says he will become number one contender tonight and that draws out Kurt Angle. Young jumped Roode but Kurt pulled him off and they started brawling aswell. Angle and Roode got the better of Young. Three way will be later tonight, this whole segment was largely superfluous.

Bram vs. Matt Hardy: James Storm attempted to recruit Bram before the match. Hardy hit a clothesline followed by a bulldog and knocked Bram to the floor. Bram took over on the floor. They exchanged slaps and forearms but Bram got the better of it with a spinning wheel kick. Hardy made a comeback punctuated by an elbow drop and a side effect for two. Hardy hit a moonsault but Bram kicked out again. Bram hit a low blow followed by the Brighter Side of Suffering (which is what he calls his implant DDT) for the win. **1/4

Bram looked to hit Hardy with a wrench but Magnus’ music hit and he made the save. Magnus grabbed a mic and cut a promo about wanting to stand up for his child and family. He vowed to give Bram the beating his dad should have given him a long time ago. This was a strong promo from Magnus.

There was a time three years ago where Magnus looked like he was going places. He cut a great promo in England in 2012 that looked like it might be his breakout moment. But eighteen months ago it fell apart when he became every cowardly heel champion ever and played second fiddle to Dixie Carter. He was worse off after he won the World title than he was before it (much like Chris Sabin was earlier that year). Hopefully they can begin rehabbing him because he still very young (only 28) and still has loads of potential.

Spud came out to a strong response. Spud says his rivalry with EC3 needs to end and he calls out EC3. Spud wants to fight EC3 one on one. EC3 began to go into his big spiel about how great he is and how terrible Spud is but Spud told him to shut his mouth. Spud knows all those things about EC3 because Spud was alongside him all the way. Spud wants to be the one who ends EC3’s streak. EC3 agrees, only if Spud agrees to put her hair on the line if he loses. Spud agreed and Hair vs. Hair is made for next week. EC3 said in this world the bad guys win. Spud reminded EC3 of the times EC3 called Spud fierce, a lion, a gazelle. Spud is none of those things. He’s a man and he’s going to end EC3’s streak and shave him bald. Both these guys were tremendous here.

This, like most great promos, was a character defining promo. In the sense that this promo clearly defined each man’s character on a level deeper than the typical wrestling promo. Ethan Carter is self centered. Initially a joke with a sense of entitlement that beat nobodies, nothing to take seriously. But nobody taking him seriously helped him develop an edge, which made him dangerous. To him people are merely a means to an end. And that end is the TNA World Heavyweight Championship. He’ll step on anybody to get there, regardless of how loyal they are to him or how high the regard they hold for him is.

Spud meanwhile is the timeless underdog. He was willing to go to the ends of the earth for EC3 but that meant nothing to EC3. Spud was just another person EC3 had to step on to get ahead.  Spud regrets the lows he stooped to for EC3 but it’s understandable why he did. EC3 is charismatic. People are going to gravitate toward him. However the closer they get the clearer his true intentions become. And this promo managed to encapsulate all of that in a simple, straightforward eight minutes with the lovely end goal of setting up next week’s match. A match where we will determine who is the better man. A match where the loser suffers a great embarrassment. A match where there is a clear person to cheer and a clear person to root against. Pro wrestling really isn’t so hard.

TNA Knockouts Championship – Awesome Kong vs. Taryn Terrell©: Taryn took it to Kong to start but had no luck. Kong threw around Terrell early. Taryn went for a top rope clothesline but Kong barely budged. Kong missed a corner charge which gave Taryn an opportunity. Taryn hit a top rope crossbody which finally took Kong off her feet but Kong kicked out strong at one. This angered Kong. Kong blocked two Taryn Cutter attempts. Kong pushed down Hebner and got DQ’d. Extremely horribly lame finish but Kong’s facials and presence are fantastic. Kong looked to Implant Buster Tayrn on the floor but Gail made the save and came to blows with Kong. **

TNA World tag Team Championships – The Wolves (Davey Richards and Eddie Edwards) vs. The Revolution (James Storm and Abyss) ©: Khoya, Sanada and Manik jumped The Wolves before the bell. I hate heel stables. The Wolves took over when the match started though but The Revolution interfered again to take control. Davey finally made the hot tag to Eddie and he ran wild. Edwards hit a backpack stunner for two. Alarm Clock on Storm but The Revolution interfered again. Storm caught Eddie coming off the top with a Codebreaker followed by the Eye of the Storm for a good nearfall.

Matt Hardy came out to even the odds. The Wolves flipped out of a double chokeslam attempt and hit four straight dives taking out all of The Revolution. Sanada blew mist in Manik’s face by accident. Abyss grabbed the cowbell but Hardy hit him with Twist of Fate followed by double double footstomps (which they call Hammer of the Gods) and we have new champions. Way too much interference but The Wolves’ energy helped carry this to something fun. ***

Number One Contendership – Eric Young vs. Kurt Angle vs. Bobby Roode: They did nice video packages throughout the show on all three guys. Angle and Roode dumped Young out to the floor quickly and squared off. Their cage match was one of the better matches in TNA last year. Kurt hit a German followed by a Belly to Belly quickly. Roode hit a Blockbuster but Young broke up the pin. Young threw Angle into the post. EY dominated Roode for a while. We had the obligatory Tower of Doom (so everything is right with the world). Angle ducked an EY clothesline and hit a German. And another. And another. And another. He got to ten. Poor Eric Young.

Roode came in looking for a Roode Bomb. Angle escaped and looked for an Angle Slam but Roode countered into a crossface. Angle countered into an Ankle Lock but Roode rolled back into the crossface. EY broke the hold. Young looked for a piledriver but Roode escaped and hit a spinebuster. Angle hit Roode with an Angle Slam but Roode kicked out. Straps are down as Angle drop toe holded Young and got him in an Ankle Lock. Young reached the ropes. Roode picked Angle up for a Roode Bomb but Angle floated down Roode’s back and into another Ankle Lock.

Roode rolled through and Angle bumped the ref. Young hit Roode with a chair, Angle took out Young and hit an Angle Slam for the win. Lashley came out and went nose to nose with Angle to close the show. ***1/4

The best show on Destination America so far. The last two matches were good, Magnus’ and Galloway’s promos were very good and the EC3/Spud segment was top notch. This was a very fun two hours of wrestling. Spud vs. EC3 Hair vs. Hair and Young vs. Roode Last Man Standing are next week, Angle vs. Lashley is in two weeks time. 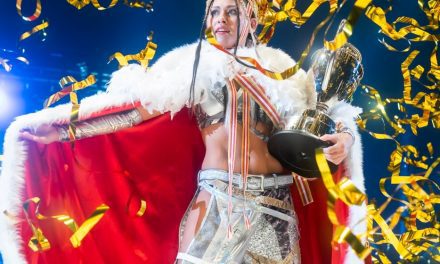 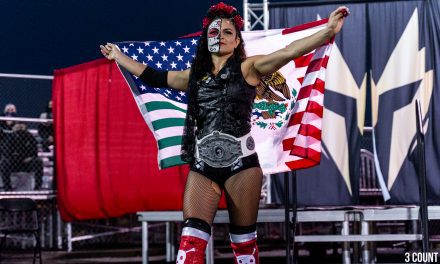