My first review for Michinoku Pro in 2015! Events for Michinoku Pro don’t appear very often, so I try to hop all over it when they do. This doesn’t looks like a big event as there are no title matches, but Ultimo Dragon is wrestling so that is at least one thing I have to look forward to.

This was just basic.  Eagles Mask is goofy but the others are perfectly qualified to be wrestling in the opening match on a Michinoku Pro event.  Nothing exciting but nothing technically wrong with it.  *1/2

Yapperman #3 is Misaki Ohata, and a decent wrestler.  This was pretty solid but a little short.  But they packed a lot into the seven minutes and weren’t holding back anything, even though neither are top tier wrestlers.  Nothing to complain about, it was as good as it could be with the wrestlers and time given.  **1/2

Great Sasuke, Shu, and Kei Brahman vs. Ultimo Dragon, Daichi Sasaki, and Ayumi Gunji:  True story – I am one of three people in the United States that can tell Shu and Kai apart.  Sasuke and Ultimo Dragon begin things and Sasuke starts acting goofy because that is what he does now.  I mean it is literally several minutes before any actual action starts. Kei and Sasaki are tagged in and Kei spits water on Sasaki’s face.  This makes a brawl break out and they battle around the ring into the stands.  Sasuke and Sasaki return to the ring but Sasuke kicks Sasaki out of the apron and onto the floor.  Shu and Sasaki return to the ring as Kei does as well, and they do the luggage/bowling ball trick.  Cover by Shu, but it gets a two count.  Shu grabs Sasaki but Sasaki hits an exploder.  Sasaki tags in Ultimo Dragon and he elbows Shu to the mat.  Kei comes in but Ultimo Dragon kicks him away and hits a side headlock/headscissors takedown.  Sasuke comes in and holds Ultimo Dragon, but Ultimo Dragon ducks and Sasuke is hit with a yield sign.  Sasaki and Gunji come in and they double team Sasuke in the corner for two.  Shu comes in but he eats a superkick from Sasaki.  Sasaki puts Kei on his shoulders but Shu throws powder in his face.  Shu goes up top with Gunji but Gunji elbows him off and he hits a double missile dropkick.  Gunji hits a face crusher on Kei but it gets a two count.  Gunji goes for an exploder but Kei reverses it into a cross armbreaker, and Gunji quickly taps out.

Uhhh no.  Nothing about this was good, and a total waste of one of my favorite wrestlers.  In 15 minutes there was probably 1 minute of actual action as the rest was Sasuke acting silly or brawling outside the ring that you couldn’t see with the one hard camera.  Just completely a waste of time.  1/2*

Manjimaru vs. Rui Hyugaji: They go to the mat to start, and back up they trade wristlocks.  Manjimaru goes for the cross armbreaker and gets it locked on but Hyugaji quickly gets out of it.  Back to the mat they go and I am not very ‘into’ this match as I begin to regret watching this event.  They try to knock each other over, a battle that Hyugaji wins.  Scoop slam by Hyugaji and he hits an elbow drop.  They trade elbows, and Hyugaji goes crashing to the mat.  Manjimaru elbows Hyugaji in the back of the head and hits a backbreaker.  Manjimaru applies a single leg crab hold but Hyugaji gets to the ropes.  Lariats by Hyugaji and Hyugaji elbows Manjimaru out of the ring.  Hyugaji goes off the ropes and delivers a tope con hilo out onto Manjimaru, and he was smart enough to do it towards the only camera.  Back in the ring Hyugaji hits a diving shoulderblock off the top turnbuckle, he goes for a spear but Manjimaru catches him and hits a piledriver.  Back up they trade elbows again, boot by Hyugaji but Manjimaru boots him back.  Lariat by Hyugaji and Hyugaji hits the spear.  Hyugaji goes up top and hits a diving elbow drop for a two count.  Hyugaji picks up Manjimaru but Manjimaru drops him with a brainbuster for a two count.  Lariat by Manjimaru, but Hyugaji barely gets a shoulder up.  Another brainbuster by Manjimaru, but again it gets two.  Manjimaru drags up Hyugaji, nails the Manji-Otoshi for the three count.

This took awhile to get going, but it got quite good once it did.  Lots of hard hits by the end, surprisingly, and Manjimaru delivers a mean brainbuster.  If this was a ten minute match with the first five cut out, this would have been an easy recommendation, but even with the slow start it was definitely solid.  ***

I am not sure if the fact they were ninja turtles made this match better or worse (likely better), but I enjoyed it.  It was fast paced, lots of flying around, no dead time.  This is what I want from indy promotions that don’t have top-level wrestlers, just entertain me, I’m easy.  A really fun main event, no substance or meaning but enjoyable to watch.  ***1/2

The Kameshi trio with a triple tope con hilo!

Diving Body Presses from the Turtles

The last 25 minutes of this card is all I want from smaller indies. I don’t expect five star classics or overly skilled encounters, just try to be entertaining. Half of the Manjimaru/Hyugaji match was fun and all of the main was good stuff, unfortunately everything that came before that was more hit and miss. Even though the main was wholesome mindless entertainment I can’t recommend the event due to the fact there were only five matches with two being good, but at least it wasn’t a complete waste of time to watch. Grade: D

Don’t forget to check out PuroresuCentral.com for puroresu profiles, contests, and other puroresu content! 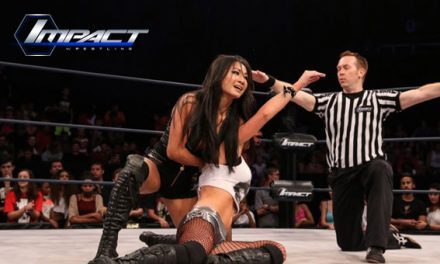