Gabe Sapolsky of WWNLive, EVOLVE Wrestling, and DGUSA joins Rob McCarron of Shake Them Ropes & Voices of Wrestling to talk all the big events coming up surrounding WrestleMania 31. Gabe tells us all the information we need to know heading into EVOLVE, including the reunification of Generation Next of Roderick Strong and Austin Aries.

Among the topics discussed:
– Justin Gabriel & Drew Galloway making a mark in EVOLVE
– The rise of Ricochet
– WWNLive touring China
– What got Matt Cage into EVOLVE
– The evolution of EVOLVE
– Gabe running the ROH Message Board
– What regrets Gabe has from early ROH days
– Roderick Strong’s 2014 & 2015 resurgence

The audio podcast is available below, as is the YouTube version! Be sure to subscribe to Shake Them Ropes and Voices of Wrestling podcasts during March and April as we’ll be discussing the build up to WrestleMania 31 and all the events surrounding it!

Voices of Wrestling on iTunes~! 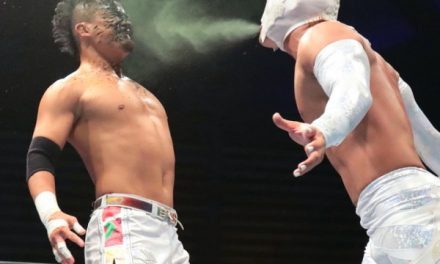