Joe Lanza: The series now stands at 8-7-23, in favor of Komatsu. I never get tired of watching these guys face each other, and they’ve started to get more and more creative in their match structures lately. This may even get more than the usual six or seven minutes with the relatively scaled down six match card. Komatsu has always held a slight edge in the series, so I’ll pick him here as Tanaka continues to struggle to tie things up.

Rich Kraetsch: It’s hard to preview these tilts anymore because we’ve seen it so many times. That’s not putting it down though, these two have improved leaps and bounds over the last two years and each of their matches has a unique feel to it — a clear testament to their advanced skill. With that said, I’m sick of waiting and wondering what the next step is for these guys, let’s start progressing one way or another. Are they staying, are they going on excursion, light heavyweight, heavyweight, I want answers, dammit!

Jason Felix: As always, this should be a fun match between these two. The crowd will get into it. They will both go for variations of Crab Holds. Since Tanaka won the last match at The New Beginning, I expect Komatsu will win this one. Wait…how about  a time limit draw?   (Checks the time limit.)  20 minute time limit…yeah, I’ll go with Komatsu.

Rob Barry: I know these two will always have fun matches that the fans enjoy watching. I just want them to eventually do the No Limit route and just push these kids to the top of the card. I’ll stick with Komatsu but Tanaka needs the win so this series can be 33-33-33, why? I like that number.

Joe Lanza: I will never not be excited for the increasingly rare World Class Tag Team appearances. The last time WCTT competed in a straight tag match was 5/22/14, losing to TAKA & Taichi on a TAKA & Taichi Produce show. A week earlier they lost to BJ Whitmer & Roderick Strong in NYC at War of the Worlds. Their last proper NJPW match was 4/2/14 loss to Jushin Liger & Tiger Mask, and their last NJPW win was way back on 12/1/13 when they defeated Komatsu & Tanaka. They’ll drop their ninth straight match here, but it’ll be lots of fun. Gedo might be the most underrated worker on the entire roster.

Rich Kraetsch: What if I told you this exact match has happened three times prior? Don’t believe me? Well, you should. April 16, 2011, May 1, 2011 and oddly enough almost a year to the date: March 6, 2014. You’ll be shocked to know KUSHIDA & Nakanishi won the three prior matches. You’ll also be shocked to know I’m picking them to win again here.

Jason Felix: If anyone will rate this match higher than me, I’d be surprised. Gedo & Jado haven’t won a tag team match together since 1942 or so. Nakanishi won’t sell for either of them, so I’ll get my share of laughs from the bout. It will be a wacky, squash match.

Rob Barry: I can’t get excited about this but who knows it could be fun and that’s really all you can expect from these matches with the four gentlemen in it. Now give me that singles push for KUSHIDA NJPW!

Joe Lanza: Tag partners collide. I’m into these two sets of friends feuding over the NWA singles titles. It’s a fun change of pace, and despite the fact that historically Kojima & Tenzan do not have good matches vs one another, and even though Tiger Mask isn’t very good, i’m looking forward to each respective title match. Tough match to call, but you would have to think one of the challengers scores the fall. I’ll say Tiger Mask pins Liger.

Rich Kraetsch: We spend a lot of time on the Voices of Wrestling airwaves talking about stagnant New Japan booking and then they hit us with this oddly intriguing craziness. Two sets of tag partners feuding over their respective NWA singles titles, that’s pretty cool! It adds a nice coat of paint to all four guys, especially Tenzan and Kojima who have been wasting away the past few years. I can’t imagine the champs winning here, one of the challenges needs to get the win but which one? Let’s go with Tiger Mask getting the big win here.

Jason Felix: This just feels like a Battle Bowl matchup. Who will win and advance to the Battle Bowl Battle Royal to become the Lord of the Ring?  This should be a fun, little match with each guy hitting their trademark moves on their best friend and eventually….um….it’s actually a tricky match to call because of the upcoming title matches for the respective NWA belts. Liger doesn’t normally take tag match falls, but Tiger Mask taking a fall when he’s challenging next doesn’t work either. No chance either of the Heavyweights take the fall, so I guess Kojima will pin Liger with the lariat.

Rob Barry: I don’t see the NWA champions taking the fall, which I never thought I would type in 2015. Again Kojima is squandering away in these meaningless matches when he should be challenging for the NEVER or even IWGP IC Title but those are my pipe dreams. Let’s stick with the non-champions in a solid bout that people will forget about immediately.

Rich Kraetsch: We’ve found out in recent months that fiery babyface Shibata is the best Shibata. For the purposes of this night,  he’ll likely be back to badass Shibata. Instead, the role of fiery babyface will be played by Nagata who will get a hot tag after the Cap is done getting destroyed. In the end, Nagata will be stifled by Goto & Shibata who will undoubtedly win. I’m looking forward to this a lot.

Joe Lanza: This is a good “get your heat back” spot for Goto & Shibata. These are the kinds of matches that made you wish betting sites took New Japan action. Even at astronomical odds, it’s free money.

Rob Barry: There is no way Meiyu Tag don’t win this. Totally with Lanza as betting sites should get in on this hot action, everyone is a winner. CNJ will be his usual goof and Nagata and Meiyu Tag will be exceedingly stiff with each other. Who knows? Nagata may be taking a comeback run at the IC Title, because who doesn’t love a feel good story?

Joe Lanza: Weird matchup, as you would think they would want to keep Okada’s momentum going heading into the Fale match at New Japan Cup. I suppose Okada beating Taguchi isn’t out of the question, but you have to think YOSHI-HASHI is taking the fall.

Rich Kraetsch: I love the tag team of Naito and Ibushi, they are gre…oh, it’s Taguchi… Let’s hope there’s more Okada and Naito in this and less Taguchi/YOSHI-HASHI (two of my least favorite workers on the active NJPW roster). Okada has been on a huge win streak of late and while it should stay alive, looking at the four guys it’s obvious who’s taking the fall. Look for Okada’s team to lose with YOSHI-HASHI taking the fall.

Jason Felix: Unbelievably, for once, YOSHI-HASHI won’t be the worst wrestler in a match. Why is Taguchi even in this match? Didn’t he get spike Tombstoned on a chair two weeks ago? I hate him so much…Anyways, I expect Okada to take the night off, so we’ll get the YOSHI-HASHI special. He’ll hit some moves at the end and then be pinned.

Rob Barry: While I don’t hate Taguchi as much as Jason we could have had Ibushi here as Golden Stardust Lovers should become a full time tag team. YOSHI-HASHI is taking the fall here as he always does. Who is going to get a big singles win first? YOSHI-HASHI or Tomoaki Honma? Those would be some interesting bets. Some fun Naito and Okada interplay and then HASHI will get pinned in his usual manner.

Joe Lanza: Honma eats a Boma Ye, but the real intrigue is how hard they’ll work. Thanks to the skeleton crew, this isn’t one of those trios matches where there are three pairs of active rivals, so I’m very interested in how it’ll be structured and worked. Could be a real sleeper match if they decide to put on the working shoes. Or Tanahashi, Makabe and Nak take their usual night off and Ishii & Honma do all of the work. Actually, that wouldn’t be so bad either.

Rich Kraetsch: My prediction is chaos. No, not the CHAOS stable but literal chaos with all of these guys. When Tanahashi is the 2nd to least charismatic wrestler in a match you know you’ve got a powder keg. Seriously, what kind of madness are we going to see here? I’m looking forward to some Tanahashi/Ishii interaction, Nakamura/Honma and Toru Yano and Makabe fighting in the crowd or something. I wonder who’s going to take the fall…

Jason Felix: I am really looking forward to this match. If these guys decide to treat this like a big event type match, it could be really great match. Sadly, as this is the main event of a show that will likely feature a visible basketball hoop and a single camera with no announcing, they will probably treat it as less. As such, Tomoaki “Freaking” Honma will get a chance to try to steal the show, since Tanahashi, Nakamura, Makabe, and Ishii have tended to take tag team matches off as of late and Yano appears to have thrown his feet into a lawnmower over the last Saturday. If these guys work close to full speed, I’m really excited. It doesn’t really matter who wins, so I’ll just expect Honma to take the fall.

Rob Barry: I don’t know what to expect from this match and that’s what makes it so intriguing. Will everyone take the night off and Yano become the best worker in NJPW for one and one night only? Yeah I doubt that. Kokeshi’s will happen or not, Boma-Ye’s will happen and Ishii will be a beast. Makabe may want to prove something and Tanahashi will take it easy but this match could surprise and be a sleeper that steals the show which is really all you want for your main event on a New Japan Road show. Road To The Cup! 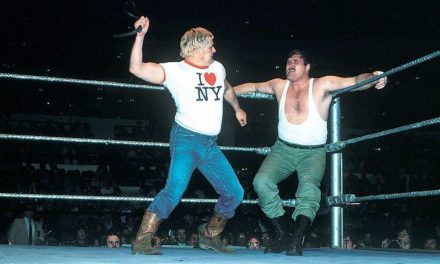