No bullshit tonight, we kick it off quick with the opener Hideo Itami taking on the floundering Bull Dempsey. Tonight is the “The Brian Kendrick” supershow. Seriously, I received a Push Notifcation from WWE Network informing me a special guest was arriving and all the pre-show publicity was centered around him:

I’m cool with it because I’ve always been a huge fan of Kendrick but it seems totally out of place for a company who had the guy in his prime and had him win only 44% of the time. Either way, let’s kick it off.

Hideo Itami vs. Bull Dempsey: Remember when I described Dempsey as floundering? Well, here we go again. Bull had a bit of offense at the beginning but the last half of the match was all Itami who once again looked crisp here. I’m still not in love with the “Flying Dropkick” finisher but the strikes and Itami’s confidence are finally coming into form. Bull should probably start updating his resume. *1/2

Itami was celebrating for far too long on the ramp and you know what that means — he was attacked, this time by Tyler Breeze who decimated Itami with the fuzzy selfie stick. Itami popped up real quick and attacked Breeze from behind. They find their way into the ring where Itami kicks Breeze with a series of kicks before he runs away through the crowd.

Back from commercial, we get a THE BRIAN KENDRICK promo. Holy shit if WWE pushed their normal guys half as well as NXT is pushing The Brian Kendrick, we’d have more than 1.5 babyface stars. The promo was really good and only clarified that they had a solid character for years and did nothing with it.

Lucha Dragons vs. Tye Dillinger/Jason Jordan: Solomore Crowe hacked Dillinger/Jordan’s intro and said his mission won’t be complete until he’s NXT champion. Back to the ring, Jordan/Dillinger are described as blue chippers by you know who (yes, Alex Riley is back after his oh so brief and welcomed departer from the NXT commentary team). Dillinger and Jordan had some issues as Jordan continued to call for a tag which was ignored by Dillinger. Tye eventually reaches towards Jordan for the tag but he drops down from the apron and walks to the back. Senton Bomb from Sin Cara and it’s over. Lucha Dragons didn’t look great here but this was a perfectly acceptable WWE tag match. *3/4

Back from commercial, Tye Dillinger is still in the ring. He calls out Jason Jordan but is met by the revving engine theme music of Baron Corbin.

The far superior NXT backstage interviewer Devin Taylor is with Charlotte asking about the Women’s Championship rematch next week. Charlotte cuts a really dry, mediocre promo about the title coming back home.

Bayley vs. Becky Lynch: An attempted “Becky Lynch!” chant was quickly boo’d and squashed by the NXT fans, that was pretty cool. Eventually a dual chant did break out as Lynch showed some great fire at the beginning of the match. Bayley eventually works her way out of a headlock and sends Becky to the outside. Bayley hits a dropkick through the corner not unlike Sami Zayn’s corner DDT. Now it’s Bayley’s turn to show fire as he hits a series of strikes on Lynch and hits her corner elbow strikes. Bayley tries for a Bayley to Belly but Becky turns it into a gorgeous arm bar which makes Bayley tap almost immediately. Fun little match here, these ladies are really a talented bunch. **1/2

Devin Taylor with Rhyno who says everywhere he goes he hears about NXT and how great all the competitors are. Rhyno says he felt the fire he’s always had and wanted to make a statement at NXT. He said he’s going to make it to the top. More Rhyno in our future!

We get a “Before the Break” promo backstage with Jason Jordan who says he’ll give an explanation for why he abandoned his partner when he’s ready.

Kevin Owens and his newly muscular arms at the commentary booth. THE BRIAN KENDRICK makes his way down the ring and they cut to fans in the crowd taking photos. Seriously? I love Kendrick but I don’t know if I need to have a picture of it. Unless it was just Rob McCarron trying to get “scoopz” then it’s cool.

The Brian Kendrick vs. Finn Balor: Kendrick fakes an ankle injury but ends up showing himself as a crafty veteran by rolling Balor up to try and get a quick win. The crowd is deadly silent throughout the match as Owens/commentary Alex Riley exchange words uncomfortably (kayfabe uncomfortable — they are going to fight!) Owens says he’s going to leave before he does something he’s going to regret as Riley insinuates that Owens was wrong for showing no remorse for his buddy Sami Zayn. I’m not doing this justice in text, this was really good and awkward enough to make it feel much more real and organic. This was great and I’m looking forward to this inevitable match. Side headlock from Kendrick as we go into break, he’s ready to be a trainer!

Back from commercial, Balor has transitioned into the offensive working Kendrick with a running chop and a quick cover. Balor starting to feed off the crowd. Kendrick hits a great Tornado DDT but only gets two. Kendrick starts firing up but he’s met by a huge running clothesline by Finn as the crowd finally starts getting into the match. Slingblade from Balor followed by a running dropkick, double leg stomp and the 1-2-3. **1/2

Post-match, Owens comes out and stars Balor down before making his way toward the annoucers table. Owens then grabs Riley and tosses him over the table as we go off the air.

This wasn’t a great episode of NXT but it was perfectly fine. There was nothing bad but nothing that stood out — Bayley vs. Becky Lynch was solid and the definite match of the night while Balor vs. Kendrick never really got going. This wasn’t a bad episode by any means but was as close to a mediocre show as NXT has had in months. With that said, it will still be far and away the best weekly TV show WWE has this week. 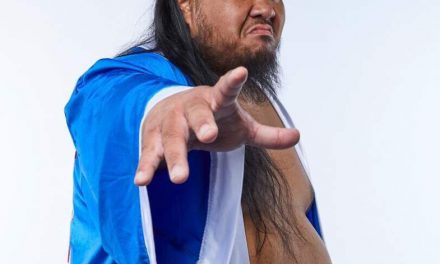