One of the more disappointing aspects of WWE television in the last half of 2014 and now into 2015 is the devaluing of the Dean Ambrose character. While he hasn’t been buried by any stretch, he’s certainly in a much worse position than he was immediately following the break-up of The Shield or after his break-out in the fall of 2014. Why did it happen? Why was Dean Ambrose so devalued? Was he not ready for the spotlight, did he not perform up to standards? What happened?

My theory some month back seems to have played out exactly how I predicted: his push was and always will be tied directly to Roman Reigns’ presence.

Now that may seem super simplistic and given WWE’s current approach to babyfaces, it kind of is. There aren’t two babyfaces with upward momentum at the same time anymore, it just doesn’t happen. Whether that’s deliberate or a by-product of putting all your creative eggs in one basket, I don’t know. What we see from Dean Ambrose’s trajectory over the last year is a clear relationship to the push of Roman Reigns. Ambrose’s momentum exploded when Reigns was out of the picture (hernia surgery) and once Reigns returned, Ambrose was placed in his old spot again. What’s interesting though, is how Ambrose/Reigns’ push-relationship coincides with the Royal Rumble — again a theory I had which we’ll get to in a bit. Let’s try to make sense of this by breaking Ambrose’s timeline into four parts:

For the purposes of this article, we’re simply going to look at Ambrose’s singles contributors, win-loss record, time of match, etc. This period is famous for Ambrose’s lengthy but inconspicuous United States title run. In April, Ambrose surprassed MVP for the longest US Title reign in WWE history but during which he only had five successful defenses. In-between he lost a bevy of matches via DQ, countout or non-title. Basically, during this period Ambrose was the epitome of the current even-steven WWE booking — his record was 9-9 with an average match time of 11:55. This period did include his initial post-Shield breakup run with Seth Rollins.

Here’s where we see a major change in Ambrose’s fortunes. After being “injured” by Kane and Seth Rollins in a Falls Count Anywhere match the day after SummerSlam, Ambrose took time off to film Lockdown. This time off was a blessing in disguise as Ambrose came back hot with the fans salivating for him to add some much-needed juice to the top of the card. Ambrose returned at Night of Champions, attacking Rollins and re-igniting their feud. Night of Champions is also notable because it wa announced just days prior that Roman Reigns would miss significant time with hernia surgery. Was it the perfect storm (WWE needed an interim babyface) or was it planned all along? Suddenly, Ambrose became one of the hottest acts in the company going 9-2 in PPV/TV singles matches during this period. His average match time fell to 9:04, but who cares? He was winning and he was winning big. This culminated in a huge win over John Cena on RAW:

That win led to a Hell in a Cell match against Seth Rollins, which, if you know anything about Ambrose’s history on WWE PPV, he lost. It’s cool though, Ambrose was here to stay, another top babyface in the picture, right?

With Roman Reigns’s inevitable return pegged for the Tables, Ladders, Chairs and Stairs PPV, Ambrose’s push evaporated. In this time period, “Build to Royal Rumble“, Ambrose went 3-4 though he had an average match time of 16:07 thanks to a major feud with Bray Wyatt. He had stuff to do but it was squarely a step below the main stage. Ambrose was being put into a weird position (a feud with momentum-killer Bray Wyatt) doing magic and just being everything that the Dean Ambrose with momentum wasn’t. Any humanizing aspect of the summer/fall Ambrose was lost with this version. My theory was this being a very deliberate attempt to prevent a Daniel Bryan situation in the 2015 Royal Rumble, with Ambrose playing the DB role. Ambrose was hot, Reigns was coming back and was about to step back into the spotlight — the parallels were there. WWE (still my theory) sensing this, shuttled Ambrose into a goofy feud with Wyatt where he was far less over and lost a bunch during that month, with the intention of him meaning nothing when the Rumble came around. Kudos to them because Ambrose meant nothing in this year’s Royal Rumble but I’m taking those kudos away because they brought Bryan back for the Rumble. This led to Bryan himself playing the Daniel Bryan role as the crowd turned on the match the moment he was eliminated.

With the Royal Rumble now out of the way, Ambrose began winning again — he’s now 3-1 in the new year but this requires some qualifiers. He’s doing all of this while feuding for the Intercontinental Title with Bad News Barrett. That’s numerous steps below where he was in the fall, even if he’s still winning. With that said, it’s still worth charting his wins and losses throughout the year relative to Roman Reigns’ presence.

This entire thing can be as simple as this: WWE needed a babyface while Reigns was out and Ambrose was the best choice. Once Reigns returned, they had no need for Ambrose and he went back into his hole. I don’t know. I’m of the mindset that two babyfaces can get over at the same time and intentionally letting air out of someone’s balloon is silly business.

The most telling part of the Reigns/Amborse relationship is not that Ambrose suddenly got a push when Reigns was out of the picture — he was one of their most pushed guys. 9-1 is not a TV/PPV record to slouch at, that’s palpable momentum that gets guys over — and it did. The follow up though, is what we have now: Ambrose as the zany, wacky dude doing fake Brian Williams skits, playing magician with Bray Wyatt and hoping to get his picture on a wall of recent WWE IC Champions.

Was Ambrose’s cooling off a deliberate attempt to kill momentum? Did WWE simply never believe in him, but needed a babyface in the interim? Or was this WWE’s inability to book two babyfaces with momentum at the same time? 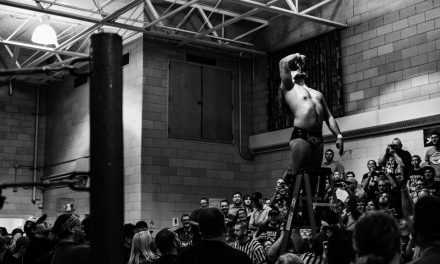