The Bella Twins get in one another’s faces, Natalya and Tyson Kidd continue to have the most awkward of relationships, and Eva Marie is on vacation. No, it’s not the Divas title match from WWE Fastlane —  it’s “Total Divas,” and this week it’s all about shopping and teary family vacations. Oh, and whether “hoping Vince will get on board with the idea of a pregnant Diva” is a valid retirement plan.

Eva Marie and Jonathan are going on vacation with Eva’s family. She’s suspicious about her dad’s motives for planning the trip, during which the family is staying in the two-story Sky Villa at the Palms, an off-Strip property that has things like balconies and in-suite swimming pools. (My husband played in the WSOP a few years ago and his sponsor put him up in a suite at Palms Place that had a soaking tub in the bedroom. That suite was a hovel compared to the two-story setup Eva’s dad has picked out for what she suspects is a bucket list trip. A hovel.)

Her mom’s explanation that the trip was planned around the extended downtime stemming from Eva’s boob job do-over doesn’t hold water with Eva (or saline, as the case may be).

“Why are you making it sound all somber like Dad’s gonna die tomorrow?” one of her brothers asks Eva. Ultimately, though, her brothers agree they should give their dad a trip to remember, with race car driving, eight-pound burger challenges and machine gun rentals. It really takes a lot of arm twisting.

Eva whips the family through a gantlet of compulsory fun, capped off with tandem skydiving, at which point her dad refuses to get on the plane. Turns out he’s not that big into flying. Then Papa Marie finds out about the bucket list Eva has put together for him, and he’s understandably irked that everyone thinks he’s dying and has been carrying on as though it’s his last vacation. He has one of his trademarked blowups, there are tears, and then the kids all regroup back at the Palms.

“The things that you planned are friggin’ off the chain,” one of her brothers explains. “They’re just not off Dad’s chain.”

So Eva apologizes to her dad using the icky little-girl voice she uses every time she has to apologize to her dad, and they all make up by taking him to drive race cars. Whee!

Because last week’s episode with Natalya’s dad wasn’t depressing enough, this week’s Nattie arc kicks off with a testy conversation with her estranged husband, Tyson “TJ” Kidd, and then takes us to Nattie’s mom’s house, where we learn that Nattie’s beloved mother is living in a flooded-out wreck of a home.

Nattie reaches out to TJ to help deal with the aftermath of the flood, and naturally he’s kind of a tool about it at first, because that is his role in this relationship, and then he is a totally helpful good guy about it, because that is his other role, and he arranges a contractor and spends a lot of money fixing up Nattie’s mom’s house.

“That was nice of him,” Nattie says to Trinity/Naomi, who’s in the car with her when TJ calls with an update from the contractor.

“That wasn’t nice. That was love, Nattie,” Trinity says.

Nattie and Trin go furniture shopping, and Nattie opens up about how she’s afraid everything she’s been through with her dad will repeat itself with TJ.

“You can’t keep punishing him for things he hasn’t done,” Trinity points out. (Trinity is basically the Yoda of “Total Divas” in that she’s insanely commonsensical in addition to being a better wrestler than most of them, so it’s really great that WWE is mostly using her to valet the Usos these days, because it’s totally not a complete waste of talent.)

When it comes time for the emotional reveal of the house to Nattie’s mom, everyone tears up and then Nattie gives all the credit to TJ because, as she says in a talking head, she’s learned something:

“This relationship, just like this house, is worth salvaging.”

“Nikki lives with John, and she feels that she deserves everything,” Brie explains. She then lists Nikki’s expenses, all of which are covered by John Cena with the exception of her cell phone bill, which Nikki proudly insists she does pay herself.

“You need to be saving your money just in case John puts you on the streets,” Brie says.

For her part, Nikki points out that Brie loves to spend money on things like her house and garden, which she doesn’t think is any less superficial than her swollen collection of designer goods.

“Brie loves to lecture me all the time about my shopping, but come on,” Nikki says. “If there was some vegetable that collaborated with another vegetable to make a once-in-a-lifetime vegetable, Brie would be all over it.”

Later, after Nikki opens up a shipment of designer dresses (that she bought on clearance!) at Brie’s house, Brie starts lecturing her about fiscal responsibility.

“Boner crusher, it is called,” Brie corrects her.

Brie goes out for mani-pedis with Mama Bella (the secret star of “Total Divas”) and tells her all about Nikki’s new object of lust.

“I know you think your sister is a nut, but you guys spend money differently,” Mama Bella says. Then she admits she herself thinks Brie and Bryan were nuts to spend $7,000 on a gray water system.

Back at the Cena manse, John has ordered Nikki — guess what? — the bag she wanted. And yeah, it’s exactly the one we thought it was. Despite the editing out of the brand names. Nikki shows up at work dressed in head-to-toe high-end labels (Burberry check wrap, Louis Vuitton monogram roller bag, the Louboutin/Vuitton bag, Louboutin Alti pumps covered in gold spikes) and prances around in front of Brie. (If you’re lost, wrestling guys, just know this: These are aggressively recognizable status brands.) After losing her cool over Nikki’s financial irresponsibility, Brie drags Nikki to a financial advisor who specializes in professional athletes.

Guess what? Nikki has thought about the future (she’s a licensed real estate agent), while Brie’s only post-wrestling plan is to be “a mother” and hope for a storyline that involves a pregnant Diva.

“I keep telling her there’s no way Vince is gonna let a pregnant Diva valet me,” Nikki says.

In the car on the way home, Brie is forced to admit that maybe Nikki isn’t any less responsible than she is. And then Nikki comes up with a plan that makes sense to both of them:

“I should buy stock in wine.”

And if “Total Divas” gets picked up for another season, so should I. Or at least remember to buy more wine. 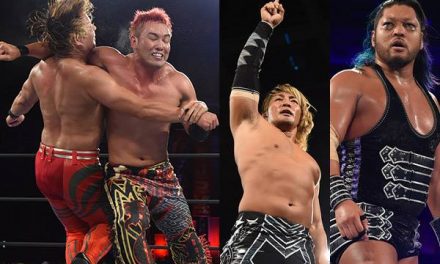