“Who the Hell is Senshi?”

In April 2006, I looked up the results of TNA’s then-most recent pay-per-view, Lockdown. After the first few matches, I came across a name I did not recognize: Senshi. He beat Christopher Daniels in a Steel Cage match at the event. I later learned that Jushin Liger was supposed to be Daniels’ opponent, but Liger backed out because he didn’t want to wrestle in a cage. So the match was changed to Christopher Daniels vs. a mystery opponent, and that opponent was Senshi. Nonetheless, the result surprised me. This mysterious wrestler, whoever he was, beat Christopher Daniels in his debut match. This was no small feat.

It did not take long for me to find out (only a few minutes, actually) that Senshi was none other than Low Ki. Low Ki, who had been part of TNA’s signature X-Division since the company started in 2002, originally left TNA in 2004. After leaving, Low Ki focused his wrestling career primarily in Ring of Honor and Pro Wrestling NOAH. His match against NOAH all-star and GHC Junior Heavyweight Champion KENTA (now known as Hideo Itami in NXT) at ROH’s Final Battle 2005 is regarded as one of the best Ring of Honor matches of all time, as well as one of the best matches of the last decade. It also serves as a fitting end to Low Ki’s prominent ROH and NOAH runs.

Just a few months after nearly kicking KENTA’s head off, Low Ki left ROH and NOAH behind and returned to TNA. He had a new name, new entrance music and, most importantly in regards to this article, a new finisher: The Warrior’s Way.

The Warrior’s Way is a diving double foot stomp. Low Ki climbs the turnbuckle and jumps off the top rope. He lands both feet directly onto his fallen opponent’s chest or stomach.

There are two types of diving double foot stomps:

There are two notable wrestlers who currently use the second type of stomp as finishers, both are also in NXT. The first is Finn Balor (the former Prince Devitt), who calls it the Coup de Grace. Just to give you a lovely image in your head, I’ll remind you that Balor once did his diving double stomp right onto Captain New Japan’s balls.

The second is Hideo Itami. Itami actually only busts this move out when he is teaming with Balor. When Balor came to NXT, Itami was using the double stomp as his finisher because his other finishers were spoken for: CM Punk was the Go 2 Sleep guy in the eyes of the WWE fans (even though Itami invented the move) and Daniel Bryan began using Itami’s Busaiku Knee Kick and Game Over (a.k.a. the Yes Lock) before Itami signed with the company. But then once Balor debuted, he started using the Coup de Grace as his finisher too. And because Finn Balor is Finn “Holy Crap, This Guy is Really Popular” Balor, the diving double stomp got more over with him than Itami. So Hideo Itami is currently searching, yet again, for a new finishing move that hopefully won’t be snatched from his grasp by another wrestler.

The Way of the Warrior

First thing’s first: the jump. When Low Ki jumps off the top rope, he jumps. Being a smaller, lighter guy certainly has its advantages here, since Low Ki is able to get a lot more height off his leap than some of his larger companions. Not only does this look cool, but also the longer distance that Low Ki has to fall to reach his opponent means that he builds up more speed than if he had merely hopped off the top rope. More speed means a greater force of impact when Low Ki’s feet collide with the opponent.

Secondly, the way Low Ki motions his legs during the double stomp causes a substantially greater amount of pain. When he jumps, Low Ki curls his legs so that his knees are very close to his own chest. Mere milliseconds before the move is completed, Low Ki extends his legs. This is an ingenious decision on the part of Low Ki. Instead of the standard Spike Dudley double foot stomp where the legs are extended the entire time, Low Ki practically pushes his legs back into a relatively straight position by using his opponent’s chest or stomach as a base. He is actively driving his feet into his foe as opposed to simply landing on him.

The first area targeted by the Warrior’s Way is the chest. I hope for the sake of Low Ki’s opponent that he doesn’t consider breathing to be a top priority; when Low Ki hits his double stomp, breathing is going to be A LOT harder to do. He lands dead center on his opponent’s chest, so goodbye air supply. And a hearty adios to his opponent’s ribs. Chances are good that one or two of those bad boys are going to crack under the boots of the “World Warrior.” With the opponent gasping for air and reeling from the massive amount of pain engulfing his ribs and chest area, this makes it easy for Low Ki to score the pinfall victory.

The second targeted area is the stomach. Once again, out goes all that precious air from the opponent’s lungs. Of course it’s a little difficult for the opponent to worry about getting air into his body because he’s too busy noticing that his guts feel like they have been turned into mush. Think about how much it hurts to get punched in the stomach. Now multiply that by 20. That is the Warrior’s Way when all of Low Ki lands on your mid-section.

I cannot conclude this analysis of the Warrior’s Way without mentioning the scream. As Low Ki jumps off the top rope, he emits this primal, high-pitched, Banshee-like scream. I love that scream because it gives Low Ki such a badass aura about him. Here is this silent, martial arts-oriented killer who rarely shows a hint of emotion during a match other than his “contemplating next painful move” face.

So when Low Ki actually does make a noise, it is this otherworldly shriek: a death call that announces your demise by way of two falling feet. 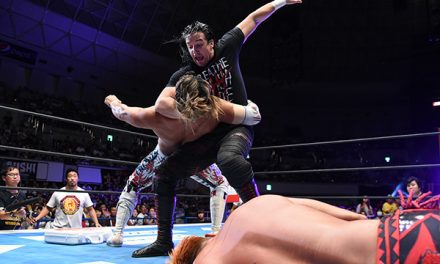 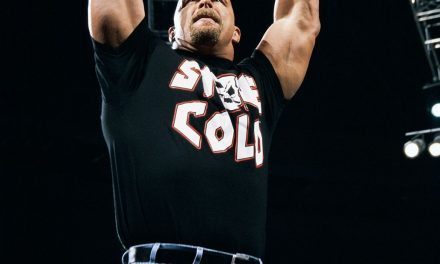