Beyond Wrestling. Familiarize yourself with those words, wrestling fans. The promotion based out of Providence, Rhode Island gained a following the last year and a half thanks to a cozy venue and reputedly excellent grilled cheese truck in the parking lot. The funny things is, the wrestling isn’t half bad either.

Do not expect a blow-away show but each match—with the exception of one—is an easy watch. Use this show to familiarize yourself with a tremendously talented roster who I suspect will make waves on the American independent scene as 2015 progresses.

AR Fox and Shynron opened the show exchanging words. Fox had to forfeit their scheduled match for the Chile Lucha Libra Championship due to injury making Shynron the winner by forfeit.

Dave Cole vs. Davey Vega: I have no idea what got into Davey Vega during this match. Normally, he is very composed and willing to wrestle a conservative style. Not this night though. Against Dave Cole Vega summoned the spirit of Sabu and took reckless risks. Cole controlled majority of the contest and the few chances Vega had to take the offensive required him to put his body on the line. This temporary flare for the dramatic cost Vega.  Poised to put Cole away Davey took his opponent up top and Cole rebounded to hit a Super Underhook Powerbomb for 1-2-3.

Vega’s daredevil antics costing him the match was a nice story that benefitted from being in this solid opening match. ***

Team Create-A-Pro (John Silver & Ryan Galeone) vs. The Gentlemen’s Club (Chuck Taylor & Orange Cassidy): Chuck Taylor was in the house and ready for tag team action along with Orange Cassidy and the always awesome Swamp Monster. Orange Cassidy befuddled his opponents with moves that mirrored the swiftness of quicksand. Smooth Chucky T goofed around and inspired John Silver to combat him on his knees. Say what you will about their unorthodox antics but the eccentric duo’s methods netted them the victory via Taylor’s famed Awful Waffle.

A match designed to put a smile on the viewer’s face. **½

While Silver and Galeone were convalescing in the ring the loud mouth “One Man Thrillride” Jimmy Dalton came to the ring. Dalton lobbied for Galeone to ditch Silver and comes with him so that Galeone could unleash his potential. Gaelone hesitated for a moment but finally walked out on Silver.

Anthony Stone vs. Matt Cross: Suplexes, chops and both competitors spending quality time on the mat sum up this match. The first bit is slow but the action heats up during a hot closing stretch. Anthony Stone picked up the win with a Springboard Flying Knee. Harmless ten minute match. **½

No Disqualification – Matt Tremont vs. Ricky Shane Page: Given Matt Tremont’s reputation as a garbage wrestler I was dreading this match. So, when it started out with a couple of chain wrestling sequences I was surprised and shocked because weapons hardly played into the contest at all. RSP and Tremont were content to slug it, see a nice exchange where both men were seated in chairs and managed to momentarily knock each other out. The same two chairs played into the finish. Page took Tremont up top only to fall prey to a Superplex onto the chairs.

An excellent brawl aided by a lack of weapons. **¾

Da Hoodz (Davey Cash & Kris Pyro) vs. The Hooligans (Devin & Mason Cutter): The Cutters are husky boys who can flat-out move. I don’t mean just agility, they flip around the ring like cruiserweights. Much of the match was The Hooligans exhibiting their high-flying offense but credit to Da Hoodz for keeping up the fast pace when they were in control. My only qualms regarding the match are a time killing segment in which the teams brawled on the venue’s stage and the abrupt finish that saw Da Hoodz win following a Senton from the top rope.

A good and fast paced match that needed more time. ** ¾

Shynron vs. Fire Ant: Ten minutes is plenty of time to have a solid match and Shynron and Fire Ant need to remember that. In one sixth of an hour both men attempted to fit as many brain kicks and crazy flips into their allotted time. The crowd in Providence was “treated” to a clumsy exhibition and when Shynron finally exterminated the ant with a Double Rotation 450 I gasped an audible “Thank God”. DUD

Fox and his foxy friend put the boots to Shynron after the bell and stole his Chile Lucha Libre belt.

Mike Bailey vs. Silver Ant: Where Shynron and Fire Ant failed, Bailey vs. Silver Ant succeeded by keeping their match simple. Mike Bailey lived up to his nickname— “Speed Ball”. Naturally, Silver Ant became frustrated with Bailey’s quickness. To counter, the Colony member grounded his opponent with some of the most gorgeous chain wrestling these eyes have seen. Bailey resorted to his striking game late in the match and in turn Silver Ant drove him into the mat. In the end speed trumped technique, Bailey won the bout with a Shooting Star Double Knees.

Keeping it simple always works. A fantastic clash of styles. ***¾

Team Pazuzu (Jake, Pinkie Sanchez, Mike Dratzik & Angel Ortiz) vs. Franky the Mobster, Buxx Belmar, Thomas Dubois & Mathieu St-Jacuqes: I suggest you turn off your mind to watch this match. It is a non-stop Dragon Gate style multi-man tag with ridiculous combination moves and a fun brawl before the bell rings. Team Pazuzuz pulled off the win in a wild one. ***¼

Kimber Lee vs. David Star: Star is a bold man. Before the match he got on the stick and suggested that his opponent traded fellatio for favors. As soon as her music hit Kimber was all business and started the match by kicking Star right in his mug. She took the fight to him on the outside and beat him good for the opening portion of the match. David recovered enough to use his size advantage and brutalized the much smaller Lee. Then he got cocky and put his meat bag on the lovely Ms. Lee’s face. The sorry bastard never saw the Arm Bar coming and submitted right in the center of the ring.

Lee was great as the tempestuous foil to Star’s fantastic prick character in this enjoyable match. ***½

David Star did not take his loss well and took it out on Kimber after the match. Chris Hero and JT Dunn hit the ring to make the save and clear the trash out of squared circle.

Biff Busick & Drew Gulak vs. JT Dunn & Chris Hero: This was a very good professional wrestling match with a little bit of everything. The match featured gorgeous grappling and stiff striking. By no means is it a classic main event but by the time Busick picks up the win with a Rear Naked Choke I do promise you will feel satisfied with the fight. ***½ 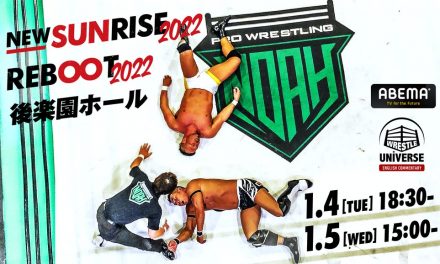