TNA World Tag Team Championships – The Hardys vs. The Revolution©: Always nice to begin a show with some action. Hardys started off strong connecting with Poetry in Motion on both Storm and Abyss. Manik interfered almost immediately. Putting aside my usual hatred of heel stable driven interference, there is the obvious problem of rendering the cage pointless six minutes into a show full of cage matches. Especially when Roode made a point to stress no interference last week when referring to his match vs. Eric Young. The Hardys hit duel Superplexes on Manik and Storm followed by a double suplex on Abyss. They handcuffed Manik to the cage. Taz did raise the point of where the hell they got handcuffs.

The Revolution then took over. Revolution got a near fall off a slingshot DDT. Storm hit an elbow off of Abyss’ shoulders followed by an Abyss splash for two. Jeff finally made a comeback with a Whisper in the Wind. The lighting on these shows is really awful. And this was on their most attended night of the three. Their first show in 2002 looked better than this did. Double Twist of Fate’s by the Hardys for two. Matt hit a Twist of Fate from the top rope. Khoya then pulled Matt out of the cage through the slot TNA cut out of the cage for the cameras. Sanada blew mist in Jeff’s eyes and Storm hit Last Call to retain. As per usual with matches like this, it would’ve been better without all the nonsense. **1/4

After the match Khoya put Matt through a table with a Sky High. Abyss pulled off Manik’s handcuff with an ease that seemed entirely hokey. Also why didn’t he do that earlier? Manik missed a frogsplash through a table and Jeff tried to escape. Abyss then crotched Jeff on the cage door and Storm knocked him off onto the steel steps. Jeff Hardy is a crazy person. He took that bump about as well as he could have. Though it’s still a crazy bump to take.

The Beatdown Clan (BDC) are in the ring. MVP has a proposal for Angle and wants him to come to the ring. MVP essentially wants Team Angle to back out of the match. Team Angle decides to just brawl instead. The BDC slammed Gunner’s arm in the cage door. Not entirely sure what the point of all this was. They wanted to make Gunner all tough and stuff for working through the pain but this show really would’ve been no different without any of this. Also I can’t help but zone out for MVP’s promos lately.

Awesome Kong vs. Havok: They started the match brawling outside the cage. They finally got in the cage and started exchanging blows which Havok got the better of. They exchanged chokeslam attempts but neither could connect. Kong sidestepped a charge and Havok connected with the cage. Kong missed a backfist and got hit with a chokeslam but bounced straight up to hit a chokeslam of her own. Kong went up top but Havok cut her off. Kong dumped Havok off the top and hit a middle rope splash for the win. About what you’d expect from a match between these two. They kept things simple and Kong moves on to bigger things. **

Eric Young vs. Bobby Roode: EY controlled the early stages throwing Roode into the cage a few times. MVP comes out to hand Young a chair. They exchanged Piledriver and Roode Bomb attempts before Roode slingshotted EY into the cage. EY is bleeding. The crowd don’t seem particularly engaged here. Roode connected with a spinebuster for a near fall. Roode looks for a Roode Bomb off the top but EY knocks Roode to the mat and hits an elbow drop for two.

EY looks for another elbow, this time on a chair, but Roode flung the chair at EY. Roode then went to town on EY with the chair. Roode hit a Roode Bomb on the chair for three. This was a little disappointing. The crowd were never with them and there didn’t seem to be much drama there. These two usually have better matches together. **

Mark Andrews and Rockstar Spud vs. Tyrus w/ Ethan Carter III: Tyrus dominated to start. Spud and Andrews came back with double dropkicks. Tyrus took back over and launched Andrews into the top turnbuckle with a trap leg suplex. Spud escaped a Powerbomb and climbed the cage. Spud took off his bowtie and hit a flip dive off the top of the cage. EC3 knocked Andrews onto the steps. This is the third cage match tonight with outside interference. EC3 slammed the cage door on Spud’s head and Tyrus hit his Samoan Spike for the win. I like how they’re establishing Spud as a legit wrestler bit by bit but I really wish they wouldn’t have Tyrus beat him up so often. EC3 looked to shave Spud’s head but Jeremy Borash pulled out the chord. **

They showed clips of Robbie E and Brooke competing in an amazing race…around ringside. The highlight of which appeared to be a hurracanrana by Brooke. It’s probably for the best that they cut this down to a minute long package because it looked like it would’ve been as insufferable as those old NXT challenges when NXT was a game show.

Team Angle (Kurt Angle, Gunner, Austin Aries, and ???) vs. The Beatdown Clan (MVP, Kenny King, Samoa Joe, and Low Ki) – Lethal Lockdown: No roof for the second year in a row. Team Angle started the match without a fourth man. I know they’re telling the Lashley story but why doesn’t Angle just go get one of The Wolves, or Ken Anderson to fill the final spot? Or better yet – Garett Bischoff. He is still on TNA’s roster page and once did lead a team to Lethal Lockdown victory. Fun fact: The babyface team has never, ever lost a Lethal Lockdown match. So Team Angle has that going for them.

Kenny King and Gunner start. I do love the way they play up the man advantage when in fourteen out of fifteen Lethal Lockdown matches the team with the numbers advantage lost. King focuses on Gunner’s arm to start. Gunner choked King with a nightstick. Low Ki was next out. Gunner took it to Low Ki but King hit him with a garbage can lid. Ki and King dominated Gunner. Austin Aries is out next. Aries finally brought a little energy to the match.

Aries and Gunner hit a Doomsday Device on King subbing a top rope clothesline with a top rope trash can shot. Gunner evoked memories of Jim Cornette hitting Low Ki with a tennis racket. Joe is next. Joe ran wild and the BDC took over again. There’s really not much energy in the building at all. Can’t really blame them. Angle is out next. Angle suplexed Joe. And we’re back to generic brawling. Ki hit a Warriors Way on Aries in the corner. MVP is the final BDC wrestler out. MVP took everybody out with a Kendo stick but got hit with a suplex.

BDC take control after the break. Angle hits everybody with a trash can lid which draws a “You Still Got It” chant. BDC beat everybody up some more before Lashley finally hit the ring and offered his hand to MVP. Swerve as he clotheslined MVP and took everybody out. The BDC then beat Lashley down. Lashley really should have just run wild, killed everybody and picked up the win. They did such a better job last year booking him as a monster. In a cool sequence, Gunner got King in the Torture Rack, Angle locked the Angle Lock on Joe and Aries put Low Ki in the Last Chancery. Lashley then hit MVP with a Spear as everybody else was trapped in a submission and Team Angle picked up the win. There were long periods of this match where it wasn’t very interesting but there was enough action there to skate by as decent enough. Not up there with the better Lethal Lockdown matches. **1/2

I’ve kind of given up expecting anything transformative out of TNA but the biggest impression I got coming out of this show is how few of their story beats seem to actually land. The entire main angle with MVP and the BDC is nothing more than a tired repeat of an angle we saw with many of the same people last year (not to mention the other similar incarnations of big heel stable we’ve seen in this company). Lashley is much worse off than he was in the summer of last year, the X-Division has all but disappeared again and Storm’s band of weird, interference prone misfits usually come off as goofy at the best of times. The only story that seems to be clicking is EC3/Spud and they’re approaching their conclusion. This show was largely fairly dull. None of the characters are connecting.

Nobody seems to have any momentum and there doesn’t really appear to be a clear vision of how this company is going to work its way off of Destination America in the long run. The next six weeks of TV should be carried by the UK crowds to passable at the very least but I really worry for this show when they return to Orlando in March. Last year we saw decent enough shows in England and Scotland followed but three months of utterly awful television emanating from the iMPACT! Zone. I fear we may see a repeat of that this year. 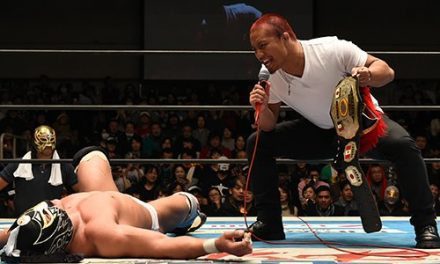